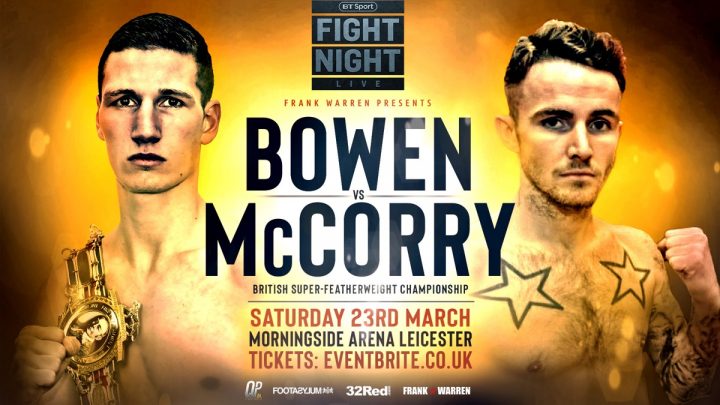 SAM BOWEN: “I’m very excited to be defending my title in Leicester. It is literally on my door step and I have a vast amount of support coming. I have a lot respect for Jordan. He has taken a fight when others wouldn’t. He is fit and can use a few different styles. I have to get the win and will do what it takes. I want a Lonsdale belt for keeps, but it depends on how long it takes to get it. I am happy to fight Woodstock whenever he is ready. It is an easy earner and it will finish his career.”

JORDAN McCORRY: “I bring more than aggression now Craig Dixon is training me. He has installed something different and I don’t go forward like I used to. It would be dynamite to win and I am doing it in the lion’s den. I don’t know if Sam is hype. He hasn’t fought anyone that good, but he does seem an avoided fighter. I’m a Celtic fan and I haven’t got a problem with Sam wearing a Leicester City shirt, but I have with Brendan Rodgers. He is snake.”

NATHAN GORMAN: “Kevin knows his way around the ring and I will just have to do my best even though it is four days’ notice. I was preparing to fight someone totally different. Kevin has only been stopped by Anthony Joshua and on a cut by Petar Milas. My friend Daniel, Vitali Klitschko, Tyson Fury and Kubrat Pulev couldn’t stop him. He is probably the most durable fighter on the planet.” “If it was down to me I’d fight Daniel Dubois this Saturday truly, but I reckon it will probably be end of the year. Whenever he is ready. My style beats Dubois 24/7 and if I can’t see his punches coming I’m not a gifted boxer.

SAM MAXWELL: “I have been asking for a title fight, Frank Warren and MTK have delivered. Some of my peers on Team GB are superstars and it looks like I am further back. I want to be where they are. By the end of the year I will be better known to the public. Sediri boxed at a high level as an amateur and is tricky. He will test me and people will see me at my best. I will have to work and this contest will propel me. I will be looking at Ohara Davies, Jack Catterall and the WBO champion Maurice Hooker by the end of the year. I want Ohara. I have the beating of him.”

LYON WOODSTOCK: “I would fight Sam Bowen for free. He says he will fight me whenever I want it. I want the British title whether Sam or Jordan has it. The loss to Archie wasn’t a setback. Those who makes mistakes progress further in life if they have character and that is what boxing boils down to. It wasn’t a reality check. It made me approach things in a different way.”

CJ CHALLENGER: “This is the same as every fight and there is no extra pressure because we are both local fighters. It’s an honour to be involved in a fight like this. Kyle is a good guy and no mug.”

KYLE HAYWOOD: “People in Leicester are going mad for this fight. It is a 50-50 fight and brilliant for the fans in Leicester. CJ is a good fighter, good mover, has good skills. It is up to me to close the gap and operate at my pace. It will be so exciting. There isn’t animosity, but he is standing in my way.”

LYON WOODSTOCK insists he would jump at the chance to fight British super-featherweight champion Sam Bowen if he was given enough notice.

The bitter local rivals are both in action at Leicester’s Morningside Arena on Saturday night, when Bowen makes the first defence of his domestic title against Jordan McCorry, live on BT Sport.

Woodstock is on the comeback trail after losing his unbeaten record to fellow prospect Archie Sharp in the same ring last October.

Bowen’s team have accused Woodstock of previously turning down the chance to challenge Bowen last month.

Woodstock blames the lack of notice, and snapped: “It was two weeks’ notice, come on man.

“What smart person that rates themselves in any kind of way is going to take a 12 round British title fight at such short notice?

“I am not selling myself short. I know my worth, what I have come here to do and what I am about.

“Had I been given enough time, I would have taken the fight 100 per-cent.”

Frank Warren promotes both boxers and seems certain to match the feuding fighters who live just 13 miles apart against each other in the coming months.

“It didn’t materialise and it is what it is, but the British title is my goal whether he has got the belt or it is vacant.

“By the end of 2019 in my head, I will be the British champion. Give me notice and I will fight Bowen.”

Woodstock is back in action at the Morningside Arena in Leicester on Saturday night in support of the British super featherweight title clash between the champion Sam Bowen and Scot Jordan McCorry. CJ Challenger and Kyle Haywood fight for the vacant Midlands Area super welterweight title takes place on the same bill. Among the other stars in action include Tommy Fury, Nathan Gorman and Sam Maxwell.

Sam Maxwell knows claiming the WBO European super-lightweight title against Kelvin Dotel on Saturday will make him a target for domestic rivals.

The heavy handed ‘Super’ (10-0-KO8) faces Spain’s Dotel on Frank Warren’s Leicester show – live on BT Sport – and is relishing the prospect of significant exposure in his first title fight as a professional.

Maxwell said: “With a big win on TV and a title to my name, I’ll be in the perfect position to book more fights against big names in the division like Ohara Davies.

“Davies has always one I have wanted to face in the future because I want to test myself against the best fighters domestically.

“As a professional, sometimes I’ve fought without pressure because I’ve fought so early or so late and cards and not many are around to see it. Therefore I’m under less pressure to look good. Now I have that extra push.

“I know Dotel’s record and that he’s beaten a few good guys. He’s fought at a good level and is not someone I can afford to overlook.

“I’ve watched some of his fights on YouTube and he looks like a solid all-round boxer. He’s got a good textbook guard, he’s got speed and he’s got power, so it’ll be a good fight.”

Maxwell was last in action back on the Josh Warrington vs. Carl Frampton undercard back in December, when he became only the second man to stop Jamie Quinn in more than 80 fights.

Undefeated star Troy Williamson hopes his patience will be a virtue when he returns to the ring at the Leicester Arena on Saturday.

Williamson (8-0-1-KO5) is set to face Yasin Hassani on the bill in Leicester, and the man known as ‘Trojan’ is looking forward to showing that his extended stay inside the gym over the last few months has worked out well.

Williamson said: “I’m looking to start the year off with a bang. Preparations have been great training wise, as I stayed in the gym all over Chistmas and the start of the year while I was patiently looking for a date.

“We’ve finally got one and now I’m excited to be fighting. I’ve been in camp for about eight to ten weeks now, so I’m looking forward to putting it all into play on Saturday.

“My opponent looks durable and has got a winning record, but he doesn’t seem to be the biggest of middleweights so I’ll be showing my size and strength in the ring on Saturday, and over the eight round distance I’m confident of getting him out of there.

“I had a good learning year inside the ring in 2018, and hopefully I can push on now in 2019 and make it a bigger and better year for myself.”

The bill in Leicester is also set to feature another undefeated star, with Sam Maxwell scheduled to make his return to the ring.

Former Team GB sensation Sam Maxwell is confident he can harness the pressure of his first professional title fight at the Leicester Arena on Saturday night.

The heavy-handed Liverpudlian (10-0-KO8) faces Kelvin Dotel for the WBO European super-lightweight crown live on BT Sport and rather than try to dispel the nerves, he’s looking to channel them.

Maxwell said: “I’m excited. There are definitely a few nerves around. I’ve put a bit of pressure on myself because I really want to perform on the night.

“It’s important when you get chances like this to look good so that people want to see more of you. I know I box well when I’m relaxed and focused but this show is a prime spot so it’s a balance between that and sheer excitement.

“This is the chance to show my levels so it’s only going to have an effect on my performance in a positive way. I want to be my best yet and I know I will do just that on the night.

“I think I’m right up there when it comes to the best-kept secrets in boxing. I feel my 10 fights so far have gone under the radar so I’m hoping to show people what I’m really about on Saturday.”

Tickets are available from £40 are on sale NOW via Eventbrite

« Buatsi vs. Conroy at the Copper Box Arena on Saturday – live on DAZN & SKY

David Lemieux vs. John Ryder added to Canelo-Jacobs card on May 4 »