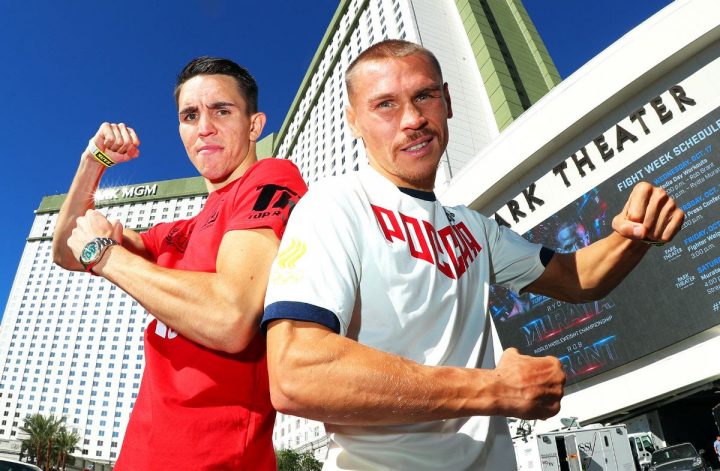 Vladimir Nikitin and Irish sensation Michael “Mick” Conlan are on a collision course for a rematch of their quarterfinal bout from the 2016 Rio Olympics, won by Nikitin via highly controversial decision. Nikitin will fight Juan Tapia (8-2, 3 KOs) in a six-round featherweight bout on the undercard of Conlan’s 10-round featherweight tilt against Ruben Garcia Hernandez on Sunday, March 17 at Hulu Theater at Madison Square Garden.

Conlan-Hernandez will be the special attraction for this special St. Patrick’s Day card, with the welterweight showdown between Luis Collazo and Samuel Vargas serving as the main event. In the newly announced co-feature, two-time Irish Olympic bronze medalist and former world title challenger Paddy Barnes (5-1, 1 KO) will look to get back in the win column against Oscar Mojica (11-5-1, 1 KO) in a six-rounder at bantamweight. Barnes challenged Cristofer Rosales for the WBC flyweight world title last August and lost via fourth-round knockout.

Conlan-Hernandez, Barnes-Mojica and Collazo-Vargas will stream live and exclusively at 6 p.m. ET on ESPN+, the direct-to-consumer sports streaming service from The Walt Disney Company’s Direct-to-Consumer & International segment and ESPN. The entire undercard, including Nikitin-Tapia, will stream live on ESPN+ beginning at 3 p.m. ET.

“The fight I want after I take care of business on March 17 is Michael Conlan,” Nikitin said. “He wants revenge, and I want to show everyone that I was, and still am, the superior fighter. I respect Michael and his team. While there is no bad blood outside the ring, we have unfinished business inside the ring.”

Nikitin (2-0, 0 KOs) was a standout amateur for his native Russia who won medals at the European Championships and World Championships. At the 2016 Rio Olympics, his disputed decision over Conlan advanced him to the medal round and made headlines around the globe. Conlan’s double middle-finger salute to the AIBA-appointed judges became the indelible image of the Rio Olympics. As a pro, Nikitin has won a pair of dominant six-round decisions and hopes another victory sets the stage for the long-awaited rematch.

In other undercard action:

Joseph “Blessed Hands” Adorno (11-0, 10 KOs), the 19-year-old power punching prodigy, will face the durable Victor Rosas (10-8, 4 KOs) in a six-rounder at lightweight. Adorno has seven first-round stoppages on his ledger.

Bronx native Josue “The Prodigy” Vargas (12-1, 8 KOs) will take on Adriano Ramirez (10-2, 6 KOs) in an eight-round super lightweight bout. Vargas has won six in a row since a controversial disqualification loss.

Lee Reeves (2-0, 2 KOs), a two-time Irish national champion as an amateur, will continue his professional journey against Eduardo Torres (1-1, 0 KOs) in a four-round welterweight fight.

Use the hashtags #ConlanHernandez and #TheConlanRevolution to follow the action on social media.