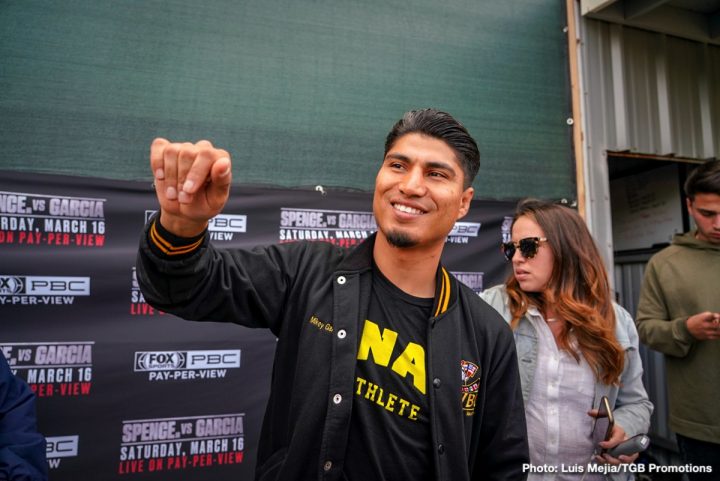 By Dan Ambrose: Vasyl Lomachenko says Mikey Garcia (39-0, 30 KOs) cannot beat Errol Spence Jr. when they face each other next Saturday night due to his lack of size. Lomachenko feels that Garcia is too small to be taking on the 5’9 1/2″ IBF welterweight champion Spence, who he rates as one of the best at 147.

“No, Lomachenko said to Hoopjab when asked if Mikey can beat Spence. “Too much big difference in size. Too much. Errol Spence is a good boxer. He’s one of the best, but we’ll see.”

Mikey, 31, supposedly sees something in Spence’s fighting that makes him believe that he can beat him. Whether it’ Spence’ seemingly simple style of fighting, or his lack of hand speed is unknown. Mikey believes that he’s got the talent to beat him. Mikey showed that he can beat light welterweights when he defeated Sergey Lipinets a year ago in March in winning a 12 round unanimous decision, but he hasn’t fought a welterweight yet.

WBA Super World 147 lb champion Keith ‘One Time’ Thurman says he doesn’t like the competition that Garcia has been fighting recently to prepare him for the Spence fight. Thurman says he would have liked to have seen Mikey fight Danny Garcia to get prepared for Spence. Mikey’s last four fights since coming back from his 2 1/2 year layoff from boxing have come against the rail thin Robert Easter Jr., Sergey Lipinets, Adrien Broner, Dejan Zlaticanin and Elio Rojas. Those are good fighters, but none of them are Errol Spence. Those are all lesser fighters every last one of them, and Spence is far superior than those guys in every department. Easter is a good fighter, but he’s a beanpole at 135, and he’s too skinny for him to prepare Garcia for Spence.

“Mikey is the smaller guy,” Keith Thurman said in commenting on the Spence vs. Garcia fight. “He [Garcia] does have a respectable punch. I think it can still be a respectable punch at 147, because a punch is a punch is a punch. You can normally carry it up in weight. It’s more is he going to land that punch. He didn’t drop Adrien Broner. Adrien Broner’s not the biggest dude. Adrien Broner isn’t the slickest and have the best defense, but he does keep his hands up pretty nice. I just don’t like Mikey’s competition prior to Errol Spence. Jumping and fighting these guys and jumping to the upper levels of the welterweight division. I’d rather see Garcia vs. [Danny] Garcia, but he’s [Mikey]. adamant about this. He’s getting what he asked for, and we’re going to see if he can live up to his word. I told everybody he must have a magic trick up his sleeve to fool us, because I’m not convinced,” Thurman said.

Thurman brings up some good points about Mikey not being able to hurt Broner, and put him on the canvas when the two of them fought each other in July 2017. Although Broner lost a wide 12 round decision, he was never hurt for an instant in that fight, and he was even taking the fight to Mikey in the second half of the contest. Mikey’s power isn’t the same at 140 and 147 as it was when when he fighting at 126, 130 and 135. Garcia is a much bigger puncher in those weight classes compared to how he’s likely to beat when he gets in there with Spence at 147 on March 16. We can’t know for sure how much power Mikey will have at welterweight, because he’s not fought at that weight. Mikey is being given a world title shot by Spence without him having proven himself in the welterweight division.

Mikey has bulked up a lot with his training at the SNAC facility in San Carlos, California, so that might improve his punching power to some extent. Whether it’s enough for Mikey to hurt Spence remains to be seen. Thurman didn’t mention how Garcia will be able to adjust to getting hit by a much bigger puncher in Spence compared to the guys he’s been facing in the lower weight classes. It’s going to be a much different experience for Mikey than what he’s been dealing with in the past.

While it’s obviously true that Mikey has been sparring with bigger guys in junior middleweight Carlos Adames and middleweight Esquiva Falcao, those fighters don’t possess Spence’s talent. If they did, they would be world champions by now instead of contenders. Mikey is wearing headgear and those guys wearing large gloves in the sparring with him. There won’t be any headgear or large gloves that will help Mikey survive the rounds with Spence on March 16. If Mikey can’t handle the power of Spence, then he’s going to have problems.

“If you lose to a good fighter, you’re supposed to lose to him,” Roy Jones Jr. said about Mikey Garcia stepping up to fight Spence. “If he beats a good fight, he shocks the world. I think it’s a good idea,” Jones Jr. said in voicing his approval of Mikey moving up two weight divisions to challenge Spence for his IBF welterweight title.

Roy Jones Jr. doesn’t see there being anything for Mikey to lose in stepping up two weight classes to fight Spence. Jones sees the fight as a win-win for Mikey. If he loses, then he was meant to lose to Spence because he’s the bigger guy. If Mikey beats Spence, then he’ll shock the world with the victory. What Jones isn’t saying is that Mikey could potentially get badly hurt by Spence if he stays out there too long soaking up punishment. A lot of boxing fans doubt that trainer Robert Garcia will allow his brother Mikey to take a beating from Spence. If the fight starts looking one-sided, which it could very well be early on, Robert is expected to throw in the towel to save his brother from taking a beating. Robert had Mikey’s fight with Orlando Salido stopped after the seventh round when the match was seemingly changing hands in going in Salido’s favor. Robert told the referee that Mikey had a nose injury. The fight was then stopped, and went to the scorecards. Mikey won a seven round technical, but it looked to some like Robert saw that he was done, and starting to get worked over by Salido, so he had the fight stopped.

“We haven’t given Mikey enough credit for it,” Floyd Mayweather Jr. said about about Mikey taking on Spence. “He can box. I boxed Errol Spence, and I’ve been in there with Marcos Maidana. Errol Spence, he’s tough; he’s strong. He hits good. If you’re sitting right there, he can bang. I’ve boxed the hardest punchers in the sport of boxing. He can hit. He’s tough. Errol Spence, that’s a dangerous fight for Mikey Garcia,” Mayweather said.

Mayweather says it himself that he’s worried for Mikey in this fight. Mayweather has sparred with Spence in the past many years ago, and he felt his power. Mayweather reportedly had a lot of problems with Spence during that sparring session, which took place before Errol had turned pro.

“I think Spence,” Manny Pacquiao said in giving his prediction of the Spence vs. Garcia fight.

Pacquiao is saying the obvious in picking Spence to win. It’s hard to pick Mikey to win, because he’s so small, and lacks the size and experience to say that he’s going to win the fight. If Mikey had experience in fighting the likes of Thurman, Danny Garcia, Pacquiao, Shawn Porter or Terence Crawford, then it would be easy to pick him, but he’d not fought anyone yet at 147.

“It’s a difficult task,” Golden Boy Promotions CEO Oscar De La Hoya said about Mikey’s fight with Spence. “I’m rooting for Mikey. I give him all the credit in the world. I think Mikey has all the guts in the world to fight the welterweight world champion. Two weight classes, it’s a huge task, but I’m with him 100 percent. I’ve never seen a small good man beat a good big man. I should know. I went up six weight divisions. It got tougher, tougher and tougher. I wish him the best. I’m hoping for a great fight,” De La Hoya said.

De La Hoya going with Mikey, but it sounds like he’s picking him because he likes him rather than him truly believing he can win the fight. That’s bad when you’re only picking a guy because of you personally liking them instead of it being a case where yo actually believe he can win.

“I think he’s too small for him, but he sees something we don’t maybe,” trainer Freddie Roach said about Mikey Garcia. “He’s very brave in taking that fight.”

Trainer Freddie Roach makes it pretty clear that he doesn’t see Mikey winning this fight against Spence. Roach seems mystified why Mikey has chosen to make this step up. It has mismatch written all over it. Hopefully the plug isn’t pulled early on the fight by Mikey’s trainer Robert Garcia when things start getting out of hang.