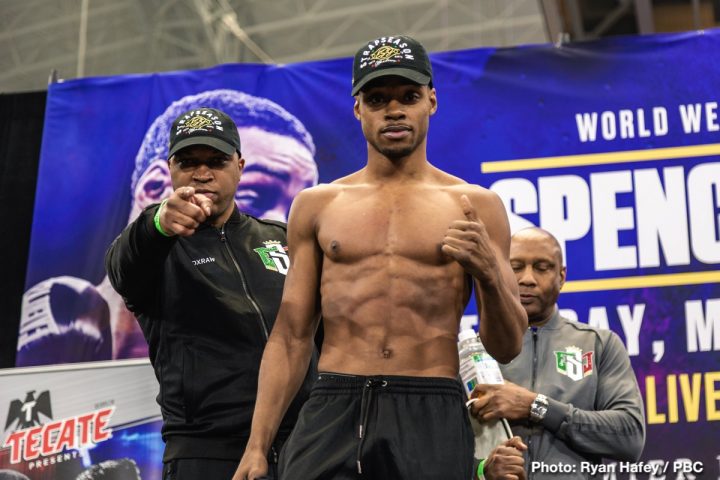 In a battle of unbeatens, Mikey will be moving up two weight classes tonight to fight Spence on Premier Boxing Champions on Fox Sports pay-per-view at the AT&T Stadium in Arlington, Texas. Fight action begins at 9:00 p.m. ET/6:00 p.m. PT. There’s a lot on the line for both fighters. Spence can’t afford to lose to a fighter that is so much smaller than him, and who is coming up in weight 2 divisions. If Mikey is able to the go the 12 round distance, Spence will look bad, If Mikey makes Spence struggle to win the fight, it’s a victory for him, even if he loses the fight. The conventional wisdom is, the only way Spence comes out ahead in this fight is if he scores a fast knockout over Garcia. Needless to say, Spence has massive pressure on him tonight to make it look easy against the 5’6″ Garcia.

Whether the fight goes the distance or not, Garcia is going to have a bad night at the office, according to Kenny, who has seen a lot of Spence over the years in watching him train and fight as a pro. Kenny knows what Spence is capable of doing to an opponent. He doesn’t see how Mikey will be able to do anything with Spence that will him a shot at winning tonight.

“No disrespect to Mikey Garcia, but that statement he made, that he’s a little bit better than Errol in every aspect is actually the other way,” trainer Kenny Porter said to Fighthub. “Errol isn’t just a little bit better [than Mikey Garcia]. He’s A LOT better in every aspect in what they’re going to be dealing with tomorrow. [The] advantaged in speed, the advantages in power, and advantages in size [for Spence]. There’s no advantage in experience in fights, but the kid has been so far ahead of the curve, even when he was in the amateurs,” Kenny said.

Kenny Porter sees the Spence vs. Garcia fight in a completely different light than his son, World Boxing Council welterweight champion Shawn Porter, who views the Spence-Garcia fight as a toss-up that could go either way. Shawn says it’s so close that he can’t decide who will win the fight. But what he does say is he hopes Mikey wins. Shawn likes Mikey’s experience, speed, power and ring IQ. Shawn doesn’t see Spence’s size as being a factor, because he doesn’t rate size as being as important as experience and ring IQ. Porter is hoping to fight the winner of the Spence vs. Garcia fight tonight, and he’s said that he’ll walk into the ring after the bout to let the fans know that he wants the winner. This could be embarrassing for Porter if he’s not allowed into the ring. Spence has more than just Porter as an option for him if he beats Mikey. There’s Manny Pacquiao, Keith Thurman and Terence Crawford. All three of those fighters are unquestionably better options for Spence when it comes to attracting attention from the boxing public. Porter is a good fighter, but he’s coming off of a questionable 12 round decision win over Yordenis Ugas last Saturday night on March 9, and a lot of fans thought the talented Cuban fighter should have been given victory.

“He’s home [fighting in his home state of Texas], he’s happy. He’ll be successful,” Kenny said about Spence. “If it goes the distance, it’s not a good night for Mikey. I don’t think it’s going to be a good night at all. Whatever happens in the ring, we’ll be standing right here,” Kenny said about his fighter Shawn Porter waiting to face the winner of the Spence vs. Garcia fight.

For obvious reasons, Garcia has a lot less to lose in this fight than Spence. Garcia is smaller, weaker, older, and is moving up two weight divisions to challenge Spence. If Garcia loses the fight, then he was meant to lose because he lacked the size to compete with a guy two weight classes larger than him. No one will fault Mikey if he gets beaten by Spence in this fight. It would be a different story if Mikey stayed at lightweight, and suffered a loss to Vasyl Lomachenko or Teofimo Lopez. There’s little pressure for Mikey with him going up to 147 to fight Spence. If Spence loses the fight, he’s going to be hurt by this defense. It won’t be the end of Spence’s career, but it’s going to cause him to take a big hit in his popularity. Spence is still young enough and talented enough to target Shawn Porter, Keith Thurman, Pacquiao or Terence Crawford. It’s doubtful that those guys would readily agree to fight Spence, even if he were coming off of a loss to Garcia. They would have an excuse not to fight a still dangerous Spence. As such, a loss for Spence tonight would be a tremendous career setback for him, likely resulting in him being pushed out of a title picture for at least a year if not more, depending on if his adviser Al Haymon of PBC could arrange a fast rematch with Garcia or a title shot against Thurman, Porter or Pacquiao. Since this is a voluntary defense for Spence tonight against Garcia, he likely has a rematch clause in the contract for the fight. So even if the unthinkable were to happen, with Spence losing to Garcia, he would be able to get an immediate rematch. Garcia is an unpredictable fighter. If he beats Spence, he could vacate the IBF welterweight title like he did with his IBF 140 lb belt last year after the sanctioning body ordered him to face a dangerous Ivan Baranchyk. If Mikey doesn’t want to deal with a rematch with Spence, he could vacate and turn around and take on Manny Pacquiao for his WBA ‘regular’ welterweight title in what would likely be a big pay-per-view fight on Fox or Showtime.

The fight that should have been happening tonight is Spence vs. Shawn Porter. Had Porter not taken the Ugas fight, he would be the one facing Spence tonight. Spence says he wanted to fight Porter, but Shawn opted to face Yordenis last weekend instead in taking the “easy” route, according to Spence.