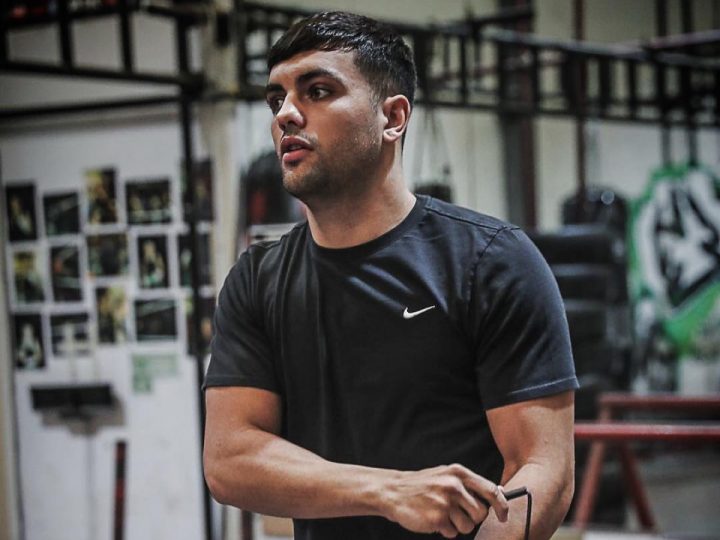 ‘El Gato’ (23-0-KO12) is in line to face the winner of the bout having held the WBO Inter-Continental super-lightweight title for the last four years and is keen to watch reigning champion Hooker up close.

Catterall said: “This is serious business. It’s my job and all part of the work I do. I could’ve watched him, studied him from home and worked out how to beat him but this is better.

“As well as wanting to watch him up close and personal, I’m also there to let him know I mean business. I’m a gentleman and I’ll be respectful but it’s no secret I believe I’ve the beating of him.

“People will pick up on the fact I’m there but I’m there to watch him fight. When I’m the one fighting him, it’ll be time for me to take over and start my reign at the top.

“I’ve no doubt it’ll spark that extra bit of interest from the fans. They know I’m on track to get this fight and maybe it’ll lead to more people talking about it and some renewed momentum.

“I haven’t bothered watching Lespierre. If he wins then obviously I’ll take notice but he suddenly appeared in the rankings and it doesn’t look like he’s done much to earn the shot so I expect Hooker to pick up a good win.

“Regardless of all this, I’ll always be respectful. They call me ‘Gentleman Jack’ for a reason and I’ve not worked all the way to this point to get here and decide I want to be somebody else. My conduct will be the same as it’s always been.”

Catterall was last in action outpointing the heavy-handed Ohara Davies in Leicester back in October.

The reigning WBC world flyweight king has been with MTK Global since 2015 and achieved a life-long dream of winning the famous green belt with a stunnig display against Cristofer Rosales back in December.

Edwards said: “MTK Global changed my career around and I’ve grown massively since joining them. When I first joined them, they put me up in Marbella and got me sponsorship so I could dedicate myself fully to the sport I love.

“MTK Global has come through with everything promised. I had an IBF title shot in my ninth fight and that gained me valuable experience. Then I got the WBC shot and became a world champion. I’m really grateful to them.

“There’s so much more to come from this partnership. This is only the beginning and now it’s a new chapter. The world is my oyster as world champion and I want to unify the division.

“With MTK Global behind me, I believe I can go on to become a multi-weight world champion. I just have to focus on living the life. I’m blessed to have the best management team out there.”

MTK Global President Bob Yalen said: “This is another great coup for the company, and we’re so proud to be continuing our work with one of the exceptional talents in the world, and an outstanding young man, in Charlie.

“Back in December, the boxing world saw what a great talent this young man is, and as well as proving himself a world-class champion inside the ring, he’s grown into a world-class role model and ambassador for the sport outside of it.

“From our perspective, his decision to extend his deal shows that while we continue to sign up elite talent, we always ensure that fighters with MTK Global are receiving the care and attention they need and deserve. Of that, we are proud.”

MTK Global is delighted to announce the signing of exciting amateur star Adam Gair as he turns professional.

Gair was very successful during his amateur career, reaching the ABA semi-finals and winning five North East titles, and he’s now looking forward to making the switch to the paid ranks.

Gair said: “I’m excited to turn professional. MTK Global is a massive platform and it’s great to be with them. It’s time to strike while the iron is hot and show what I can do in the ring.

“I had other offers on the table, but when I sat down and had a good think about it, I knew that MTK was by far the best choice and they’re going to push me in the right direction.

“As an amateur I’ve boxed all of the top lads around the country one after the other and it’s been hard to get matched up, so that’s why I think it’s the right time to turn over.

“It’s got to the point where I’ve given the amateurs everything I can. I was ranked number one in the country, and recently got to the ABA semi-finals after knocking two lads out along the way.

“I was stopping people in the amateurs over three rounds, so I’m looking forward to seeing what I’m capable of as a professional with smaller gloves.”

Promoter Lee Eaton added: “We’re thrilled to announce the signing of Adam Gair. He’s looked extremely impressive as an amateur, and we’re confident he will transfer that into the professional ranks.

“He’s had plenty of success during his amateur career, and we’re looking forward to keeping him busy as a professional and matching him up well.”