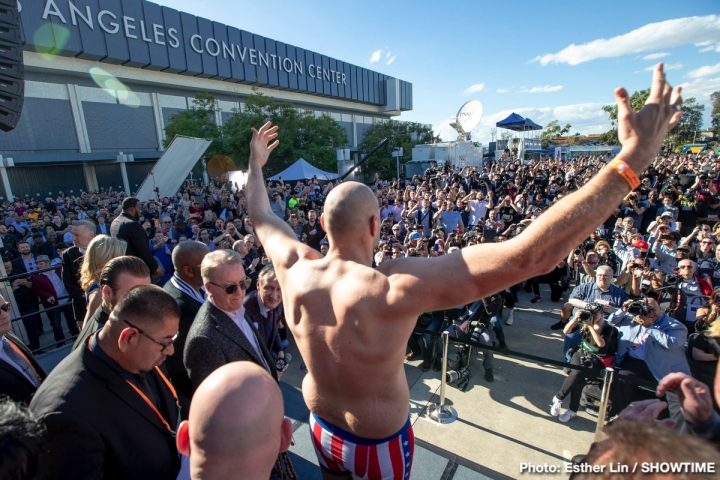 By Tim Royner: Tyson Fury says he’s following the game plan that was given to him by his team about building up his fight with Deontay Wilder on ESPN before they face each other in a rematch in 2019. Despite the worry from boxing fans that the Wilder-Fury fight will never happen, Fury states that it will be taking place this year “100 percent.” That’s the plan.

A lot of boxing fans have noticed that Fury’s attitude has changed changed since the news broke of him signing with Top Rank to fight on ESPN. They feel that Fury doesn’t care who he fights now that he’s been given a big contract from Top Rank. During the interview, Fury he seems totally unconcerned about who he fights. Is that because of the new deal that Fury was given by Top Rank? Has the money taken away Fury’s ambition to fight the best? It’s disappointing to some boxing fans to see how Fury isn’t resisting the notion of him fighting interim matches against lesser guys. The fans want to see Fury showing ambition. He sounds really passive now.

It’s believed that Top Rank/ESPN won’t take any risks with Fury after signing him to a five-fight contract. If Fury were to lose to Wilder in the first fight of the 5-fight deal, then hi popularity would drop off to next to nothing, and that would leave ESPN with a guy that can’t pull in subscribers to their ESPN+ app. That’s a monthly a subscription streaming service that goes for $4.99. Fury will help bring in subscribers, but not if he gets beaten by Wilder in his first fight of his five-fight deal.

Fury’s new promoters at Top Rank Boxing want to let the rematch with the hard hitting Wilder build before they make the fight. Their belief is the Wilder vs. Fury II fight will be bigger after they take an interim fight in between.

“Wilder is unknown in the U.S. We have to get him more known by having key fights on ESPN, and then doing the pay-per-view fight,” Fury said to IFL TV in explaining why he’s not fighting Wilder next. “Yeah, I’m going to have another fight in between, and then I’m going to deal with Deontay. 100 percent [Wilder fight is happening in 2019]. ESPN, we can make anything happen,” Fury said.

WBC champion Wilder (40-0-1, 39 KOs) was given an offer to fight an interim opponent on ESPN, but he rejected it, says Fury. Wilder is a promotional free agent, he says, so it’s possible that he could come over to ESPN if he were to sign with Top Rank. It would likely take the promotional company a lot of money to sign the 2008 Olympic bronze medalist.

“I’m fighting Amir Khan. He’s moving up to heavyweight,” Fury said in a kidding manner. “Take your pick [of who Fury should fight next]. There’s hundreds of them, aren’t there? I might give Sefer Seferi a rematch, because he was a nice guy, and he got injured in his last fight, so I might give him a rematch,” Fury said.

All the repeated questions that Fury has had to deal with about who he’ll be fighting next seems to have worn him down. He’s now having fun with talking about the possible opponents. Fury stopped 39-year-old cruiserweight Sefer Seferi in the fourth round in his first fight of his comeback last June in Manchester, England. Sporting a 66 pound weight advantage in the fight, Fury used his size to dominate the smaller 6’0′ Seferi. The size between the two fighters made it look like comedy.

Fury has ruled out fighting former WBO heavyweight champion Joseph Parker next, saying that he sees him as a “brother”, and he doesn’t want to fight him. That probably make Parker too happy, as he can make good money fighting Fury. He might even beat him. It’s doubtful that Top Rank Boxing seriously consider a fighter of Parker’s class for a fight against Fury. Parker is a dangerous fighter due his punching power, and he’s got more than enough skills to give Fury problems for as long as the fight lasts. Although Fury would be considered a big favorite to beat Parker, he could still lose the fight if he gets hit on the button. Fury has been dropped in the past by Wilder, Neven Pajkic and Steve Cunningham. Parker hits harder than Cunningham and Pajkic. He could do damage to Fury.

“I keep seeing this in the papers [Fury vs. Joseph Parker fight speculation], but me and Parker are like brothers. So do you fight your brother? No,” Fury said. “I’m looking to fight whoever. I’m ready now. I’m going to make whatever fight. There’s plenty of fights out there. I’m not dancing to nobodies’ fiddle,” Fury said.

The whole premise behind Fury and Wilder fighting lower level fighters in interim bouts in order to build up a rematch between them is a faulty idea. The American boxing fans aren’t going to care about seeing those two heavyweights fight obscure journeyman level guys or fringe contenders. It’s not going to raise the profile of Fury or Wilder if they’re going to face mediocre opponents. Even if the opposition are technically contenders, the casual and hardcore boxing fans in the U.S aren’t going to be excited about those fights, because don’t know who the bottom dwellers are.

News:
Deontay Wilder sends message to Andy Ruiz Jr.: 'Get back in the gym'

The U.S boxing can’t be fooled. Sticking journeyman in the ring with Fury isn’t going to help him. Wilder, as the World Boxing Council heavyweight champion, can’t fight a poor opponent in his next fight, because his WBC mandatory is due. Wilder will have to face Dominic Breazeale next. That’s a risky fight. If Fury is just going to fight scrubs in the U.S on the ESPN+ app, he’s not going to become popular. The fans see too many mismatches as it is, and they don’t get excited about them. IBF/WBA/WBO heavyweight champion Anthony Joshua is making the same mistake in facing Jarrell ‘Big Baby’ Miller, and believing that he can become popular in the United States on the cheap without having to fight someone good.

It was Joshua’s promoter Eddie Hearn’s brainchild to have him fight the 315 pound Miller in the U.S, thinking that will transform him into a star. It would work if the American boxing fans saw Miller as a big name, and a major talent. But the casuals have no idea who Miller is in the U.S, and the hardcore boxing fans only know him from the soft opposition that he’s faced on American television. Even before Hearn signed Miller to a co-promotional deal and started feeding him old, over-the-hill guys, Miller had been fighting poor opposition. That’s why he’s not been able to build a fan base. Hearn is wasting Joshua’s time by matching him against Miller. Whatever the case, that’s how Hearn is going to try and turn Joshua into a star in the U.S, and Top Rank is likely going to follow Hearn’s idea by matching Fury against lesser fighters, hoping that the American fans will see him and get excited.

“Deontay Wilder has been offered to fight me on ESPN, and he’s turned it down,” Fury said in saying that Wilder turned down fighting an interim fight against another opponent on ESPN. “His a– is twitching. Everybody has got a plan. I’m just following the game plan, that’s all I’m doing. My game plan is to keep busy, keep active, and enjoy my life,” Fury said.