By Scott Gilfoid: Matchroom promoter Eddie Hearn doesn’t think too highly of lineal heavyweight champion Tyson Fury’s choice of an opponent in him facing Tom Schwarz for his debut with his new co-promoters Top Rank Boxing on June 15 at the Thomas & Mack Center, in Las Vegas, Nevada. Hearn is really gloating in seeing Fury stoop to the level of fighting soft jobs. After all the criticism Anthony Joshua received for his many mismatches against weak opposition since turning pro in 2013, it’s now Fury’s turn to do the same, and Hearn is having a laugh at his expense.

When Fury inked with ESPN, he was supposed to fight the best, and here he is showing his true colors, is what Hearn is hinting at.

Hearn sees it a “dreadful” fight, because Fury is facing a heavyweight that he personally feels isn’t even a top 15 ranked contender. The truth is, the 6’5″ Schwarz (24-0, 16 KOs) is ranked #2 with the World Boxing Organization.

None of the other sanctioning bodies have the German heavyweight ranked n their top 15, however. The WBO sees something in Schwarz that makes them believe he’s worthy of a top 15 ranking.

“Dreadful fight. You just fought Deontay Wilder, and you basically beat Deontay Wilder,” Hearn said to IFL TV. “I know it was close, but most people had him winning the fight. They ordered the rematch. He pulled out of the rematch, and you’re fighting Tom Shwarz,” Hearn said about Fury. “If Anthony Joshua did that, what do you think the reaction would be? But I don’t blame Tyson Fury. He’s been given a load of money to have an easy touch.”

So there it is. Hearn is letting Fury have it in royal fashion. It’s kind of a shock to Fury’s boxing fans, and fans as a whole, that he’s decides to take the easy route by getting a load of money from his new co-promoters at Top Rank, and then agreeing to fight the soft jobs that they want him to. Some fans now see the 30-year-old Fury as a sellout, and many of them are surprised and in shock that he would make this move. It’s a big letdown for boxing fans to see Fury agreeing to take on lesser opposition.

It would be surprising if Wilder and Fury ever face each other again. Fury is now on the other side of the fence with him being signed with Top Rank Boxing in the U.S, and fighting on ESPN. Wilder is with Showtime, and he’s about to extend his contract with them for a boatload of money.

“I just feel AJ gets a lot of unfair criticism about who he’s fighting, and then Fury fights Tom Shwarz. No disrespect to Tom Schwarz, but he’s not top 15 in the world,” Hearn said. “I know he’s ranked with the WBO. If you rank the top 15 in the world, he’s not really that close. Tyson is as happy as Larry. He’s getting a load of money for an easy fight. It says a lot about the guy. ‘I’m this, and I’m that,’ and you get a chance to rematch a guy for the WBC heavyweight world title, and face a guy you basically already beat, and setup a monumental undisputed fight, and you turn that down and fight this guy [Tom Schwarz]. You’re going to get stick, aren’t you? Good luck to him,” Hearn said.

The boxing public will give Fury a pass for the Schwarz fight, but if he keeps taking the soft jobs into the future, the fans are going to turn on him big time. It’ll bad, I tell you. With all the sweet cash Fury is getting from his new promotional contract with Top Rank/ESPN, I’m sure he’ll cry all the way to the bank. 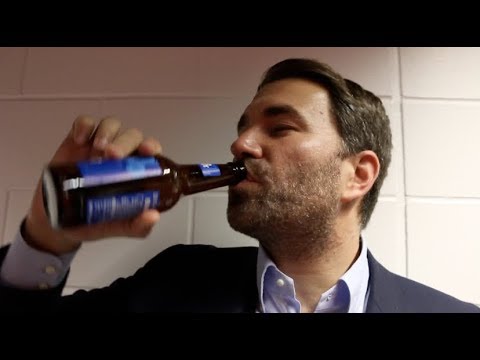