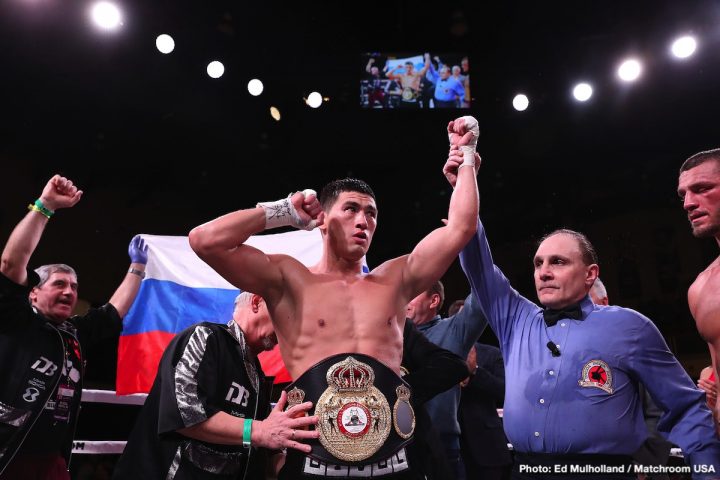 Bivol, known for his accuracy and multiple punch combos displayed tremendous poise and skill against the hard-punching Smith Jr at the Turning Stone Resort Casino. Bivol fought a measured fight and kept his distance from the devastating right hand and left hook of Smith Jr.. The bout was filled with drama, even though Bivol maintained a strong lead on the scorecards. In the 7th round, Bivol landed a clean shot that wobbled Smith Jr., however Smith Jr. refused to fall as he displayed a granite chin multiple times over the 12-rounds.

In the final seconds of the 10th round, Smith Jr. finally landed a flush overhand right. The punch buckled the knees of Bivol, creating a raucous roar from the Joe Smith Jr. crowd. The bell saved Bivol who gamely held the ropes and wobbled to his corner on unsteady legs. Smith Jr. who was seconds away from a dramatic world championship KO victory, came out looking for the knockout in the 11th round, hoping to replicate the blast in round 10 and erase the scorecards with one more punch. Bivol bravely and smartly weathered the storm, and even went on the attack in the final 20 seconds of round 12, of which Smith Jr. gritted out to remain on his feet.

“It was not an easy fight” said Bivol after the fight. Bivol acknowldeged the heavy hands of Smith Jr., “Smith had a big heart, and a strong hands. I caught a right hand on the right side, and I lost my balance a little.”

Star Boxing CEO JOE DEGUARDIA had this to say about Saturday’s fights, “it was a very thrilling night of action highlighted by an exciting main event” (Bivol vs Smith Jr). “I congratulate Bivol and his team and I am proud of Joe, as he showed his heart, determination and shear grit. He is not only the hardest punching light-heavyweight, but perhaps the hardest one punch fighter in the sport today. I know fans will certainly want to see Joe in action again. He is a very pleasing fighter that certainly fascinates boxing fans enamored with his ability to end a fight with one blast.”

In a 6-round lightweight bout, amateur standout, and multiple time national champion, OTHA JONES III (now 1-0) took on GIORGI “GOGA” GELASHVILI (now 5-2 3KO’s). The two waged war from the opening bell, Jones showing great speed in both his hands and feet, while Gelashvili did not back down, settling in after the first two rounds. After a Jones knockdown in the 3rd round, Gelashvili began finding range, but it was too late as Otha Jones took home the victory in his pro-debut by unanimous decision (59-54, 58-55 (x2)).

Unbeaten featherweight prospect José “El Chocolatito” González (12-0-2 4KOs) made a statement by defeating David Berna (17-7, 16 KOs) via dramatic knockout in the first round, in which Gonzalez dropped Berna three times en route to victory in a show-stealing performance from The Amazura Concert Hall in Queens, New York, promoted by Ronson Frank’s Uprising Promotion.

Berna has been in with world-class competition as he was stopped in two rounds by two-time Irish Olympian Michael Conlan, which is a round longer than Gonzalez took to finish his opponent. as well in his last fight fought former world title contender Christopher “Pitufo” Diaz, who also stopped Berna in one round.

For those looking at the nickname, “Chocolatito” and it might sound familiar as former pound-for-pound #1 fighter Roman “Chocolatito” Gonzalez, used the moniker. Well – that is Jose’s cousin. In fact, Jose’s father, Martin Gonzalez was the original Chocolatito, when he was boxing, and Jose Gonzalez looks to be the next great Chocolatito, something that his last performance showed.

“I fight for the pride of my family and to be a good role model to those who look up to me because I am a professional boxer. I am a 22-years-old and it is time for me to fully commit to the sport of boxing. I know that I have a long way to go, but I am here to entertain and put on a great show, I am very excited about the future. I have a lot to learn in and out of the ring, but I will stay humble and grow.” said Jose Gonzalez after the bout.

Gonzalez, who spent a week with famed coach Raul “Chino” Rivas in Cherry Hill, New Jersey, leaving behind his life in upper Manhattan for a week to change things up for this camp. Rivas took to Gonzalez as he assisted him in the corner fight night while Gonzalez’s father ran the corner fight night, which produced the amazing result of a first-round knockout.

“Being able to train beside Tevin Famer, a world champion and work with Coach Chino, who is a great coach as well as work with my father who has taught me everything I know and built the foundation to make me a world champion — it is amazing. I am adding so much to my boxing ability. I have a great team and now it is time for me to focus on becoming a world champion. I am in the perfect situation.”

For those unfamiliar with Gonzalez, he was born and raised in Harlem, New York, holding an amateur record of 34-6, winning the Junior Olympics in 2011 and the New York Golden Gloves in 2014.

“I feel I have the best team in boxing, they’re very professional and when I am more successful as a professional boxer, you will see the fanbase I have in Wall St., as well as my neighborhood I grew up in. I have a unique story, a unique team and a unique skill set, I am ready for the next fight and for fans to form an opinion on the way I fight.”