Dereck Chisora vs. Senad Gashi on April 20 on Sky 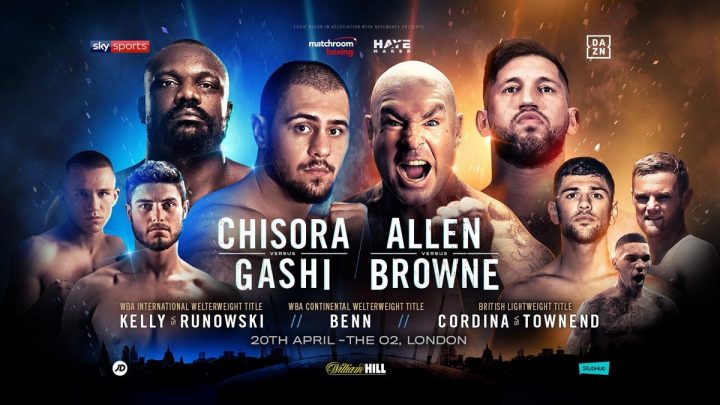 By Tim Royner: In a loaded card next month on April 20, heavyweight Dereck Chisora will be facing Senad Gashi, David Allen will be taking on former WBA heavyweight world champion Lucas ‘Big Daddy’ Browne, welterweight contender Josh Kelly will be battling Przemyslaw Runowski, and Conor Benn will see action as well on DAZN in the US and Sky Sports at the O2 Arena in London, UK.

The reaction by the boxing public to this card has been a mixed one. While the card has a lot of well known names on it, there aren’t a lot of quality fights at the top of the card. For example, Chisora vs. Gashi is a mismatch, and Browne vs. Allen could be the same way. The 26-year-old Allen is looking much young and powerful for an old timer like Browne. It is potentially a very good card though. We don’t know what we’re going to get from Chisora, who is coming off of a knockout loss. Gashi might pull off an upset if he lands one of his big shots on the chin of Chisora.

Former heavyweight world title challenger Chisora (29-9, 21 KOs) was hoping to take on former WBO champion Joseph Parker on the April 20 card, but the New Zealand fighter chose not to take the fight for some reason. Instead, Chisora will be facing Senad Gashi (17-2, 17 KOs) in the main event in a 12 round fight.

Gashi, 28, is coming off of a seventh round knockout loss to Carlos Takam on December 22 last year at the O2 Arena. Gashi has lost two out of his last three fights. Chisora vs. Gashi isn’t a great headliner fight, to be sure. Matchroom Boxing promoter Eddie Hearn stuck with Chisora in the main event rather than changing that status after he couldn’t get Joseph Parker for him.

“Six weeks until I go back to war and boy I can’t wait,” said Chisora to skysports.com. “I will be stepping into the ring at The O2 Arena with fire in my soul. I have a point to prove and a mission to continue.”

Chisora, 35, realizes that he cannot take too many more losses if he wants to keep his career going. Chisora was knocked out in the 11th round by Dillian Whyte in his last fight on December 22 at the O2. Although Chisora gave it a good effort, he still came out on the losing end of another knockout defeat. For Chisora to continue to be still involved in big fights in the division, he needs to start winning against. Gashi isn’t a world class fighter unfortunately, so this fight isn’t going to prove anything. This is more of a stay busy level match-up for Chisora. He’s expected to win with ease. This isn’t the guy that Chisora wanted. Parker was the one that Chisora wanted, and needed to reestablish his credibility.

In the co-feature bout, former World Boxing Association heavyweight champion Lucas ‘Big Daddy’ Browne (28-1, 24 KOs) will be taking on David Allen (16-4-2, 13 KOs) in a 12 round fight. Browne, 39, is coming off of a highly controversial six round points win over journeyman Kamil Sokolowski earlier this month on March 2 in Scotland. Browne was knocked down in the second round by Sokolowski, and beaten to punch the entire fight. Sokolowski, who has made a lot of improvement in his game, was hitting Browne was quick left hooks the entire fight, and landed by far the cleaner, harder shots during the match. Browne was only able to land jabs, as he was getting countered by Sokolowski when he would attempt to throw his slow right hands and awkward looking uppercuts from the outside. A lot of boxing fans saw Browne’s win as highly questionable.

I have never trained so hard in my life,” said Allen to Sky Sports. “I’m going to knock Browne spark out, I hit too hard for him. A win puts me on the big stage. Lucas Browne isn’t the Lucas Browne who beat Chagaev, he’s a faded force.”

A win over Browne might put Allen into the top 15 in the heavyweight division rankings, but that doesn’t mean he’s going to get a crack at a world title. Allen will need to be some solid contenders that aren’t old and shot looking like Browne currently is for him to have a chance for a world title fight against IBF/WBA/WBO champion Anthony Joshua. Allen already lost to Dillian Whyte in 2016, so there’s no chance for a rematch with him. If Hearn wants to ramp Allen up for a title shot against AJ, he’ll need to match him against someone still in their prime and no old like Adam Kownacki, Filip Hrgovic or Joseph Parker. In light of Big Daddy Browne’s performance against Sokolowski this month, Allen isn’t going to prove anything by beating him. Sokolowski did a good job of beating Browne, but he wasn’t given the victory by the referee that scored the fight 57-56 for Lucas.

Welterweight contender Josh Kelly (8-0, 6 KOs) will be facing unbeaten Przemyslaw Runowski (17-0, 3 KOs) in a 10 round fight. Kelly will have his World Boxing Association International Welterweight title on the line for the fight. Kelly, 25, wants to step up for bigger fights this year. Runowski isn’t going to be much of a threat despite having an unbeaten record. It’s up to Matchroom promoter Eddie Hearn how fast he wants to move Kelly. He’s ranked #7 by the WBA right now, but he doesn’t appear to be near ready to challenge WBA ‘regular’ 147 lb champion Manny Pacquiao or WBA Super World champion Keith ‘One Time’ Thurman for their titles. Pacquiao, 40, isn’t going to use up one of his precious last remaining fights facing a guy with no name recognition in the United States like Kelly. Thurman wants to focus on well known fighters as well, but he’s someone that would be ripe for the pickings for Kelly if he could get a shot at his belt.

In other fights on the card, Joe Cordina (8-0, 6 KOs) faces Andy Townend (22-4, 4 KOs) in a 12 round fight. Welterweight prospect Conor Benn (13-0, 9 KOs) faces an opponent still to be determined in a 10 round fight. You just don’t know what you’re going to get with Benn. Although he’s got a lot of power, his defense is nowhere, and his punch resistance leaves a lot to be desired. Benn is a diamond in the rough, and needs a lot of work if he’s ever going to pan out.