Deontay Wilder to fight on May 18 at Barclays Center, Brooklyn, NY 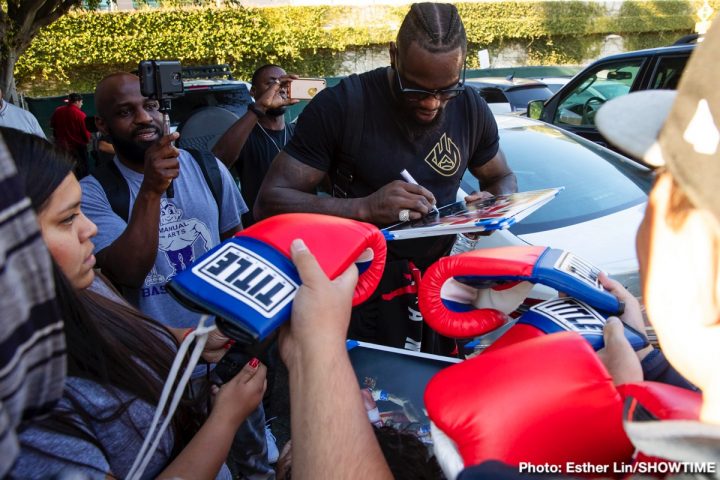 By Jeff Aranow: Deontay Wilder is expected to make his next defense of his WBC heavyweight title on May 18, possibly against mandatory challenger Dominic Breazeale at the Barclays Center in Brooklyn, New York, according to RingTV.

This was the date that Wilder (40-0-1, 39 KOs) and Tyson Fury were planning on potentially fighting each other in a rematch. Those plans changed after Fury (27-0-1, 19 KOs) signed a five-fight contract with Top Rank Boxing and ESPN, who want to let the Wilder fight build momentum by having the two fighters face other opponents.

There’s a chance the WBC will order the Wilder vs. Breazeale fight this week, according to Mike Coppinger.

Breazeale (20-1, 18 KOs) is the opponent that is being mentioned a the guy that Wilder will be defending against. It’s not that Wilder wants the fight with Breazeale, who feels brings nothing to the table for him. It’s the fact that the 6’7″ Breazeale is his mandatory for his World Boxing Council title that he needs to get out of the way. British promoter Eddie Hearn of Matchroom Boxing, plans on speaking to the World Boxing Council to press them to have Wilder’s fight with Breazeale count as a voluntary defense and not a mandatory.

Hearn is going to argue to the WBC that they recently ordered a fight between Breazeale and Matchroom fighter Dillian Whyte, who is ranked #1 with the WBC, for the interim WBC title. The WBC made that move because they thought Wilder would be too busy to defend against his mandatory challenger Breazeale because the negotiations that he was taking part in with Fury for a rematch. Now that Fury is no longer planning on fighting Wilder, Breazeale is free to fight him for his mandatory title shot. As such, it’s going to be up to the WBC to decide whether the Wilder vs. Breazeale fight will be a mandatory or a voluntary defense for Deontay’s WBC title.

If it’s a voluntary defense, then Wilder may need to fight Breazeale in his next fight. That’s what Hearn is pushing for with the WBC. From the way Hearn is talking, he doesn’t seem particularly interested in putting together the unification fight between Wilder and IBF/WBA/WBO champion Anthony Joshua. Hearn seems more interested in making the Wilder vs. Whyte fight. If Hearn can lean on the WBC hard enough, he may get his wish with them making the Wilder vs. Breazeale fight a voluntary defense, and then ordering the winner of that fight to face Whyte. It’s doubtful Wilder will bother fighting Breazeale if it’s only a voluntary defense.

Although Top Rank CEO Bob Arum and Fury have both said the Wilder fight will be taking place later this, it’s unclear whether that’ll be the case. Wilder isn’t going to wait around, hoping to make a fight that now be undo-able, given the major hoops that he would need to jump through to fight. At this point it’s unknown how serious the interest interest Top Rank has in making the Wilder-Fury fight. They can make good money putting Fury in with soft opposition to sell his fights on ESPN.

Top Rank and Matchroom Boxing both made offers to Deontay to try and sign him to their promotional companies, but he rejected them, according to RingTV. It’s possible that he’s looking for a sweetened offer from them. Unless one of those promotional companies are able to come up with an offer that Wilder wants to accept, his next fight will be televised on SHOWTIME World Championship Boxing, be it against Breazeale or whoever.

“I don’t care about Dominic Breazeale at all, I don’t feel he bring anything to the table but another body I can lay out on the canvas; another knockout for the highlight reel; another viral video for the internet,” Wilder said to RingTV.com. “That’s all he is to me.”

Wilder may not like having to defend his WBC title against a fighter like Breazeale, but he may have no choice. Wilder has to make a mandatory defense of his WBC title. If it’s not Breazeale, then it’ll be Whyte, depending on whether the WBC gives Hearn what he wants in deciding that the Wilder-Breazeale fight is a voluntary defense and not a mandatory. Breazeale has been Wilder’s WBC mandatory since 2017. If Breazeale has to fight Whyte for the interim WBC title, which in effect makes it a second title eliminator that Dominic is having to take part in to get his title shot, it means Wilder’s May 18 fight will be a voluntary defense. If that happens, then Wilder probably face someone beatable from the bottom

Breazeale is excited about possibly getting a title shot against Wilder. He’s been waiting for a long time for his title shot, and now it looks like he’s poised to get the fight, provided that Matchroom promoter Hearn doesn’t throw a wrench in the work by having the WBC force the Whyte vs. Breazeale fight for their interim heavyweight title.