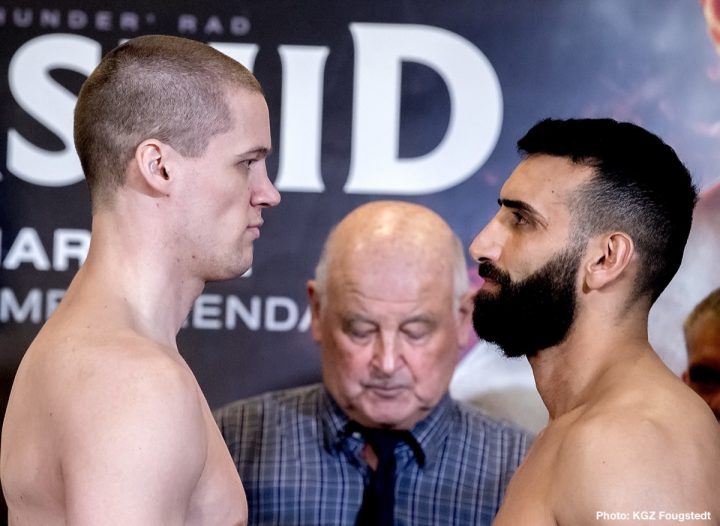 Kai Robin Havnaa (13-0, 11 KOs) and Rad Rashid (16-4, 13 KOs) both made weight today ahead of their IBO International Cruiserweight title fight tomorrow night at the SØR Amfi in Arendal, Norway. All the action will be shown live on Viasat 4 in Norway and live on SPORT1 in Germany.

Havnaa faces his toughest career test against Frankfurt’s ‘Thunder’ Rashid, and can become the first Norwegian boxer to claim an international title on home soil for over 40 years as he returns to his hometown arena following his stoppage win over Daniel Vencl at the SØR Amfi in February last year. 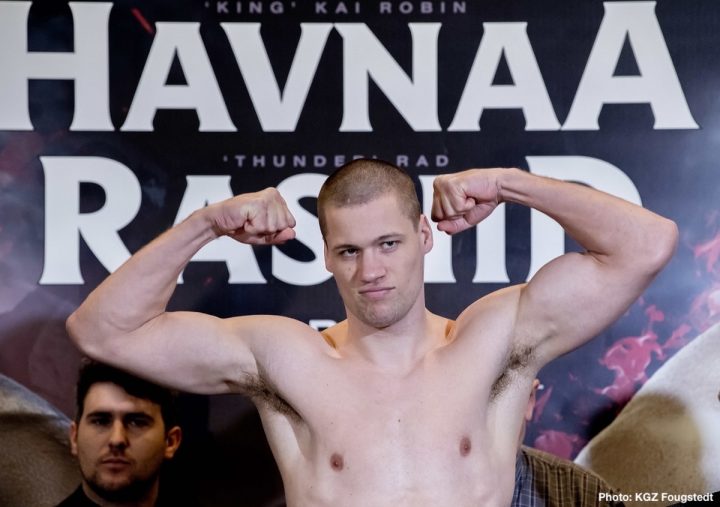 Thomas Hansvoll believes Kai Robin Havnaa (13-0, 11 KOs) is ready to step into the elite division by claiming his first professional title when he faces Rad Rashid (16-4, 13 KOs) for the IBO International belt on Saturday in Arendal.

“It’s an exciting fight,” says Hansvoll, the former World title challenger, who will be ringside commentating on all the action for Norwegian broadcaster Viasat 4.

“It’s a big step up for Kai Robin with his first title fight, and I’m really looking forward to it. This is Kai’s dream, to follow his father (former WBO World Champion Magne Havnaa), and finally step into the elite division.

“It’s not going to be easy because Rad Rashid means business. Kai will have to be well prepared and he will need to be careful, especially in the opening rounds, because Rashid will be starting with the big punches early.

“But I believe Kai is ready. He is being pushed a little bit now, and that’s good. If you speak to Kai he likes to take things slowly, but sometimes you just have to go for it. This is a good step up for him, and I think he’s more than ready.”

Havnaa will be without coach Joey Gamache for the first time in his career after he was injured in an unprovoked attack. Despite his absence, Hansvoll is sure Havnaa, and stand-in coach Erling, have the experience to get the job done.

“When I first heard, I was concerned,” he says. “But Kai has good experience now and will have his uncle Erling in the corner. They have been given the tools and have been following Joey’s plan, so I don’t think it will affect him. I hope Joey is back soon, but with Erling, I don’t think it’s going to be a problem.”

The Cologne-boxer is back in action following a convincing victory over domestic rival Denis Krieger at the Schwalbe Arena in Gummersbach on December 1, and can now take the next steps towards a World title challenge as he meets 24 year-old Argentinian Eniz for the IBO Intercontinental strap.

“I would like to thank Team Sauerland for this opportunity,” he says. “My aim is to fight for a World title, and winning the IBO Intercontinental belt will bring my closer to this. I will not underestimate Eniz, but I’m confident I can win!”

“This is an exciting addition to what promises to be one of the biggest events in Norwegian boxing history,” said promoter Nisse Sauerland. “Fans in Arendal can now look forward to a second title fight. There will be lots of good options out there for Deniz if he wins, and the World title will not be far away.”

Kent Erik Badstad (3-1, 1 KOs) has been sparring Kai Robin Havnaa ahead of his IBO International Cruiserweight title fight against Rad Rashid on March 2 in Arendal, and says the Norwegian star is in “the best shape ever.”

Badstad will be boxing on the undercard of Havnaa’s hometown show at the SØR Amfi, and following his first-round knockout victory over Gennadi Mentsikainen on February 2 in Vantaa, Finland, the 31 year-old from Trondheim takes on Hungary’s Istvan Orsos (16-48-3, 5 KOs).

“It was great sparring with Kai,” said Badstad. “I had a great time in Arendal with him and his uncle Erling. We had many good, tough rounds together that I think we can both be happy with going into our fights next Saturday.

“From my point of view, Kai is in the best shape ever. I’ve never seen him looking so good. He was really sharp in sparring and I know he’s going to be really fit and ready to win the IBO title against Rad Rashid.

“My last fight against Gennadi Mentsikainen was a very important victory for me. It has given me a lot of confidence and a good feeling for my next fight, although I was hoping it would last a little longer.

“I’m really looking forward to boxing in in Arendal, and thankful to Team Sauerland for giving me the opportunity. I want to put on a good show for the fans, and do my part to contribute to a great event.”

Walsall boxer Rachel Ball is in confident mood as she heads to Norway this weekend writes Ben Gibson.

Ball (4-0) steps up to lightweight and puts her unbeaten record on the line against former European and WBC International Champion Katharina Thanderz (10-0, 2 KOs) on March 2 in Arendal.

“My last training session was on Wednesday night and it was just a light session as I rest for Saturday,” she told bcb-promotions.com. “I always train hard and most days I train twice per day.

“We have done more sparring and more strength work in order to prepare for stepping up in weight and it has worked.

“I am still strong at this weight and I can hold my own against welterweights.

“I have increased my strength work for this fight.

“We don’t want to fight lightweight all the time but this was too good of an opportunity to turn down.

“I am confident even with the step up in weight.”

Ball, a former three-time world kickboxing champion is promising another ‘war’ as she travels the North Sea to take on the undefeated Thanderz. Travelling abroad is not a new experience for the 27 year-old and it is one she is relishing.

“I have fought abroad before I turned pro and I have always won,” she added. “I know that the odds are not in my favour as the away fighter but I always perform in the ring and I am prepared to give everything to make sure I get the win.

“It definitely comes with added pressure and it is my biggest fight to date regardless of it being home and away.

“Being away from home I need to give the judges no reason to give to rounds to Thanderz because she’s the home fighter.

“Fighting away can be less stressful as you don’t need to worry about ticket sales or getting tickets to people.

“It has been nice to just focus on my training and diet and diet for this camp.

“I will miss my rowdy crowd as I have a lot of love for the people who support me.

“The girls who I train and came out with me last time are always in my heart and while they aren’t joining me we are a family and they will be watching online if they can.”

“If I give it my all and listen to my corner, then everything will be fine.” 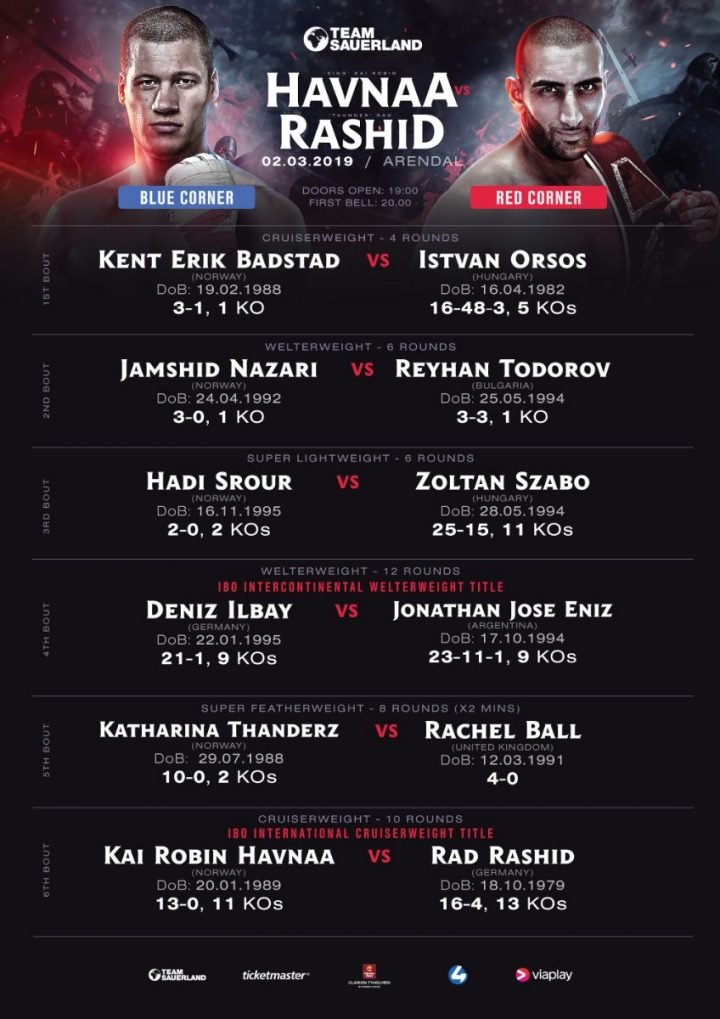