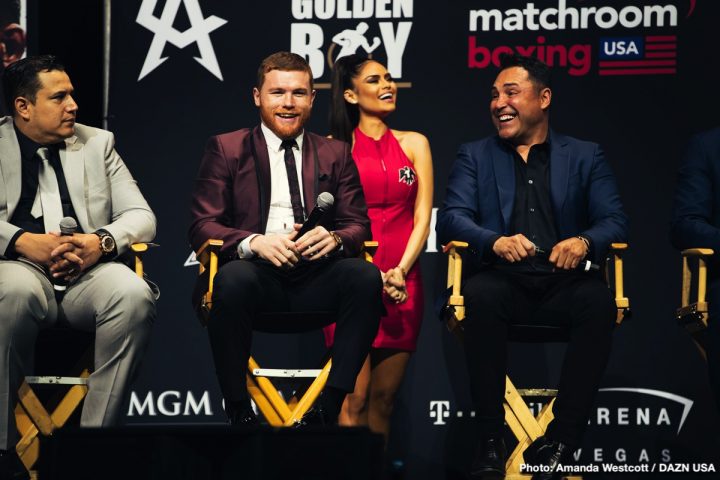 By Allan Fox: A rematch between Saul Canelo Alvarez and Floyd Mayweather Jr. could be a $1.5 billion fight, according to Golden Boy Promotions CEO Oscar De La Hoya. Canelo wants the rematch to avenge his loss to Mayweather. Obviously the huge money the fight would pull in certainly helps.

If Mayweather agrees to the rematch with Canelo, it’s possible he won’t want it to count against his record by making it an exhibition match so he can stay unbeaten even if he loses. Large size gloves might be something Mayweather would ask for, as well as the fight being a 10 rounder instead of a 12 round fight.

“If Floyd Mayweather decides to come back, a fight with him and Canelo could be a $1.5 billion fight,” De La Hoya said to TMZ Sports.

The odds of Mayweather coming back to fight Canelo are pretty low. The perception is that Mayweather (50-0, 27 KOs) would do anything to keep from getting beaten. Mayweather’s unbeaten record is very important to him, even though he’s arguably been beaten twice during his career in his first fight against Jose Luis Castillo and Marcos Maidana. Those were considered robberies in the eyes of a lot of boxing fans, where Mayweather, the more popular fighter, was given wins over those two. Mayweather looked shot in his last two fights against MMA fighters Conor McGregor and tenshin Nasukawa.

“I would love to have the opportunity to avenge that defeat,” Canelo said to TMZ Sports about wanting a rematch with Mayweather.

A rematch with the shot to pieces Mayweather probably isn’t going to happen, but Canelo always gives rematches to the three fighters [Gennady Golovkin, Erislandy Lara and Austin Trout] that appeared to beat him in the past but weren’t given wins.

Mayweather supposedly made $300 million for his fights with Conor McGregor and Manny Pacquiao. With the way increased amount of money that boxing events pay nowadays, it’s possible that a Canelo vs. Mayweather rematch would make huge money. $1.5 billion is hard to believe, because has stopped fighting in boxing matches against fighters from that spot. Mayweather is now hustling to put together fights against MMA fighters in boxing events. They’re horrible mismatches, but fans are still paying to see them.

It’s very unlikely that the 42-year-old Mayweather will return to the ring to fight Canelo at middleweight, which is clearly the only weight class the fight could get made. Canelo is huge now, and he wouldn’t be able to drain down to 154 or 152 pounds, which is the weight they fought at in 2013. Mayweather

If he did agree to making a rematch with Canelo, Mayweather would likely want a huge advantage in the purse split like the previous time they fought each other. That’s going to be hard him to do now that Canelo has become boxing’s biggest money maker. Canelo just inked a big $365 million deal with DAZN, and he would want to be well paid for a second fight with Floyd.

Since Mayweather is completely over-the-hill at this point in his boxing career, and only interested in arranging fights against kick boxers in exhibitions, De La Hoya should setup a rematch Canelo and Erislandy Lara, as he was clearly on the receiving end of a controversial decision to Canelo in July 2014. That was a pretty blatant robbery, as was the first Canelo vs. Gennady Golovkin fight. Canelo only landed 31 head shots in the entire fight against Lara.

Canelo will be fighting IBF middleweight champion Danny Jacobs (35-2, 29 KOs) on May 4 on DAZN at the T-Mobile Arena in Las Vegas Nevada.

If Mayweather were to agree to a rematch with Canelo, one can only imagine all the things he might put in the contract for the fight. A catch-weight would be a given, somewhere from 152 to 156 lbs. A rehydration would also likely be in the contract to limit the amount of weight Canelo could put back on after weighing in.