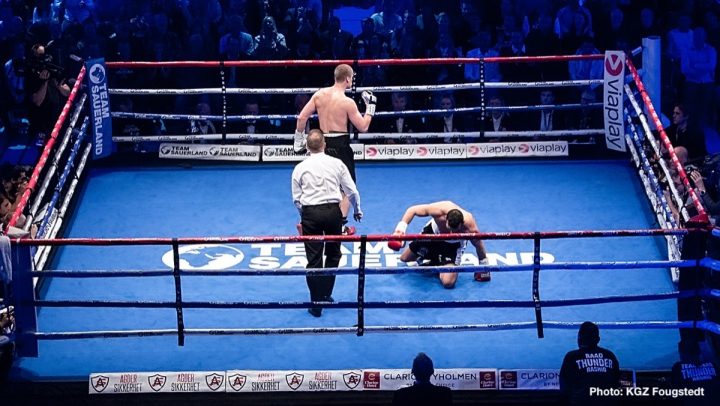 In front of a capacity crowd at his hometown arena, the undefeated Norwegian star recorded his fourteenth professional win and took home his first major title with two crunching body shots sending Germany’s Rashid to the canvas.

Havnaa, the son of former WBO World Champion Magne Havnaa, becomes the first Norwegian boxer to win an international title on home soil for over forty years, and continues his quest to follow in his father’s footsteps.

“It’s a dream to win my first title, which I will place next to my father’s belt,” said Havnaa. “I know it is not as big a title as his, but it’s a good step for my career, and one day, I hope to win my father’s old belt and become World Champion.

“It was amazing to fight in front of my home fans in Arendal again. I would like to thank everybody who came to support me and I would also like to thank my promoter Nisse Sauerland for making all this possible.

“Rashid was a tough boxer and I knew I had to be at my best to beat him. We trained hard and I had a good game plan. I’m very happy with how the fight went. It was absolutely crazy to win my first title at home in Arendal!”

Promoter Nisse Sauerland said: “That was a great night for Kai. The only way is up for him now. The crowd was amazing, which shows he is becoming a real star in Norway. There’s going to be a lot of exciting options for him to explore.”

Former European and WBC International Champion Katharina Thanderz earned a majority decision win over Rachel Ball on the undercard despite breaking her right hand in the fourth round of their eight-round contest.

The Oslo boxer, who lives and trains in Spain, has already established herself as one of the top prospects in the female 130lbs division having captured European honours with a unanimous points win over Maria Semertzoglou in October 2017.

She has since claimed victories over Valgerdur Gudstensdottir, for the WBC International Lightweight belt, Bojana Libiszewska, Tamara Marianela Nunez and Rachel Ball to bring her to the cusp of a World title challenge.

Having committed her future to Team Sauerland, Thanderz believes she now has the right team around her to realise her ambition of becoming World Champion.

“I feel privileged to have the opportunity to work with Europe’s leading boxing promoter,” she said. “I’m sure with their experience and network, combined with hard work from my team and myself, we can achieve many great things.

“There are several reasons why I chose to sign with Team Sauerland. First is my desire to box in Norway, where I am from, as even though I live and train in Spain, nothing makes me happier than performing in my home country.

“Secondly, I like the fact that Sauerland has ample experience with female boxing. I’ve seen how they’ve worked with other female boxers and how they’ve lifted their careers. It’s good to see a promoter that’s willing to include female boxers at the same level as male fighters, and I can see they take pride in it.

“One thing is for sure, with Team Sauerland at my back, the great team I have in Spain that work every day to make me a better boxer, and my daily hard work, stubbornness and commitment, I will become World Champion!”

Echoing these sentiments is Thanderz’s new promoter Nisse Sauerland, who believes his latest signing can become a future star of female boxing.

“We’re delighted to welcome Katharina to the team,” says Sauerland. “She is an exceptional talent in a very exciting division and it will not be long before she is challenging for big titles. Katharina is the future of female boxing in Norway, and with our guidance, she can become a global super star.”

Christian Ramberg, Programme Manager Sport for Nent Group, who will broadcast Thanderz’s fights in Norway, said: “Katharina has already proven herself and accomplished a lot in her professional career. We can’t wait to follow every step on her journey to become a World Champion. She has the potential to go all the way. Katharina is also special outside the ring. I can’t think of a better role model for the sport of boxing.”