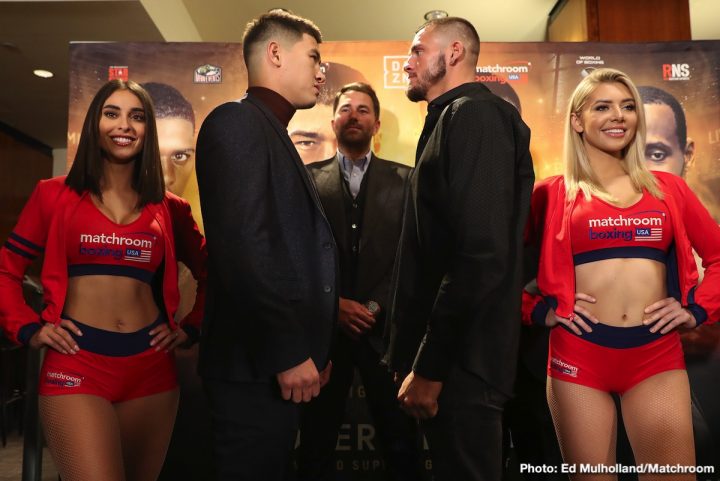 Moscow, Russia (February 6, 2019) World of Boxing, one of the premier international boxing promoters and based in Moscow, Russia is marching into the United States on Saturday, March 9, 2019 with two of its top charges, WBA Light Heavyweight World Champion Dmitry Bivol, (15-0, 11 KOs), and Undefeated Heavyweight Contender Sergey Kuzmin, (14-0, 11 KOs), featured in bouts from the Turning Stone Casino in Verona, N.Y. and broadcast on the streaming service DAZN.

Bivol’s world title defense against Joe Smith Jr., (24-2, 20 KOs), will headline the show in a scheduled 12-round clash while Kuzmin will face an opponent to be announced in a ten-round bout. The event is co-promoted with Eddie Hearn and Matchroom Boxing

On September 22, 2018, World of Boxing co-promoted with Matchroom Boxing the World Heavyweight Championship between Anthony Joshua and Povetkin which drew 80,000 boxing fans to Wembley Stadium in London, England and was viewed by a massive international televised audience.

Said Ryabinsky, “I’m very happy with the great athletes and tremendous events we’ve been able to promote since 2012. We now enter a new chapter where many of our fighters will be further competing in the United States and we welcome this challenge to fight the best boxers situated in that country.”

The philanthropic Ryabinsky also played an extensive financial role in the recovery of Russian heavyweight contender Magomed Abdusalamov who suffered a brain injury following a fight in November 2013, underwriting many of the costs associated with his therapy and family assistance.

“I considered it my personal duty to help Magomed although I didn’t promote him. He was a true Russian warrior and I was honored to help him and his family and will continue to do so as needed.”

One of World of Boxing’s top prospects, 2016 Olympic Bronze Medalist Murodjon Akhmadaliev impressed an HBO nationally televised audience improving to 5-0 with a ninth-round knockout of Isaac Zarate in their scheduled ten-round super bantamweight bout on November 24, 2018.