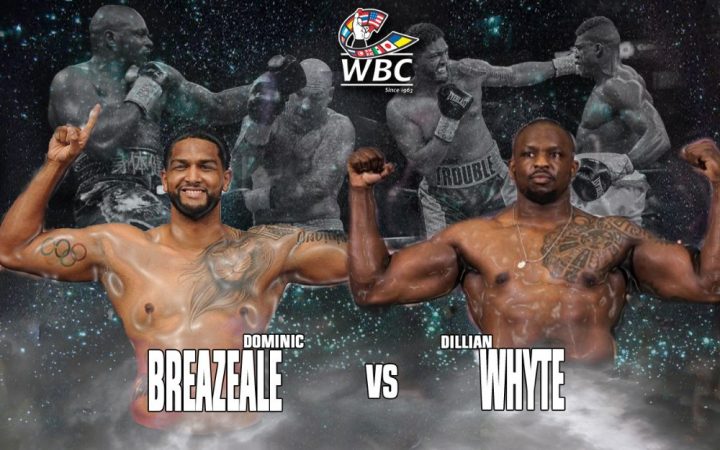 By Scott Gilfoid: Dillian Whyte says he’s not going to be intimidated by American Dominic ‘Trouble’ Breazeale if he chooses to get in his face in the build up to their fight for the WBC heavyweight interim title in the coming months. Whyte (25-1, 18 KOs) says he won’t be intimidated by the once beaten 6’7″ Breazeale (20-1, 18 KOs) before the two of them mix it up.

Breazeale likes to get in the face of his opponents before their fights to let them know that they’ve got trouble ahead. It seems like Whyte already bothered at the prospects of having Breazeale in his face at the news conferences.

Whyte vs. Breazeale is technically been ordered for them to fight for the WBC’s interim heavyweight, but the fight is essentially a title eliminator when you look at the big scheme of things. The winner of the Whyte-Breazeale fight will be not only the WBC interim strap holder, but also the mandatory challenger for the winner of the Deontay Wilder vs. Tyson Fury rematch. It’s considered a clever move by the WBC to order the fight, because it’ll keep Whyte’s promoters at Matchroom Boxing happy for the time being. As long as Whyte wins, they’ll be happy. But if Whyte loses, then obviously they’ll be kicking themselves for letting him take a needless risky fight when he would eventually get a shot at Matchroom fighter Anthony Joshua just by sitting tight and waiting. This is a fight that Whyte could lose. He struggled against journeyman Dereck Chisora in his two fights with him, and his fight with Joseph Parker was one that could have gone the other way if the referee hadn’t blown a call in the 2nd round in scoring a knockdown of Parker from a head-butt by Whyte.

The World Boxing Council ordered the Whyte vs. Breazeale fight to give both of them a good fight to take while WBC heavyweight champion Deontay Wilder and Tyson Fury are tied up for their rematch, which is expected to take place in May. However, it’s believed that the complaining by Whyte and his Matchroom Boxing promoter Eddie Hearn about Breazeale being the mandatory is what led to the WBC ordering the Whyte-Breazeale fight. Even though Breazeale earned the WBC mandatory position two years ago in stopping former two time world title challenger Eric Molina in the eighth round in November 2017, the WBC chose to rank Whyte above him in their rankings for some odd reason. The WBC could have made things easier by placing Breazeale at #1, as sanctioning bodies often do when a fighter earns the mandatory spot, but the WBC did things differently in ranking the Hearn promoted Whyte ABOVE Breazeale. You can only wonder why. Further, the WBC could have ordered WBC champion Deontay Wilder to defend his title against Breazeale in the last 15 months, but they haven’t.

“I don’t think he can intimidate me whatsoever by trouble is coming,” Whyte said to skysports.com.“The good thing is, he’s the mandatory…Obviously in Britain would be good [for the location of the Breazeale fight]…I want to be world heavyweight champion,” Whyte said.

It’s silly for Whyte to be making a fuss over Breazeale’s intimidation tactics. It’s part of the game of boxing for fighters to use intimidation. If it bothers Whyte so much, then he chose to look away when Breazeale is in his presence. Whyte doesn’t have to look at Breazeale in the eyes when the two of them are face to face. Complaining about it right now this far ahead of the actual fight is silly. Whyte’s promoter Eddie Hearn isn’t going to be able to do anything about Breazeale’s intimidation tactics. Unless wants a fence to keep Breazeale from getting near him during the face offs, he’s just going to have to put up with it, right?

The purse bid for the Whyte-Breazeale fight is scheduled for March 19. There’s a chance this fight could go to a purse bid if the management teams are unable to put a deal together. Whyte would like the fight to take place in the UK, and Breazeale likely prefers that it take place in the U.S If you’re Breazeale, it’s perhaps very important that the fight take place in the U.S, given the way Whyte’s two fights against Dereck Chisora and his match against Joseph Parker turned out. Those were fights that Whyte could have lost with different judging and referees. Whyte could have EASILY lost all three of those fights. If Breazeale can get Whyte over to the U.S, then that’s one big thing he won’t have to worry about. With the fight in the U.S, it could make it a 50-50 affair. With it taking place in Whyte’s backyard, you can’t really say how it’ll end. All you can do is look at Whyte’s two fights with Chisora and his bout against Parker to extrapolate from there how the judges and referee will potentially perform in the Whyte-Breazeale fight.

Breazeale is coming into the fight with Whyte having recently knocked out Carlos Negron in the ninth round last December in an impressive performance from the 2012 U.S Olympian. Breazeale’s two fights before that were stoppage wins over Eric Molina and Izuagbe Ugonoh(18-1, 15 KOs). Breazeale’s exciting fifth round TKO win over Ugonoh in February 2017 was one of the best fights of the year. Both guys hit the deck in that fight. Breazeale was dropped hard in the fourth. He was able to get back up, and barely escape the round. In the fifth, Breazeale knocked the hard hitting Ugonoh down twice to get the stoppage. Earlier in the fight, Breazeale dropped Ugonoh in round 3. The 6’5″ Ugonoh is one of the hardest punchers in the heavyweight division today. He’s clearly a much bigger puncher than Whyte. Ugonoh would give Whyte major headaches if he fought him. The way that Breazeale toughed it out against Ugonoh showed a lot of heart. A lot of fighters would have been done after they were dropped in the fourth round the way Breazeale was. He was close to being knocked out in that fight. It was only because of Breazeale’s tremendous will to win that he was able to climb off the deck, and come back in the fifth round to knock Ugonoh down twice to get the knockout victory.

Breazeale lost to Anthony Joshua by a seventh round knockout in June 2016. Breazeale couldn’t get to Joshua to land his shots due to the strong jab he kept getting hit with. It would have been interesting if Breazeale could have landed anything in the fight, but Joshua did an admirable job of keeping Dominic on the outside the entire fight.