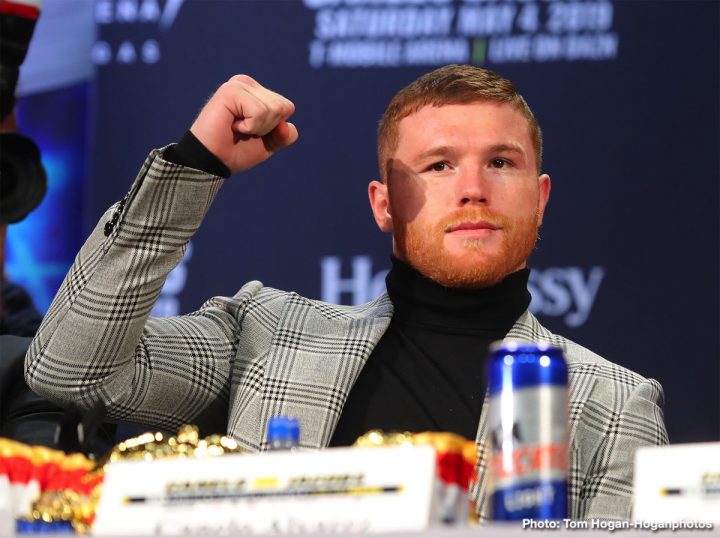 By Jim Dower: Tickets for the May 4 unification fight between WBA/WBC middleweight champion Saul Canelo Alvarez and IBF champ Danny ‘Miracle Man’ Jacobs (35-2, 29 KOs) will officially go on sale today on Wednesday, the 27th of February for their highly anticipated bout on DAZN and Sky Box Office at the T-Mobile Arena in Las Vegas, Nevada.

A win for Canelo over Jacobs, 32, is expected to lead to a third fight against Gennady ‘GGG’ Golovkin this September on DAZN. Golovkin is said to close to signing with DAZN, and that will put him in position to get a lucrative trilogy fight against Canelo this September on the Mexican Independence holiday. That’s going to be another great fight between the two talented middleweights.

This will be Canelo’s first real test since negotiating a huge 5-year, 10-fight, $365 million deal with DAZN. Canelo’s first that was shown on DAZN last December was against WBA World super middleweight champion Rocky Fielding, but that turned out to be a less than competitive match-up. Canelo (51-1-2, 35 KOs) knocked Fielding (27-2, 15 KOs) down four times in knocking him out in the third round in front of an energized audience on December 15 at Madison Square Garden in New York.

Golden Boy Promotions intentionally picked out Fielding as Canelo’s opponent for him to win a third division world title strap, and at the same time get his second fight in 2018. Canelo had missed being able to fight last May on the Cinco de Mayo holiday weekend due to him being suspended by the Nevada State Athletic Commission after testing positive for the banned performance enhancing substance clenbuterol.

The tickets for the Canelo vs. Jacobs fight is expected to sellout quickly, so it would be a good idea for boxing fans to purchase their tickets as soon as possible if they want to guarantee their best chance of getting them before they’e scooped up. Longtime fans of the sport realize this fight has the potential of being a memorable one, as long as Jacobs comes to fight and doesn’t use a lot of moment. Jacobs is someone that has two sides to his game. He can come out with both barrels blazing to KO his opponents quickly like he did against Peter Quillin in 2015, and in his first fight against Sergio Mora in 2015. Jacobs can then turn around and fight timidly by running from his opponents and wind up losing like we saw in his losses to Dmitry Pirog and Gennady Golovkin. As long as Jacobs comes to fight, we’re going to see an exciting match from start to finish, but if he decides he wants to get on his bike, it’s going to be an ugly affair that will likely lead to him losing a decision. Jacobs ran the first six rounds against GGG in their fight in 2017. Although Jacobs made a hard push to try and rally in the second part of the bout, he didn’t do enough to impress the judges, who gave Golovkin the win. Instead of taking ownership in accepting that he was to blame for not doing enough to get the victory by fighting hard in the first part of the fight, Jacobs complained that he felt he should have been given the win. Hopefully, we don’t see a repeat from Jacobs in his fight against Canelo Alvarez on May 4. It’ll be a bad look for Jacobs for him not to admit that he wasn’t good enough.