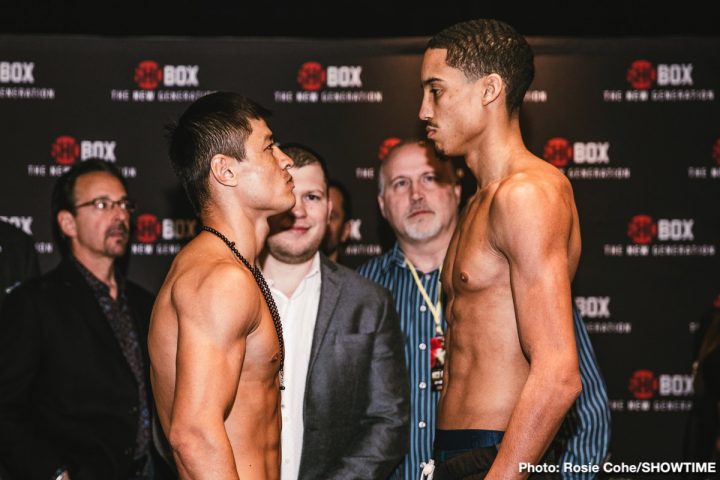 Here is what the fighters had to say on Thursday from the Kansas Star Casino.

*–Fight contracted at a catchweight of 142 pounds. 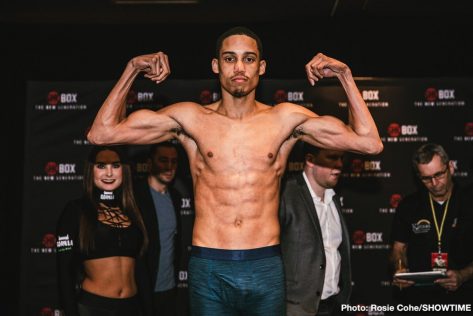 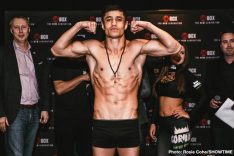 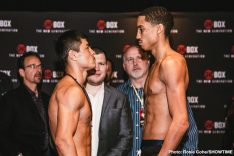 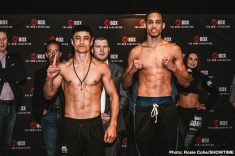 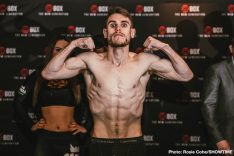 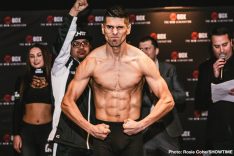 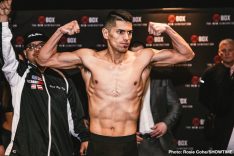 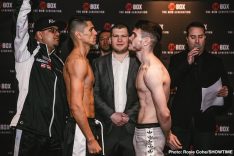 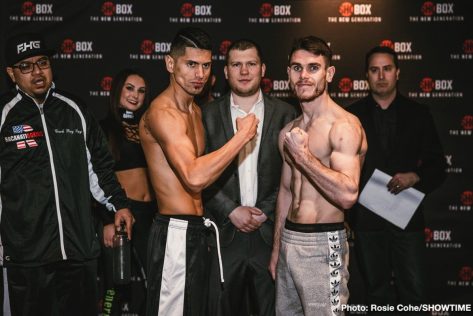 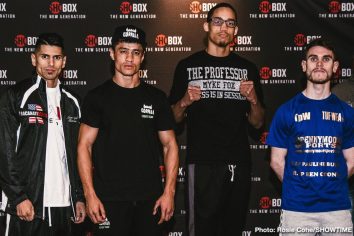 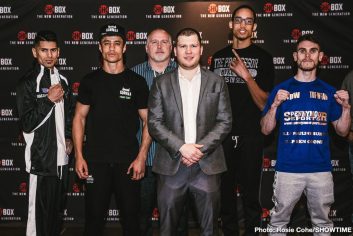 “I know the odds are against me because of his height. He says he’s 6-foot-4 and the tallest fighter I’ve fought was 6-foot-1.

“I just have to be the smarter fighter tomorrow. My limited English skills has never hurt me in the ring and communicating with my corner. Fighting is a universal language. My English is a little bit better; it’s getting better.

“I trained for this fight both in Detroit and some in Florida and sparred with bigger guys like Anthony Dirrell and Leon Lawson at the Big Time Boxing Gym in Boca Raton. I had my conditioning coach B.B. Hudson in Florida with me too. So we are more than ready to go come fight night.

“I’m not eyeing one particular fighter; I just want to fight for a title. It’s been a year since my ShoBox debut against Sonny Fredrickson and I’ve improved a lot. I can’t wait to show my skills tomorrow night.

“I have some surprises that I’ll show on my way into the ring. I like to make it fun, and the fans will see that when I enter the ring.”

“This is the best shape I’ve ever been in. We’ve been trying to put this fight on for a long time. We tried to do it last year, but it didn’t work out. I decided to fight someone the caliber of Ergashev because he’s undefeated, and I’m undefeated. We have similar records, so why not?

“I’ve been watching [Ergashev] fights every day on YouTube. There is some danger in that, but I feel like I the more I can study what he does in the ring, the better prepared I will be.

“I don’t know what comes next for me. I’m still young. I’m just focused on tomorrow night.

“Right now, my brother [ShoBox alumnus Alantez Fox] thinks I’m the better fighter than him, but that’s only because I’m fighting tomorrow. I bet after the fight he will go back to thinking there’s no one better than him.”

“Eventually, I’ll be a featherweight, but I think I can make this weight [122 pounds] for another year, year and a half.

“I’ve studied him on YouTube. I know what to do tomorrow night. I know how to exploit my advantage. He has a No. 4 ranking by the WBO so if we get the win we can get his rating, if not better.

“He’s never seen a fighter like me; never fought in the States, or against a Mexican fighter. So I know I have the advantage. I have the ring IQ, and am the smarter fighter.

“I have 10 rounds as my mindset. Last time I was on ShoBox I wanted to get my opponent out of there. But not this time. Of course, if I hurt him in the first round I will try to get him out of there. But it’s OK to win by decision too.”

“I was offered this fight and it’s a nice opportunity for me. It’s live on SHOWTIME, so why not? This is a great stage and it’s a very winnable fight for me.

“Eventually we will get a world title shot. I just have to keep winning. I know I have the ability and the time is now. If the opportunity is right, we will take whatever is put in front of us.

“He’s supposed to be an aggressive fighter and I’m a boxer so it will be a good mix of styles. I know that he’s a good, strong fighter, but I’ll be ready to handle whatever he gives me.

“Of all the rounds I’ve boxed in 25 victories, I’ve only lost four or five rounds. If you’re not getting hit, you’re not losing.

“I’m a family man and don’t go out. I’ve just been focused 100 percent on my boxing career.

“I’ve been in the States since February 6. We stopped in New York on our way here and trained for a few days. I trained at Mendez Boxing in Manhattan and also trained at Gleason’s Gym in Brooklyn.”

Friday night’s ShoBox: The New Generation telecast will also be shown live in the UK and Ireland on the BoxNation boxing channel (3 am UK time).

Emanating from the Kansas Star Casino in Mulvane, Kansas, the event will feature a 10-round super lightweight showdown between undefeated prospects Shoh Ergashev (15-0, 14 KOs) of Uzbekistan and Maryland’s Mykal Fox (19-0, 5 KOs) and a 10-round super bantamweight battle for the WBA-NABA Championship between Fort Worth’s rugged Jesse Angel Hernandez (12-1, 7 KOs) and Britain’s Thomas Patrick Ward (25-0, 4 KOs).

BoxNation – The Channel of Champions – is a 24-hour dedicated boxing subscription television channel, available in the United Kingdom and Ireland on TalkTalk Plus TV: Channel 415, Sky: Channel 427, Virgin Media: Channel 546 and BT: Channel 415. For more information on BoxNation, visit their website HERE.

Event promoter Dmitriy Salita of Salita Promotions says the addition of BoxNation is a welcome bonus for his fighters on the card, Ergashev and Hernandez.

“BoxNation picking up the event will allow Shoh and Jesse to also display their talents to European fight fans and increase their worldwide profiles. They are both in against top-level opponents who will seriously test them. I’m happy BoxNation decided to pick up this terrific event. It’s a great opportunity for all the fighters on the telecast to become bigger stars around the world.”