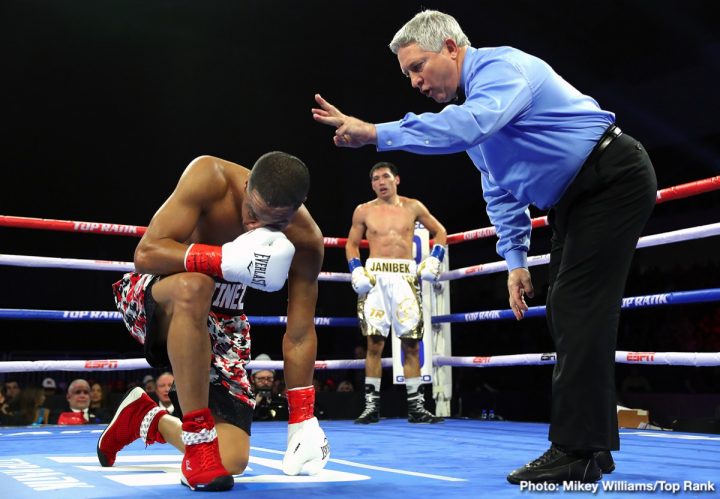 Martinez’s corner threw in the towel in the 5th round after he was hit with several hard shots from Alimkhanuly. The official time of the stoppage was at 0:21 of round five.

The 25-year-old southpaw Alimkhanuly, who comes from Kazakhstan, dominated Martinez from start to finish in hitting him with hard left hands to the head and powerful body shots.

In the 2nd round, Alimkhanuly was nailing Martinez at will with lefts to the head and sweeping right hooks.

Alimkhanuly’s devastating body punching was in full effect in the third round when he dropped the 28-year-old Martinez. The difference between the power on Alimkhanuly’s shots when he was throwing to the body and head was quite noticeable. Alimkhanuly doesn’t possess nearly the same power on his his head shots as he does when he throws to the body. The shot that Alimkhanuly knocked Martinez down with in the third would have stopped a lot of fighters.

In the 4th, Alimkhanuly landed some big punches to the head of Martinez. The fight wasn’t remotedly close at this point. Martinez was getting hit with everything that Alimkhanuly. At the round ended, it was clear that fight wasn’t going to last much longer.

Alimkhanuly continued to blast away at Martinez in the fifth round, which resulted in the New York fighter’s corner throwing in the towel to have the fight stopped.

Overall, it was a good win for Alimkhanuly, who looks destined to be a world champion at some point in the future. Alimkhanuly already looks good enough to beat IBF super middleweight champion Caleb Plant, and WBO champion Gilberto ‘Zurdo’ Ramirez. WBA Super World and WBA ‘regular champions Callum Smith and Saul Canelo Alvarez would be a lot tougher for Alimkhanuly to deal with. He would need to come up with more fire power to beat those kinds of guys. Alimkhanuly is a really good body puncher, but he needs to develop his punching power to the head for him to have a chance of beating the likes of Canelo Alvarez and Callum Smith. 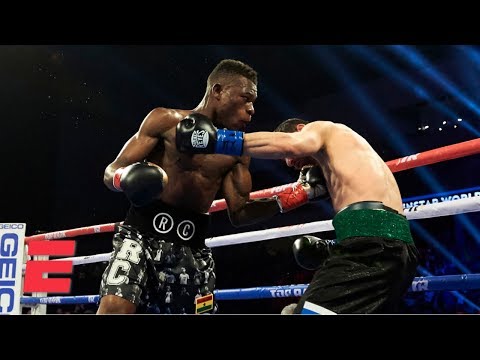 Richard Commey (28-2, 25 KOs) made easy work of little known #3 IBF Isa Chaniev (13-1, 6 KOs) to score a 2nd round stoppage to capture the vacant International Boxing Federation lightweight title on Saturday night at The Ford Center at The Star, Frisco, Texas.

Commey dropped Chaniev in the 1st and twice in the second round. The fight was halted by referee Lawrence Cole after the second knockdown. The official time of the stoppage was at 0:39 of round 2.

Chaniev looked like he didn’t belong inside the ring with Commey tonight. This was a bad mismatch from the word go. It’s the promoters of the event’s fault. It’s the IBF that made the decision to give Chaniev a high ranking without him having proven himself by beating talented fighters.

With the victory, Commey, 31, will face WBA/WBO lightweight champion Vasyl Lomachenko (12-1, 9 KOs) in a unification fight on April 13. That fight figures to be a mismatch in favor of Lomachenko.