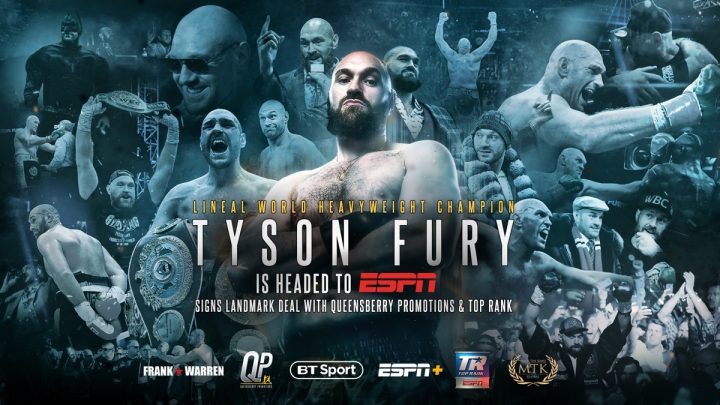 The most talked about boxer of the year will play a central role across Top Rank on ESPN’s multiplatform lineup in the US with multi-year agreement.

Since joining the vast pool of talent at MTK Global in 2017, Tyson Fury has re-earned his place in the spotlight and in the hearts of the public with his dynamic skills in the year and honest openness to life.

In just three fights with Frank Warren and the team at Queensberry Promotions, Fury’s popularity has extended to audiences far beyond home soil attracting the attention of Top Rank’s CEO and Hall of Fame promoter Bob Arum.

MTK Global have always been proud to represent Tyson as he soars to new heights and welcome the move which can only bring boxing as a whole to new levels.

MTK Global CEO Sandra Vaughan was instrumental in negotiations and bringing both parties to the table, and said: “MTK Global are thrilled to have played a role in what can only be described as a monumental partnership, no doubt the biggest one in the boxing industry, and we’re looking forward to working more closely with the teams at Top Rank and ESPN well into the future.”

– Deal further cements ESPN as the place to see Queensberry Promotions events in the US.

The deal will see Tyson Fury backed by two broadcast powerhouses in ESPN and BT Sport. Frank Warren will be working alongside Bob Arum to cement Fury’s place as one of boxing’s biggest global stars.

The deal will see Tyson Fury feature regularly in the US, live on BT Sport in the UK and ESPN in the US.

By partnering up with ESPN and Top Rank in America, we’re giving Tyson the opportunity to perform on the biggest and most powerful platforms on both sides of the Atlantic and become a truly global star.”

“He is a generational heavyweight talent at the peak of his powers. We also look forward to our increasing relationship with MTK Global, which represents so many world-class fighters,” Arum said.

An announcement on Tyson Fury’s next fight will be made in due course.