Marcus Browne vs. Jean Pascal in the works for the spring 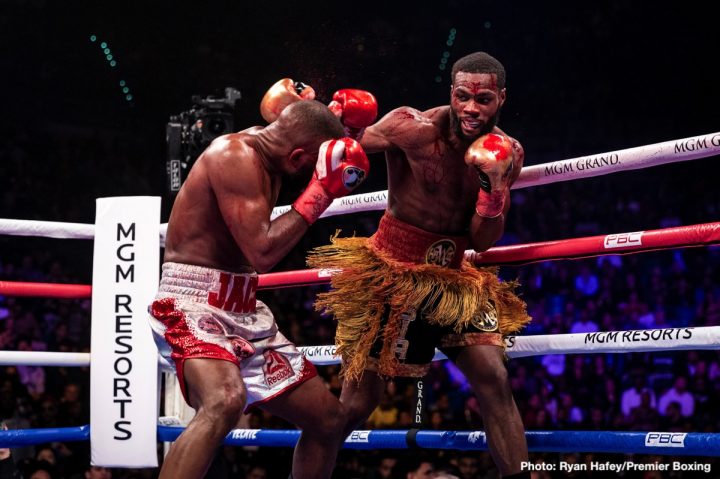 By Eric Thomas: A fight between WBA interim light heavyweight champion Marcus Browne (23-0, 16 KOs) and former WBO 175 lb champion Jean Pascal (33-6-1, 20 KOs) is being planned for the spring, according to Mike Coppinger.

It’s not the title shot that the 2012 U.S Olympian Browne wants, but it’s still a good fight. Browne wants to fight for a belt at 175, but he’s waiting for one of the champions to give him the opportunity.

Browne, 28, looked great last month in beating former two-division world champion Badou Jack by an impressive 12 round unanimous decision on January 19 in Las Vegas, Nevada. Browne won the fight by the scores 117-110, 116-111 and 119-108. Some boxing fans felt that Browne’s win was helped by the large cut that the 35-year-old Jack suffered to the forehead in the later rounds. Browne dominated the fight all the way through. The cut didn’t factor into ultimate victory for him. Browne captured not only the WBA interim light heavyweight belt, but also the World Boxing Council Silver 175 lb title. Having those two belts gives Browne the luxury of picking which champion he wants to go after. He can challenge WBA champion Dmitry Bivol, or WBC champion Oleksander Gvozdyk. Whichever one works for him.

“Marcus Browne is set to fight Jean Pascal in the spring, according to industry sources. Browne is coming off a career-best victory, a win over Badou Jack last month. Pascal, a former champion, lost to Dmitry Bivol in November,” Mike Coppinger said on his Twitter.

Some boxing fans believe Marcus Browne is the best fighter in the light heavyweight division today. He just needs to prove it by taking on the best.

This will be a good fight for Browne to keep busy while he waits for an eventual title shot against one of the champions. Pascal will give Browne some rounds, and he’ll enable to show where he’s at in his development. Sergey Kovalev stopped Pascal twice in 2015 and 2016. If Browne can knock him out too, it’ll show that he’s up there with Sergey with his offense.

In other boxing news, negotiations between IBF light heavyweight champion Artur Beterbiev (13-0, 13 KOs) and former world title challenger Sullivan Barrera (22-2, 14 KOs) have fizzled out, according to Coppinger. This would have been the 34-year-old Beterbiev’s first fight of his new contract with Top Rank Boxing. Unfortunately, the Beterbiev vs. Barrera negotiations fell apart over the money.

Beterbiev be back inside the ring in May against an opponent still to be determined on ESPN. With the Barrera fight not happening, then perhaps a unification fight between Beterbiev and WBO light heavyweight champion Sergey Kovalev might be in order. Beterbiev called out Kovalev recently in letting him know that he’s interested in facing him. With both champions with Top Rank Boxing, there’s nothing keeping them from fighting each other. Kovalev says he wants a unification fight. We’ll have to see if he’s serious or not.

Beterbiev defeated Callum Johnson by a 4th round knockout in his last fight last October in an exciting fight where both guys went down.

Barrera, 36, won his last fight in beating Sean Monaghan by a 10 round unanimous decision last November. Before, Barrera was knocked out in round 12 by Bivol in a failed title challenge in March of last year.