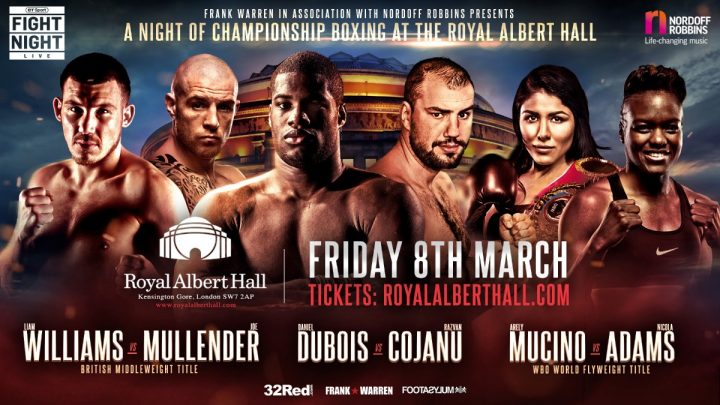 LIAM WILLIAMS has ripped into big fight rival Joe Mullender telling him: “You can’t punch and you’ve got no skills.”

Williams makes the first defence of his British Middleweight crown against the Essex man at London’s Royal Albert Hall on Friday March 8.

Mullender has earned a reputation as one of boxing’s tough men, but the Welshman who beat Mark Heffron in December to become British champion roared: “That’s not enough.

“He has fought no one, he can’t punch, he has got no skill. He is just very fit and tough.

”I am going to beat him. It’s not going to be pretty. He is going to come for a rough and tough fight. I don’t think it is going to work well for him.”

Mullender believes aggression that has served him well in his career will be a shock to the system for Williams, and the key to causing a big upset in the BT Sport televised fight.

Williams added: “Joe is a pressure fighter, but I don’t think he will be so keen on that once I start landing.

“Maybe he is as tough as he says and can keep going forward. Boxing isn’t just about going forward and taking three shots to land one.

“If he was a massive puncher, then yeah you can try that, but he isn’t a big puncher.

He isn’t going to see the final bell.

“He is daring me to try and stop him. He can say what he wants, but he is kidding himself.

“I am just going to keep putting pressure on him and break him down. He is trying to convince himself.”

Williams is now settled at his Sheffield training base under Dominic Ingle where he trains alongside Nicola Adams, Willy Hutchinson, Billy Joe Saunders and Kid Galahad who is soon to challenge IBF Featherweight champion Josh Warrington on a Frank Warren bill.

He is close to all his gym-mates, particularly Hutchinson who he shares a flat with in the Steel City.

Williams says: “I spend a bit of time with Billy Joe and Kid Galahad. Recently Willy moved into a flat with me.

“Willy is a bit messy and leaves plates so I have to tidy up, but he is only 20.

“I am like the Dad of the house. I’m usually the child when I’m back home because my Mum does everything for me, but it is me running round after Willy here.

“Life is really good. I’m just plugging away, working hard and making sure I am bang on. I’m just counting down the days to the fight.”

JOE MULLENDER WAS given prior notice that his name was firmly in the frame for a shot at the British title, but being tipped the wink did not prompt a scouting mission to assess the strengths of a potential opponent.

Mullender challenges Liam Williams for the British middleweight title at the Royal Albert Hall on Friday March 8 and the basher from Brentwood, known as Smokin Joe, had knowledge of the prospect before the Welshman claimed the title with an emphatic stoppage of the previously unbeaten Mark Heffron at the Manchester Arena in December.

A pre-Christmas jaunt to Manchester was never on the cards though, according to the former English champion.

“No, I’m not bothered, it really doesn’t bother me,” insisted Mullender. “I could have gone there and sat ringside peeping through the ropes. What difference is that going to make?

“I can’t judge a fight and sit there wondering if I could exploit this or that. Listen, he’s gonna punch my head in and I’m gonna punch his head in. Game plans go out of the window so it is irrelevant to me who won because at this level everyone is a good fighter.

“I know what I am good at and I know what I have to do. What he’s good at, he’ll do, so there is nothing special to it in my opinion.

“I don’t feel like I had to sit there and watch it and I haven’t looked at it since either. I don’t need to, Liam is a good fighter and I am not one to sit and study and opponent.

Williams is a world level operator who has previously challenged for an Interim title at super welterweight, as well as a final eliminator for a world title. Mullender, by contrast, admits his style is of a more basic nature and could be described as up close and personal.

“Yeah and it is made for fighters like Liam, but my tactics are not going to change. I’m not going ‘I’m going to shock the world’ and then go on the back foot. I’m telling him in the press conference that I am coming to ‘ave it with him.

“So he either irons me out or we are having a fight. It is as simple as that.
“I don’t pretend to be something I’m not, but everyone can come and watch me or fighters of my style and think they will pick them apart.

“I don’t know what he will do, but he can make it a very simple fight for himself by running, staying on the back foot and jabbing my head off. That is probably what Dom Ingle is saying to him, that I am basic and if I take too many he will stop me.

“It is one thing looking at it from the outside and saying I am going to do this or that. When I am on your chest, try and stop me then. If you ain’t, I am gonna tickle your ribs and I am gonna beat you up.

“Otherwise, you’ve got to beat me up. It isn’t hard to work out.”

LIAM WILLIAMS has blasted back at Joe Mullender, claiming his big rival wishes he had his talent.

Williams makes the first defence of his crown against Mullender (11-2) at London’s Royal Albert Hall on Friday March 8 on Frank Warren’s stacked bill that is live on BT Sport.

Clydach Vale’s Williams raged: “Listen. He did watch my fight.

“He’s been at home thinking about it for weeks and wishing he could fight like me.

“He’s playing it down trying to win over the people, but don’t fall for it.”

Promising to repeat his impressive performance against Heffron who was rescued in the tenth round, the Welshman warned Mullender: “You know what time it is, sleepy time.”

Williams insists he’s another level, and that his all-action challenger is already suffering mental torture ahead of the big fight.

“He can say what he wants,” Williams added.

“When he puts his head on that pillow at night he’s already watched himself get filled in over and over and the closer it gets the worse it will get.”

Elsewhere on the show, Nicola Adams OBE will look to make history and be the first female crowned World Champion at the venue as she challenges for the WBO World Flyweight Title against Arely Mucino on International Women’s Day. Daniel Dubois follows in the footsteps of British heavyweight greats to fight at the historic venue and takes on Razvan Cojanu in his tenth fight. Johnny Garton makes the first defence of his British Welterweight title against Chris Jenkins. Lucien Reid will fight Indi Sangha in what will be his toughest test to date, while GB Flyweight Harvey Horn, Cruiserweight talent James Branch and middleweight banger Denzel Bentley all feature.

Tickets are priced from £40 and are available to buy via RoyalAlbertHall.com