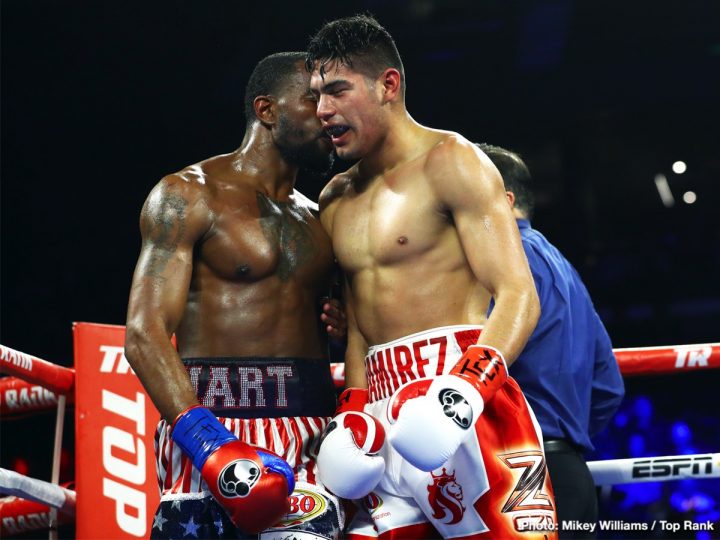 By Chris Williams: WBO super middleweight champion Gilberto ‘Zurdo’ Ramirez (39-0, 25 KOs) is moving up to light heavyweight for his next fight to test the waters in that division, according to ESPN. Ramirez, 27, wants to go after a world title at 175.

Ramirez. 6’2 1/2″, can go after the winner of tonight’s fight between World Boxing Organization light heavyweight champion Eleider ‘Storm’ Alvarez and Sergey ‘Krusher’ Kovalev. However, Ramirez won’t give up his WBO 168 lb title right away. He’s going to see how well he does in his first fight at light heavyweight, and then make a decision after that.

One problem that Ramirez will initially have in moving up in weight is his lack of punching power. Ramirez was never a big puncher at 168. So if his power doesn’t improve with him going to 175, he’s not going to be a good fit for that weight class. It’s a lot harder to win fights at 175 when a fighter has to try and go 12 rounds to win a decision against a hard puncher like Artur Beterbiev, Eleider Alvarez and Oleksander Gvozdyk. Can it be done? Yes, but Ramirez will take a lot of punishment if he has to box his way to a decision against one of those fighters.

Ramirez has knocked out only one fighter during the last four years of his career in stopping little known Habib Ahmed in the sixth round in February of 2018. Ramirez has knocked out only one of the last nine fighters he’s faced at super middleweight. Just going by those figures, it’s probably not a good idea for Gilberto to be moi up in weight to light heavyweight unless he wants to focus on winning the WBO title which is held by Eleider Alvarez, a beatable fighter.

Top Rank some of the best fighters at light heavyweight signed to their promotional company. Ramirez has a lot of options to choose from. It just depends on which of the champions he feels he matches up with the best.

As the WBO 168 lb champion, Ramirez can make a request to the WBO to be made the mandatory challenger for the WBO 175 lb title, and they’ll grant him that. This is what Terence Crawford did when he moved up from 140 to 147 to immediately challenge WBO welterweight champion Jeff Horn for his title. Saul Canelo Alvarez did the same thing when he was the WBO 154 lb champion, but he decided not to fight for the WBO 160 lb belt.

Ramirez will be taking a fight at 175 to get acclimated to the division in April or May, according to his promoter Bob Arum of Top Rank Boxing. If Ramirez looks good in that fight, then he and his manage will decide whether to go after WBO champion Oleksander Gvozdyk, who he’s sparring with in the past, IBF champion Artur Beterbiev or WBO champion Eleider Alvarez. Top Rank promotes Beterbiev, Gvozdyk and works with Alvarez, and Kovalev. Beterbiev will probably be the toughest for Ramirez due to his punching power. However, Gvozdyk can punch as well. It wouldn’t be an easy fight for Ramirez. Alvarez might be the most flawed of the champions at 175, so he would be a logical choice for Ramirez to fight if he wants to increase his chances of winning. WBA champion Dmitry Bivol is right Matchroom Boxing, and he fights on DAZN. That would make him not a good choice for Ramirez to fight. Besides that, Bivol is a tough fighter with a lot of boxing skills and power.

“He came to us. He was having trouble maintaining his weight at 168 [pounds] and thought he would be much stronger at 175,” Arum said to ESPN.com. “So without giving up his 168 title, I think we’re going to put him in a good fight at 175, and then if he comes through that we’ll match him with one of the champions to fight for a title.”

A good first non-title fight for Ramirez at 175 would be one of these fighters:

One of those guys would be ideal for Ramirez to fight, but it’s unknown if Arum wants to match him that tough for his first fight. It stands to reason that if Ramirez is going to fight for a world title in his second fight at light heavyweight, then he needs to be able to beat fighters like that.

Arum is counting on Ramirez developing more punching power when he moves up to light heavyweight because he won’t need to worry abut making weight like he did before at super middleweight. Ramirez never had punching power at super middleweight even when he first turned pro. He’s not been a big puncher from day one long before he started to having problems making the 168 lb weight limit.

Ramirez captured the WBO super middleweight title in 2016 in beating Arthur Abraham by a one-sided 12 round unanimous decision to capture the belt. Ramirez has successfully defended his WBO belt five times in beating Max Bursak, Jesse Hart [twice], Habib Ahmed and Roamer Alexis Angulo. Ramirez has been criticized by some boxing fans for taking soft opposition, and not taking part in the World Boxing Super Series 168 lb tournament when he had the chance recently. Ahmed, Bursak and Angulo were considered weak, title-milking opposition for Ramirez. The thing is, Ramirez was only able to knockout Habib. That obviously not a good sign if you’re a Ramirez fan. What happens when Ramirez is matched by Top Rank against IBF champion Beterbiev, WBC champion Gvozdyk or WBO belt holder Alvarez? Does Ramirez have to figure out a way of going 12 rounds to win a decision against those big punchers?

If Ramirez moves up in weight to 175, he would be making it less likely that he’ll ever get a fight against Gennady Golovkin, Saul Canelo Alvarez, Callum Smith or David Benavidez. Those are fights that are potentially more winnable for Ramirez than if he moves up light heavyweight to take on Beterbiev, Gvozdyk or Eleider Alvarez.