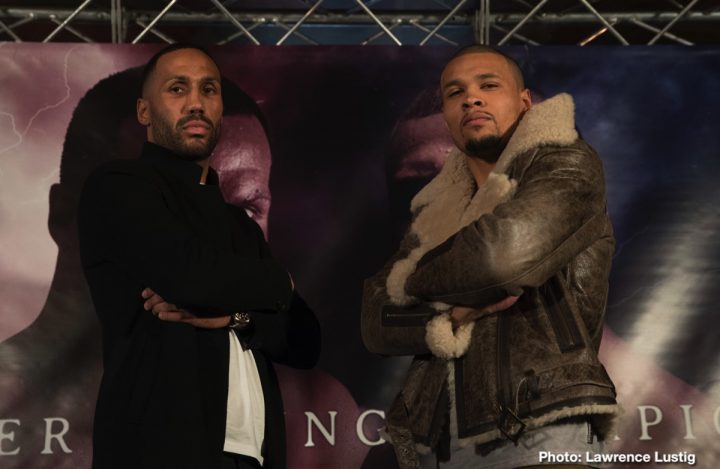 With the big-fight just under three weeks’ away, the bad blood is boiling up between the long-time enemies, who’s feud has stretched to nearly eight years, ahead of the ‘A Storm is Coming’ grudge fight promoted by Premier Boxing Champions (PBC) and Poxon Sports on Saturday 23rd February at The O2, exclusively live on ITV Box Office.

The fiery confrontation took place at a gritty converted former industrial factory in the backstreets of East London last week where DeGale and Eubank got up close-and-personal to film ITV Sports’ The Big Fight: DeGale vs Eubank Jr – Face to Face.

The special programme will broadcast on fight week and forms part of an unprecedented week of original programming content for ITV Sport, culminating in the big-fight on Saturday night.

DeGale and Eubank went face-to-face across a table with only ITV Sports’ man in the middle, the multi-award winning broadcaster Gabriel Clarke, who fired off hard-hitting questions to both fighters during a gripping and intense session that brought out the character, emotion and desire of both men ahead of their pivotal clash with everything on the line.

The 168 pound warrior have been priming their minds and bodies ready for the impending battle and with the clock ticking down towards their epic showdown, tensions were clearly running high and nearly boiled over as their escalating war of words and insults had two security guards poised to step in.

In one heated exchange DeGale ridiculed Brighton star Eubank Jr’s claims that he would outbox the more experience Olympic and Two-Time World Champion. DeGale stormed: “You think you can outbox me? I’ve won an Olympic Gold medal and world titles. You’re a joke.”

Eubank Jr. later ripped into DeGale and promised he would claim the rest his teeth, referring to the brutal world title unification fight between DeGale and Badou Jack in January 2017 when the Londoner’s two front teeth were punched out. Eubank mocked: “You’ve already had your two front teeth knocked out, I’m going to take the rest of them home with me.”

Even after Clarke had finished his questioning and filming had concluded, the pair continued to have an angry exchange and tellingly they bluntly refused to shake hands after Clarke looked for a sign of respect between them. DeGale coldly said, “I’m not shaking his hand until after the fight.”

The Big Fight: DeGale vs Eubank Jr – Face to Face certainly promises to be compelling and gripping viewing for the watching audience on ITV ahead of the eagerly anticipated DeGale v Eubank mega-fight when it premieres on Thursday 21st February at 2345.