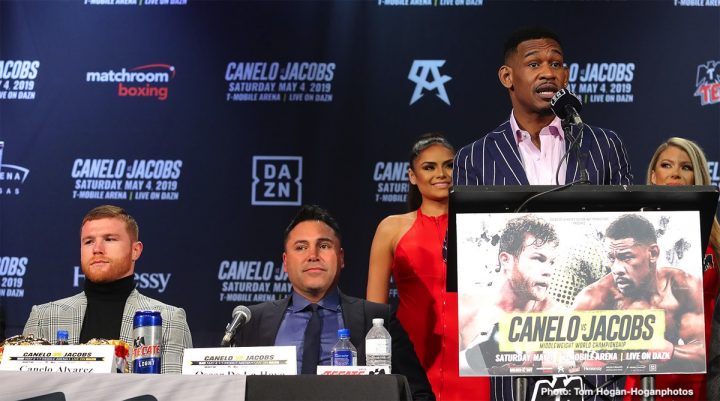 By Sean Jones: Danny Jacobs views Saul Canelo Alvarez as the loser in his two fights with former world middleweight champion Gennady Golovkin in 2017 and 2018. Jacobs, 32, considers the second fight between them to be a closer one, but he still saw GGG winning that one as well.

Jacobs (35-2, 29 KOs) is concerned that he doesn’t wind up on the receiving end of controversial scores the way Golovkin (38-1-1, 34 KOs) did against Alvarez. Jacobs says he’s going to his best to keep the judges from having a say in the outcome of his fight against Canlo on May 4 on DAZN at the T-Mobile Arena in Las Vegas, Nevada. This is the same venue that GGG fought Canelo at in 2017 and 2018, but hopefully there’s not another controversial result at that venue.

“In my opinion, I think Golovkin won the two (fights),” Jacobs said to the boxing media. “In the second fight, he [Canelo] was closer. I take my hat off because of the way Canelo adjusted, but still I think Golovkin won. It could have been a draw, but I saw Golovkin win the two.”

Jacobs isn’t the only one that felt that Golovkin deserved wins in both fights. A lot of boxing fans, and media members felt that Canelo didn’t do enough in both fights. Canelo gassed out after three rounds in fight #1 and fight #2. Alvarez didn’t have the stamina to get the job done in the second half of the two fights. But the judges that were assigned by the two fights by the Nevada State Athletic Commission, they felt that Canelo did well enough to get a draw and a close 12 round decision victory.

These are the scores for the two fights:

The New Yorker Jacobs plans on using his size, reach, speed and ring IQ to get the better of the 5’8″ Canelo when they meet up on May 4 on DAZN.

Jacobs isn’t too happy with the 10 pound rehydration clause in the contract for the fight that Golden Boy wanted, even though the International Boxing Federation don’t require the secondary weigh-in. Jacobs sees Golden Boy Promotions as trying to stack the deck in Canelo’s favor with the use of the rehydration clause, which will limit both fighters from weighing more than 170 pounds on the morning of the fight. The 5’11 1/2″ Jacobs has the bigger frame, and he’s four years older than the 28-year-old Canelo.

Well, unless Canelo wears elevator shoes on May 4 to make himself 5’11 1/2″ like Jacobs, he’s going to come into the fight the same 5’8″ fighter he’s always been. Some boxing fans think Canelo wore lifts in his shoes at the kick off news conference with Jacobs in New York this week. Canelo looked considerably taller than he normally is, and he could been looking to gain another edge. The rehyration clause that Golden Boy has in the contract gives Canelo one advantage over Jacobs. The other advantage for Canelo is having the fight take place at the T-Mobile Arena where he’s had great luck recently in his 2 fights against GGG.

“(Canelo) will see the difference in size. He will see the speed and athleticism, and [figure] that maybe he needs a different form of response from his part and maybe he will change his strategy or simply go back to what he regularly does,” Jacobs said.

What Canelo usually does is hang on the ropes when he fights guys that press him or fight at a fast pace. In Canelo’s last two fights, he changed tactics in going at Rocky Fielding and GGG. Canelo would have had problems against GGG in fight #2 if the Kazakhstan fighter had gone straight at him when he would come forward to meet him in center ring instead of backing up, which gave the judges the impression that he was being walked down by Alvarez.

Jacobs cannot back off and give ground to Canelo the way GGG did in the second fight. Jacobs needs to treat Canelo the same way he treated Peter Quillin and Sergio Mora by unloading on him with flurries to get him out of there. Canelo gets tired when he has to throw punches in consecutive fashion. He gets tired, and he loses all the pop on his shots. Canelo is a much different animal when he’s fighting at a slow pace where he can load up on his hots and try impress the judges. Golovkin should have figured out from watching the last seconds of round 12 in the first fight that Canelo is vulnerable when the action gets out of control, and he’s having to deal with a lot of punching coming his way. He gets tired within seconds, and he’s there to be beat.