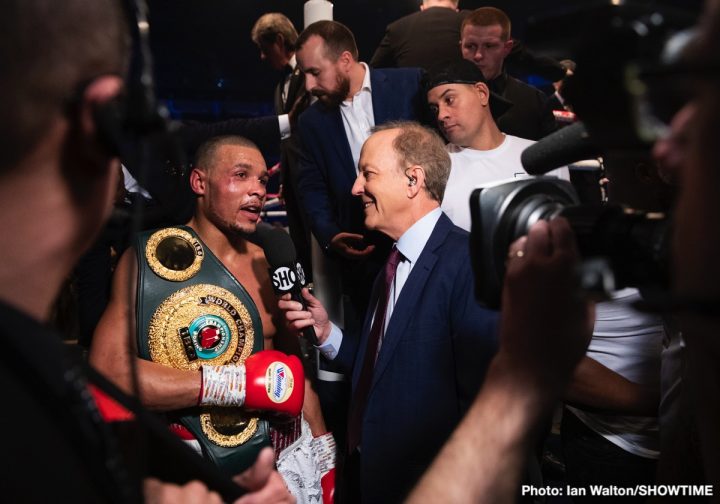 Chris Eubank Jr. earned a career-defining victory with a hard-fought unanimous decision over British rival and former two-time world champion James DeGale in a super middleweight grudge match Saturday on SHOWTIME from The O2 in London.

Working in his first bout with a full-time trainer, Eubank fought a controlled fight. The former world title challenger floored DeGale in a rough moment in the second, stunning his rival with a big left hook against the ropes and flooring him moments later with a strong right cross that sent DeGale to the canvas for just the second fight of his career.

DeGale, who established his championship career as a slick southpaw, was unable to jab at range and couldn’t handle the constant pressure from Eubank. The former Olympic Gold Medalist resorted to lunging from the outside and was largely ineffective on the inside, often clinching while in close quarters.

“I knew he was going to come at me like that,” Eubank said. “He’s a slick southpaw, but my game plan worked. Smart pressure and not getting too ahead of myself. He’s a hell of a fighter, hell of a competitor but at the end of the day my head and my heart won this fight.”

“There was a lot of animosity leading to this fight. I told him, ‘This is my time,’ and it was. He’s a veteran of the game, he throws big shots and he manages to stay up. To get up after those knockdowns is a statement about his tenacity and the type of fighter he is.”

The second knockdown came in the 10th as Eubank landed a powerful left hook that buckled DeGale with just 30 seconds left in the round. Once again, DeGale tried to clinch to avoid the knockdown, but his hand touched the canvas and was ruled just the third knockdown of his career.

After the fight, DeGale, who was the first British fighter to earn an Olympic Gold Medal and a world championship, appeared to be leaning toward retirement.

“I’m going to go back and talk to my team, my family, and decide. I left my mark in boxing. I won an Olympic Medal, two world titles and it may be the time to hang it up.”

While DeGale contemplates retirement, Eubank has his sights set on another shot at a world title.

“This was the most important fight of my career, and I made a statement. I’m back where I’m supposed to be, at the top of the food chain. I’m coming for all the belts in the middleweight and super middleweight division. I’m fighting everyone they put in front of me.

“I’m glad to make my American debut here on SHOWTIME. I’m glad to be introduced to the American public this way – making a statement.”

After an exciting first round, Joyce opened up the action in the second with a monstrous straight right and unloaded from bell to bell against a defenseless Stiverne, who continued to punch back despite eating damaging shots. After a series of combos in the opening minute of the third, Joyce caught Stiverne with a straight right hand to send him to the canvas for the fifth time in his professional career. Stiverne survived the round while throwing looping shots but failed to return any meaningful punches.

Joyce, the 2016 Olympic Silver Medalist, consistently set up a powerful straight right behind an accurate and effective left jab throughout the fight. With Joyce (8-0, 8 KOs) continuing to tee off against a largely defenseless Stiverne, referee Howard Foster stepped in to halt the contest at 2:26 of the sixth. Stiverne (25-4-1, 21 KOs) did not protest the stoppage.

“Big respect to Stiverne – like a true champion, he’s very tough and was still throwing shots, but I guess I was just a bit too much,” Joyce said. “It was about being patient. He’s such a tough guy that he took those shots no problem.

“I was hitting him with everything I had, including the kitchen sink. I listened to Abel (Sanchez) in the corner, did everything he said and it went well. My jab was really effective. I’m a seasoned vet. I picked up my poise and remained calm along the way.

“Big things are coming. My next one will be for the WBA Regular (Title) and I’ll be back in the gym soon. I need to have a couple more fights like this and then I’ll be ready for the big champions.”