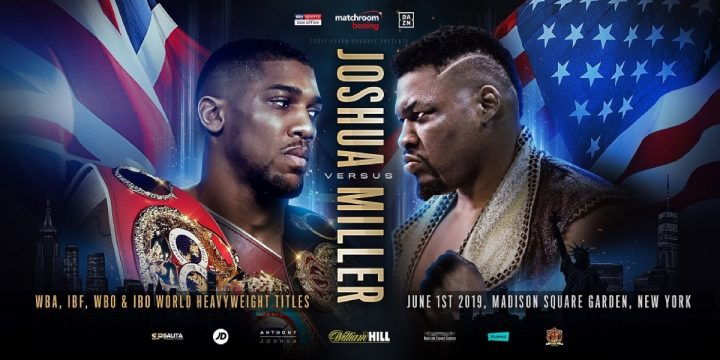 By Jeff Aranow: Promoter Eddie Hearn says he’s planning on stacking the Anthony Joshua vs. Jarrell Miller fight card with interesting fights on June 1 at Madison Square Garden in New York. Most of the fights that Hearn talks about are ones that are more hoped for than reality.

With Joshua (22-0, 21 KOs) defending his IBF/IBO/WBA/WBO heavyweight title against Miller (23-0-1, 20 KOs) in a voluntary defense on Sky Box Office and DAZN, it’s more important than ever for Matchroom boss Hearn to stack the undercard with as many fights as possible on June 1 to bring in the PPV buys and subscribers.

These are the fights that Hearn has cooking for the Joshua-Miller card:

Chris Algieri vs. Tommy Coyle: Algieri (23-3, 8 KOs) is making a comeback with his career. He looked poor in his recent fight against Daniel Gonzalez last January. Although Algieri won the fight by a 10 round decision, he gassed out after the first five rounds, and was fortunate to win a 10 round decision. Coyle (25-4, 12 KOs) might not be a big enough fight to lure the 34-year-old Algieri into taking this match. This is more of a domestic level opponent than a world class guy. If Algieri is fine with fighting that type of guy where he has nothing to gain, and everything to lose, then he might agree to take it. Algieri wants to get the big fights, but Coyle is nowhere near the level that Chris is looking to be at. If Algieri looks bad against Coyle, and gets beaten, it’ll likely be the end of the road for him. There are guys that Algieri can afford to lose to like world class guys, and then ones that he cannot to. Coyle is the type that Algieri cannot lose to if he wants to be taken seriously as a contender at light welterweight. It’s easy to understand why Hearn wants to make this fight so badly. Coyle has nothing to lose because he’s not seen as top 15 contender at lightweight. Algieri is a former WBO light welterweight champion, whose career has fallen apart after he made the mistake of moving up to 147 to fight guys that were too big and too strong for him in Manny Pacquiao and Errol Spence.

Donnie Nietes vs. Khalid Yafai: This is a great fight for WBO super flyweight champion Nietes (42-1-5, 23 KOs), but not a good one for WBA champion Yafai (25-0, 15 KOs), who has been looking bad as of late. As long as Hearn knows that the 29-year-old Yafai will be out of his class in this fight, then he should go ahead and make it. Nietes, 36, looked good recently in beating Kazuto Ioka by a 12 round split decision last December in winning the vacant World Boxing Organization super flyweight title. That was the second time that Nietes had fought for that belt. He fought to a controversial 12 round draw for the WBO belt in his previous fight against Aston Palicte last September. A lot of boxing fans thought Nietes deserved the nod in that fight. Yafai is coming off of a controversial 12 round decision win over Israel Gonzalez last November. Yafai struggled the entire fight. He’s going to have to do a lot better than that if he faces Nietes. However, Hearn wouldn’t be making this fight if he didn’t believe that Yafai has a good chance of winning, so it might not be a bad one for him after all. Hearn generally doesn’t make fights where his guys have a good chance of losing.

Raymundo Beltran vs. Ricky Burns 2: This is a fight that is kind of late in the game to be having a rematch for. Burns (43-7-1, 16 KOs) is 35-years-old now, and has lost two out of his last three fights. Burns isn’t the fighter that he once was, and neither is the 37-year-old Beltran. Six years ago, Burns fought to a controversial 12 round draw against Beltran in Glasgow, Scotland. That was a fight in which Burns suffered a jaw injury in the 2nd round, and he spent the remainder of the fight holding and moving. It looked like a clear win for Beltran, as he was the only one landing punches. Burns was too hurt to do anything other than to hold and move. After the fight, there was talk that the two fighters would eventually face each other in a rematch, but it never happened. Burns’ career quickly went downhill not long after that with him losing to Terence Crawford, Dejan Zlaticanin, Omar Figueroa Jr., Anthony Crolla and Julius Indongo. Burns did win his last fight against Scott Cardle last November. Beltran (36-8-1, 21 KOs) won his last fight in beating Hiroki Okada by a 9th round knockout win last Sunday on the undercard of Jose Ramirez vs. Jose Zepeda in Fresno, California. This was Beltran’s first fight at 140, which is where he wants to campaign at now. He didn’t look good in that fight, but he’s got enough left in the tank to give Burns big problems if a fight between them is made. It would be up to Beltran’s promoters at Top Rank if they want to let him fight Burns on DAZN. Top Rank has a deal with ESPN, so it’s not too likely they’ll let Beltran fight Burns.

Josh Kelly vs. TBA: Hearn isn’t saying who he plans on matching up against welterweight Josh Kelly (8-0, 6 KOs). It’s going to have to be a step up from the guys that he’s been facing because his last two fights have been against guys that weren’t in his league. Hearn did a good job of matching Kelly against former junior middleweight champion Carlos Molina last March, and he looked superb in beating him by a 10 round decision. Hearn then took the 25-year-old Kelly’s career backwards in matching him against Walter Fabian Castillo and Kris George in his last two fights. Kelly easily beat them both, but the fights were so non-competitive he didn’t get anything out of those matches.

“I’m looking for a major fight for Buatsi there if he can come through against [Liam] Conroy, I’d like to take Josh Kelly there,” Hearn said to IFL TV. “I’d like to do Tommy Coyle vs. Chris Algieri, Ricky Burns vs. Ray Beltran. I’d like to do Kal Yafai against [Donnie] Nietes in a unification fight.”


« In-depth with Joe Hughes: Champion against all odds

Marcus Browne vs. Jean Pascal in the works for the spring »