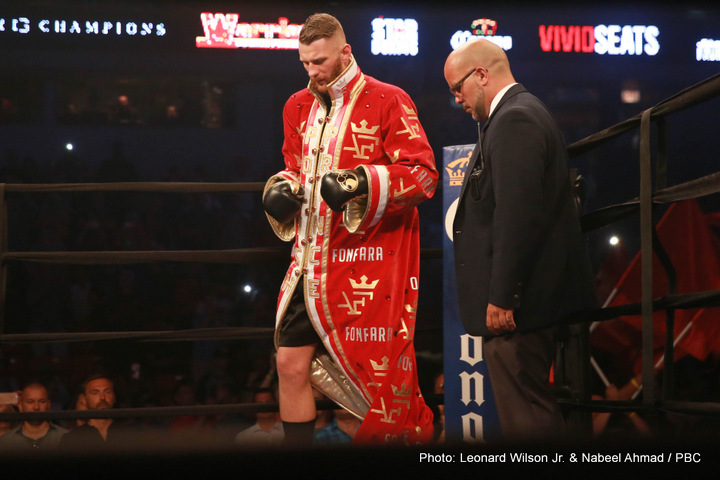 CARSON, CALIF. (February 14, 2019) – Veteran contender and two-time title challenger Andrzej Fonfara has withdrawn from his match against Edwin Rodriguez that was scheduled to be part of Premier Boxing Champions on FOX and FOX Deportes on Saturday, March 9 from Dignity Health Sports Park, formerly StubHub Center, in Carson, California.

Stepping in as the replacement co-feature is a 10-round, all-action welterweight showdown between hard-hitting Abel Ramos and battle-tested Francisco “Chia” Santana. Coverage begins at 8 p.m. ET/5 p.m. PT and is headlined by WBC Welterweight World Champion Shawn Porter making his first title defense in primetime against mandatory challenger Yordenis Ugas.

Tickets for the live event, which is promoted by TGB Promotions, are on sale now. Tickets can be purchased at AXS.com.

The 31-year-old Fonfara announced that he is retiring from boxing, prompting him to withdraw from the fight against Rodriguez on Wednesday.

“There is no more enthusiasm and above all no more of the motivation and adrenaline that gave me the desire to go into the ring and compete,” Fonfara said. “I am healthy. Everything is okay. But I no longer have the heart for boxing.”

Ramos (23-3-2, 18 KOs) has put together four technical knockout victories since losing a hard-fought majority decision to welterweight contender Jamal James in front of James’ hometown crowd in Minneapolis on April 13, 2018. The 27-year-old from Casa Grande, Arizona proved against James that he’s a formidable opponent for anyone in the 147-pound division.

Santana (25-6-1, 12 KOs) needs an impressive victory over Ramos to remain a force in the welterweight division. The 31-year-old Santana of Santa Barbara, California is coming off a majority decision over the always-tough Felix Diaz and owns victories over then unbeaten fighters Eddie Gomez and Kendal Mena.


« The Eubank’s – An Enigma that divides opinion between boxing fans