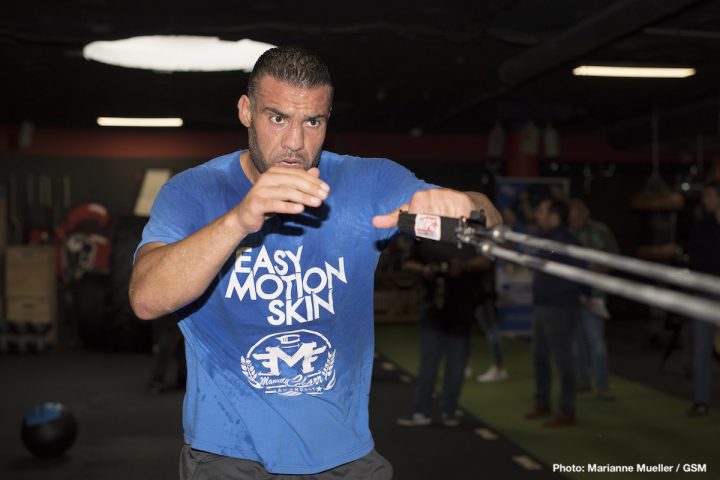 By Jim Dower: WBA World heavyweight champion Manuel Charr (31-4, 17 KOs) has been ordered to defend his secondary WBA title against 45-year-old mandatory Fres Oquendo (37-8, 24 KOs) by the World Boxing Association, according to ESPN. Charr, who is coming coming off of a drug suspension, will have two months to negotiate the fight with Oquendo, who hasn’t fought in 4 1/2 years since his 12 round majority decision loss to former WBA heavyweight champion Ruslan Chagaev on July 6, 2014 in Grozny, Russia.

The WBA ordered the Charr vs. Oquendo fight last Money, and it’s now up to those two fighters to get this match finally out of the way. The Charr-Oquendo fight has been talked about for ages by boxing fans. It’ll be good to get it over with so that the fans can see arguably more interesting matches.

The WBA suspended Charr for 6 months during the investigation last November following a positive test for a banned substance by the German fighter, but they didn’t strip of his title. Charr won the vacant WBA ‘regular’ heavyweight title in beating 42-year-old ALexander Ustinov by a 12 round unanimous decision last year on November 25 in Germany.

The WBA made it known before the Charr vs. Usinov fight took place that the winner of the match must defend the title against Fres Oquendo, who has been out of action since 2014 in the first mandatory defense of the title. The reason the WBA didn’t strap the 34-year-old Charr of his title is because his team protested the way the drug samples were handled by VADA, according to Dan Rafael of ESPN.

Charr and Oquendo were supposed to have fought each other last year on September 29, but the fight was canceled after Char tested positive for the banned substances epitrenbolone and drostanolone during a VADA test.

The winner of the Charr vs. Oqunedo fight must fight the winner of a match between interim WBA heavyweight champion Trevor Bryan and Jarrell ‘Big Baby’ Miller within four months [120 days]. The WBA will need to find another opponent for Bryan to fight if the Matchroom Boxing promoted Miller (23-0-1, 20 KOs) chooses not to take the fight. Miller is currently in the running for a title shot against IBF/IBO/WBA/WBO champion Anthony Joshua for April or June of this year. If Miller gets that fight, then he won’t be available to face Bryan for his interim WBA title.

VADA will be testing Charr, Oquendo, Miller and Bryan in the lead up to these fights.

WBA continues to have two title belts at heavyweight despite lots of criticism from boxing fans, who don’t understand why a sanctioning body would need to have two championship belts in the same weight class.

The WBA currently has two champions in the following divisions as of right now: