Sam Maxwell: “I Am Ten Times A Better Boxer Than Ohara Davies” 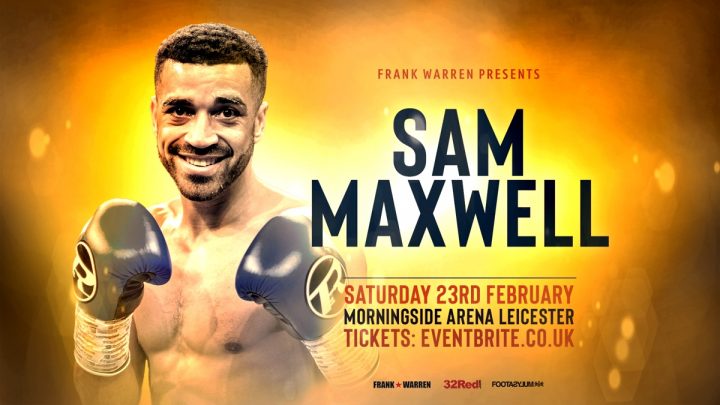 Liverpool’s Maxwell (10-0-KO8) gets his big chance against the Spaniard in Leicester – live on BT Sport – and is poised to show the arena and a televised audience just what a threat he poses to the big names at 140lbs.

Maxwell said: “This is my biggest fight yet and my first chance to show myself on the big stage. I plan to win my first pro title and blast onto the scene here.

“I know if I get through this fight like I know I can, I’ll be noticed and it’ll be the start of a big year for me. It feels real now and I’m beginning to get properly excited.

“Fighting for a title makes it that much easier to push myself. I’ll be going that little bit further than normal because I’ve got real fire in my belly with something so meaningful to aim for.

“I’m keen for people to see how good I am. Sometimes when I’ve performed well, I think: ‘I wish that had been on TV.’ Now I’m high up on a card in a title fight, I’ve got the screen time and I hope the fans like what they see.”

Maxwell has blasted his way to a degree of prominence since turning professional in late 2016, with only two of his 10 opponents taking him a four and six-round distance.

‘Super’ faced elite fighters such as Vasyl Lomachenko during an illustrious amateur career.

SAM MAXWELL IS now into double digits as a professional super lightweight and believes he has served his time on the learning curve.

The Liverpool lad, who has been a regular feature on big arena undercards, insists he is ready to step into the spotlight and has reached the point in time when a little bit of name-dropping doesn’t do any harm, but one name in particular appeals more than most.

“I am ready for a step up, definitely,” reasoned Sam, who reached 10-0 at the Manchester Arena in December. “I know they can see something in me because Frank has put me on all these amazing shows, so I know they believe in me, but I think it is about time I get pushed on so I can show them what I am really all about.

“I want to show my level to the public as well.

“There are loads at my weight that would be brilliant fights and I would come out on top. If I was offered Ohara Davies I would take that fight and I’d be confident of winning.

“I am ten times a better boxer than him, so I’d just have to be switched on and watch out for his right hand – which he didn’t throw against Catterall!

“Ohara is a big name as well and I am ready to move to his level,” added Sam who, age-wise, is the senior citizen of the Brit pack at 140lbs.

“They are younger lads than me, but I feel like a young 30-year-old to be honest because I haven’t had a tough career with any hard fights. I still feel fresh and young and my training in Scotland with Danny (Vaughn) has a given me a new lease of life.

“I feel I am the best boxer I have ever been and I’ve made massive improvements.”

Tickets for Bowen v Clark on Feb 23 at the Morningside Arena, featuring Sam Maxwell, are available from £40 are on sale NOW via Eventbrite

Ohara Davies aims to begin a knockout streak in 2019 and leave nothing to the judges for the rest of his career.

‘Two Tanks’ (18-2-KO14) was outpointed by world-ranked Jack Catterall in a surprisingly tactical affair back in October and with the super-lightweight division buzzing, Davies is preparing for a statement of resurgence.

Davies said: “I’m thinking I’ll be back in the ring in April or May. I’ve got to work on a few things and bring back the old OD. When I say that, I mean knocking guys out with the ruthlessness I had in the past.

“I’ve been enjoying my time off. This year has been a really hard year – I’ve been in camp for most of it – so it was time to relax. I was the biggest I’ve ever been but I’ve started back training now.

“As my career has gone on, it’s become about hitting and not getting hit. Before I was hitting and knocking guys out and I think that’s what I need to bring back. That’s the one we’ll see when I return to the sport.

“Joe Hughes just won the EBU title and I wouldn’t mind taking him on because that’s a decent belt. That’s the only name I can think of off the top of my head and prospective opponents are the last thing on my mind right now. I’ll look at the options with MTK Global and Frank Warren in the new year and look at the options.

Davies, 26, is considered one of the biggest punchers in the 140lb division.