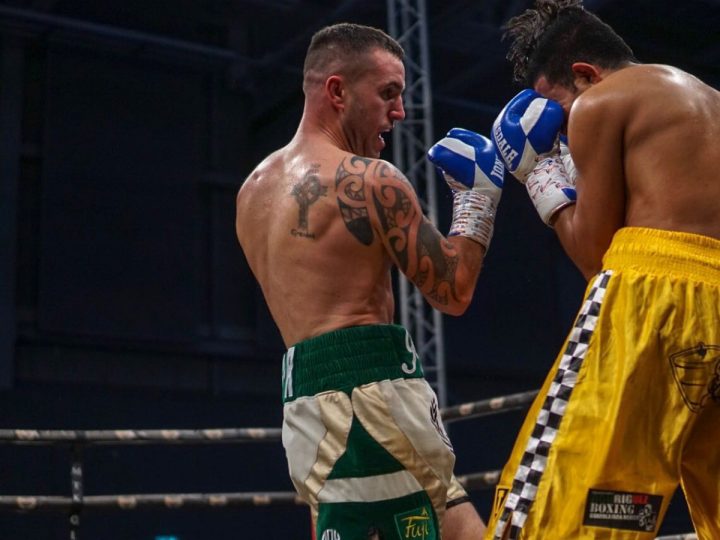 Stephen Tiffney believes the only defeat of his career so far has made him a much better fighter ahead of his battle with David Oliver Joyce.

The two men will clash for the vacant WBO European featherweight title at Bowlers Exhibition Centre in Manchester on March 15 – live on iFL TV.

Tiffney (10-1) came up short in his last title fight when he was beaten by Lewis Paulin for the Scottish Area Featherweight belt in December 2017, but he feels that could have been a blessing in disguise.

Tiffney said: “I found out a lot about myself from that fight. It was my only defeat and there was a big amount that I learned, so it can sometimes be a good thing.

“There are some things that you only realise when you lose, so it definitely made me a better fighter and I don’t see it as a negative.

“I’ve got Joyce now and this is the perfect start to the year. I’m looking to pick up titles this year so I can’t wait.

“Once you get hold of that first title you can then push onto bigger and better things, but I’m not looking past Joyce and I’m fully focused on him.”

‘The Punisher’ Joyce (9-0-KO7) clashes with Scotland’s Tiffney (10-1-KO4) at Bowlers Exhibition Centre in Manchester on March 15 – live on iFL TV – and is confident of taking home the vacant featherweight crown.

Joyce said: “As an amateur, I boxed some of the best in the world but regardless of the opponent, there’s been no messing about. This guy will bring the best out of me and I’ll show the world what I’m about.

“He’s a decent guy and he’s a good, stronger fighter. I’ve never sparred him but I know his style. He’s a switcher. I’m not going to take anything for granted because he’ll come with a game plan.

“I won’t disrespect him but I’ve got an amateur record behind me and he hasn’t. I bring everything – all those experiences at world, Europeans and Olympic level – with me. He doesn’t have a good amateur record so I have it all to lose.

“This is a great show for MTK Global. Some people don’t have subscription channels and now all they need to do is watch it for free on iFL TV.”

Joyce won two European Union gold medals in the amateur ranks and was selected for the 2016 Rio Olympics, where he reached the last 16.

In addition to Joyce vs. Tiffney, the MTK Global card in Manchester features the likes of Raza Hamza, Macaulay McGowan, Ben Sheedy, Craig Bunn and more.

Macaulay McGowan has revealed that linking up with a new trainer helped to get him back on the straight and narrow as he prepares for his first fight in over 18 months.

McGowan (12-0-1) makes his return when he competes at Bowlers Exhibition Centre in Manchester on March 15 – live on iFL TV.

It is his first fight since joining trainer Ben Lancaster at The Shed, and McGowan has made it clear just how vital that was to his comeback.

McGowan said: “I had a lot of growing up to do outside the ring. I’m with Ben Lancaster now and without him I wouldn’t be fighting.

“He has really helped me get back to where I needed to be. When I went to him in September, I was 15 stone, but thanks to him I’ve become part of the family.

“I was looking for a coach who I could be with for the rest of my career, and I think I’ve found it. I’m training with dedicated kids who are all hungry. My biggest flaw has been consistency. I have the ability and talent, but now it’s time to turn the screw and perform at my best.

“It’s been a long time coming this fight. I haven’t been in the ring for around 18 months so my friends and family can’t wait. We’ll shake the cobwebs off in March and then look at big fights later in the year.”

Davey Oliver Joyce and Stephen Tiffney will clash for the WBO European featherweight title in Manchester on March 15.

Joyce said: “There’s real excitement now in the camp. There’s massive motivation now. Even last year, I was saying I wanted big fights. MTK Global said they had big plans for me and now we’re here.

“The opportunity has come and I can’t wait for it. I’m feeling great in camp already after just two weeks. In eight weeks time, I’m going to be fantastic.”

Tiffney added: “It’s the perfect fight for me at this time. These are the bouts I’m after and he’s a good opponent who is going to bring the best out of me.

“I’ve seen a few of his fights in the past and I’ve known of him ever since he was doing well things in the amateurs. It’s a contest that really excites me, especially with a title being on the line.

“This is a great way to start the year. Once you get your first title it can push you on to bigger and better things, so I’m looking forward to getting in there.”

Joining Joyce vs. Tiffney on the card will be a host of local talent including Ben Sheedy, Mike McGoldrick, McAulay McGowan and more.

« Cheeseman vs Garcia this Saturday – Quotes & Where To Watch

Sergey Kovalev in Frisco – Quotes, Photos & How To Watch Kovalev vs Alvarez II »