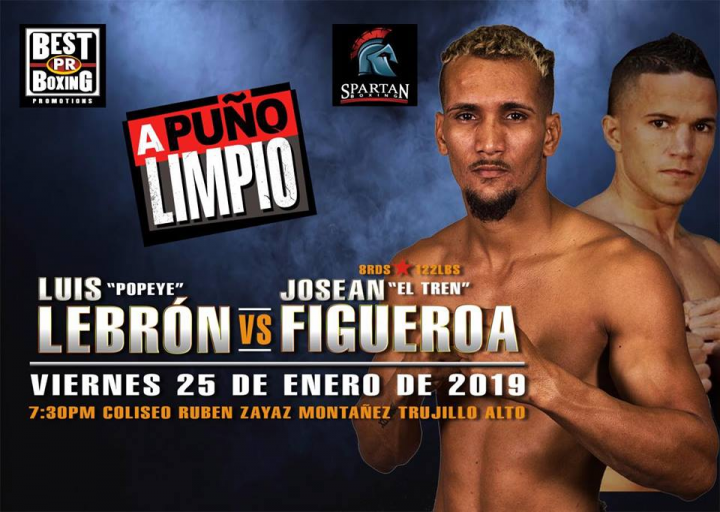 After a successful return in 2018, the series “A Puño Limpio” opens 2019 with eight fights and in the main event the WBO Latino featherweight champion Luis “Popeye” Lebrón will face Josean “El Tren” Figueroa this Friday, January 25, Ruben Zayas Montañez Coliseum of Trujillo Alto in a presentation of PR Best Boxing Promotions (PRBBP) in association with Spartan Boxing, which will be broadcast on Facebook Live.

“A Puño Limpio”, a series that had its first part between 2011 and 2012 with shows around the island, returned to scene in 2018 with five events, in which some titles bouts were disputed and featured prominent Puerto Rican fighters and prospects in its new scenario, the Rubén Zayas Montañez Coliseum in Trujillo Alto.

“A Puño Limpio returns in 2019 with monthly events in Trujillo Alto, and to start we present on Friday the WBO Latino champion Popeye Lebrón facing a good challenge when he faces veteran Josean” El Tren “Figuero. Also a challenge for Lebron is that he will fight at 122 pounds in order to campaign on that weight,”said Ivan Rivera, president of PRBBP.

The Mayor of Trujillo, José Luis Cruz Cruz, said that “the sport in Trujillo Alto is at its best and A Puño Limpio has become one of the most anticipated events in our town.

“We have been training hard because we are going to 122 pounds and I feel in tremendous condition, we are going to do our job in the ring and give a good fight as always,” said Lebrón.

This card will be broadcasted on Facebook Live through www.facebook.com/PRBestBoxing.