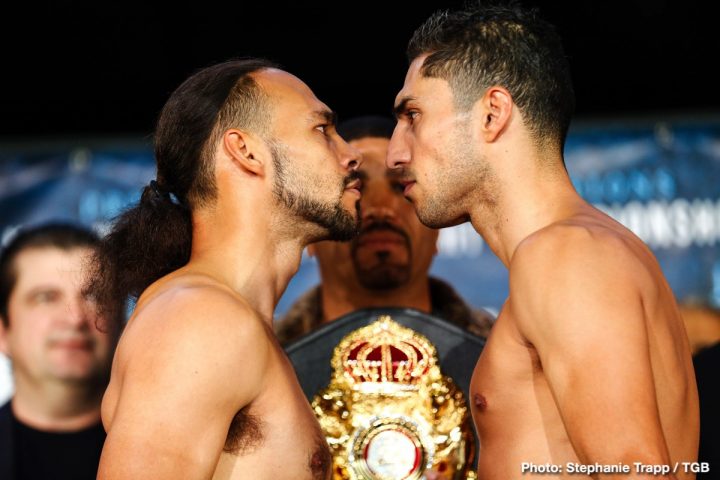 By Mike Smith: Keith ‘One Time’ Thurman (28-0, 22 KOs) weighed in at 146.6 pounds on Friday for his return the ring after a 2-year absence against former junior world title challenger Josesito Lopez (36-7, 19 KOs) on Saturday night on Premier Boxing Champions (PBC) on FOX at the Barclays Center in Brooklyn, New York.

Lopez, also known as the ‘Riverside Rocky,’ weighed in at 146.5 lbs. Both fighters looked in great shape. Thurman’s midsection looked smooth, like he hadn’t been doing enough sit-ups during training camp. Lopez looked like he wanted to take Thurman’s head off during the weigh-in. You could tell from looking at the two fighters that Lopez wants to KO Thurman. This is Josesito’s biggest fight since his victory over ‘Vicious’ Victor Ortiz in 2012. Lopez has the look of someone that is highly motivated, and isn’t going into the fight on Saturday night to just roll over and let Thurman beat him. 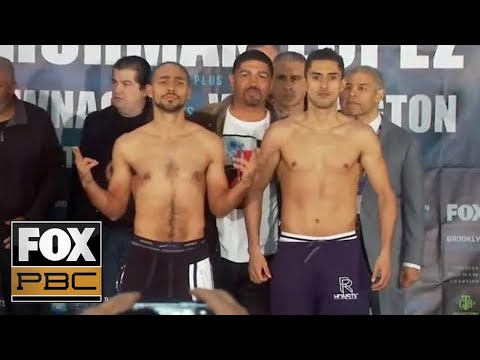 Josesito is going to get his licks in on Saturday night. If Thurman’s stamina isn’t improved from his last fight against Danny Garcia, we could see an upset. What the boxing fans have to keep an eye on, besides Thurman’s stamina issues, is his right elbow. He had surgery on that area, and he might not have same punching power that he had before. Thurman will need to be able to take Lopez’s power shots on his elbows. Thurman has to be able to hold up under the bombardment from Lopez for him to have a chance of winning.

Moments after both fighters weighed in, Thurman and Garcia had an intense stare down with neither of them wanting to give in to turn away.

Thurman, 30, will be defending his WBA Super World welterweight title after being out of the ring for two years. What the boxing fans have to hope for is that Thurman doesn’t go into another 2-year hibernation after he fights Lopez on Saturday night on PBC on FOX. Thurman wants to fight Manny Pacquiao, WBC champion Shawn Porter and former two division world champion Danny Garcia. Thurman is once again saying that IBF champion Errol Spence Jr. is someone that he wants to fight at some point in the future, but only after he gets his fights out of the way of the guys he wants to face.

With the long period of time that Thurman has been out of the ring, it’s going to be interesting to see how he performs on Saturday night. You can’t rule out an upset just based on activity of the two fighters. The ‘Riverside Rocky’ Lopez has some pop in his punches, a great engine, and he’s more than willing to turn the fight into a brawl. In Thurman’s last fight against Danny Garcia, he gassed out after six rounds, and was on the run in the second half of the fight. Two years out of the ring likely hasn’t helped Thurman’s stamina, especially if he’s just sitting on a mountain playing his flute.

Lopez has been putting in the man hours to stay sharp with his craft, and not licking his wounds from his past fights. It’s not beyond the realm of of possibility for Lopez to wear Thurman down in the first six rounds, and then finish him in the second half. Boxing isn’t a sport where you can treat it like a part time job, and Thurman hasn’t been able to dedicate himself to the sport for a long time due to his injury problems.

“In the preparation, trainers where it comes from. I got a great team with Robert Garcia, and we prepared at a championship level, and I’m ready go to,” Josesito said in his post weigh-in interview on Friday. We’re going to do it tormorrow night, no matter what happens. It’s going to be a fight you don’t want to miss,” Lopez said. 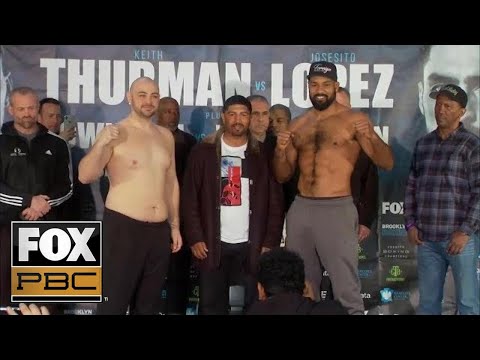 Heavyweight contender Adam Kownacki (18-0, 14 KOs) weighed in at a hefty 258 1/2 pounds for his 10 round fight against former heavyweight world title challenger Gerald Washington (19-2-1, 12 KOs). Kownacki, 29, came in a little lighter for this fight than what he’s been weighing recently. Kownacki has been mostly fighting in the 260s, but still performing at a high level. Washington, 36, was a lot trimmer, and appeared to be be much better physical condition than Kownacki. To look at the two fighters standing side by side, one would think that Washington is the guy with the bright future rather than flabby looking Kownacki. In boxing, the more talented fighter doesn’t always have the superior physique. Kownacki is expected to win with ease on Saturday night.

2012 silver medalist Tugstsogt Nyambayar (10-0, 9 KOs) weighed in at 125.5 pounds for his fight against Claudio Marrero (23-2, 17 KOs). For his part, Marrero, 29, weighed in at 125.5 lbs. Nyambayar and Marrero will be battling for the vacant International Boxing Organization World featherweight title.