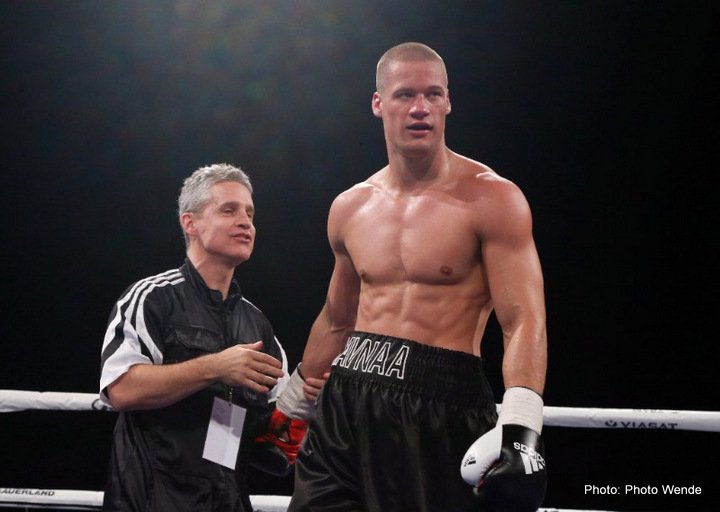 Jamshid Nazari (3-0, 1 KO) continues his promising career on March 2 with a six-round welterweight clash against Ivica Gogosevic (12-24-2, 5 KOs) on the undercard of Kai Robin Havnaa’s cruiserweight showdown with Rad Rashid.

Nazari is the latest addition to an action-packed show in Arendal, and following victories over Bakar Gelenidze, Nika Nalikashvili and Richard Walter, the Kristiansand-boxer says he is excited to be fighting so close to home.

“I’m looking forward to putting on a great show on March 2 at the SØR Amfi in Arendal,” said Nazari. “Ivica Gogosevic is a strong, experienced opponent, who I’m sure is going to give me a good fight.

“Fighting in Arendal will be like fighting at home. It will be my first time fighting so close to home, so I’m expecting to have a lot of fans coming to support me.”

Although only 26 years old, Nazari has already experienced a lot in life. At the age of 14, he was forced to flee his native Afghanistan after both parents were killed, eventually arriving in Norway, where he discovered his talent for boxing.

When asked what he hopes to achieve in his professional boxing career, the talented fighter does not mention World titles, money or fame, rather he responds: “I want to be a role model for the Afghan & Norwegian youth.”

Thanderz was scheduled to defend her European Super Featherweight title against Elhem Mekhaled on December 22, but suffered a herniated cervical disc in sparring, forcing her to withdraw from the contest and vacate her title.

Now fully recorded, the undefeated former EBU and WBC International Champion plans to kick-start the year with a victory over the unbeaten Brit Rachel Ball before targeting more titles in 2019.

“I’m really looking forward to fighting in Arendal on March 2. It has been several months since I was last in the ring, and I feel a huge motivation to be back again. The fact that I will be boxing in the country I was born makes it even more exciting,” says Thanderz, who currently resides Alicante, Spain.

“I was injured during a sparring session when preparing to defend my EBU title, and it was quite complicated for a while. I had to stop training completely and I was unable to spar, but I’m completely healed now. I started sparring again two weeks ago, and I feel absolutely great.

“I will be training in Spain for this fight, doing my boxing training at the Vista Gym in La Nucia with my boxing coach Jesus Labradador, and my physical exercises with Christian Marcet at Odin Athletes. We plan on bringing over two sparring partners to ensure I am one hundred percent ready for the fight. One of them is Nina Bradley from the UK, who I have trained with in the past.

“I think Rachel Ball seems like a tough fighter, and I am sure she will come well prepared to face me. She is also unbeaten at the moment, so I expect she will be hungry for victory. Nevertheless, I will be more prepared than ever, and I’m looking forward to ending the fight with 11-0 as my new record.

“My goal for the rest of the year is to have a active 2019 with several fights, get back my European Title, and then aim for some bigger belts!”

Kai Robin Havnaa (13-0, 11 KOs) will headline his hometown arena on March 2 as Team Sauerland return to the SØR Amfi in Arendal, Norway.

Following a hugely successful debut show on February 3, which saw Havnaa blast out Daniel Vencl inside two rounds, Team Sauerland are back with another event, which promises to be ‘bigger, better and more exciting’.

Havnaa, undefeated in his thirteen professional contests after a devastating knockout win over Frank Bluemle on April 28, 2018 in Offenburg, had been sidelined with a thumb injury, but now full recovered, says he cannot wait to walk out in front of his home fans in Arendal for a second time.

“It was an unforgettable experience,” says Havnaa. “The feeling I got walking out in front of all friends, family and supporters in Arendal was unbelievable.

“I got 100% good feedback last time. It was the first professional boxing event in Arendal, and people tell me they got goosebumps when I entered the ring. Many people said it was the best and most professional show ever in Norway.

“It’s going to be an even bigger, better and more exciting show on March 2!”

An opponent for Havnaa will be confirmed shortly, but the son of Norway’s only ever male World Champion, Magne Havnaa, has been promised his toughest test as he looks to take his career to the next level.

“This is going to be the biggest test of my career. My promoter has promised me that,” he says. “I’m back in full training following my thumb injury and my shape is very good. I didn’t want a tune up fight. I feel that I’m at a much higher level now than I’ve ever been before, and I’m ready for a big fight.

“2019 is going to be my year! It’s time for me to take my boxing to a new level. I want to fight the best, and I want to become World Champion. I’m ready to step up, and that begins with this fight on March 2 in Arendal!”

Said promoter Nisse Sauerland: “We’re delighted to be returning to the SØR Amfi in Arendal. We will be announcing an opponent for Kai in the coming weeks, and fans will not be disappointed. Kai has done everything asked of him so far in his career, but now the time has come for him to step up. Home support will be important as he faces his toughest career test. Fans can also look forward to a full undercard showcasing the best of Norwegian boxing!”