Ceylan vs Sanchez, Thorlsund vs Graf this Saturday in Denmark 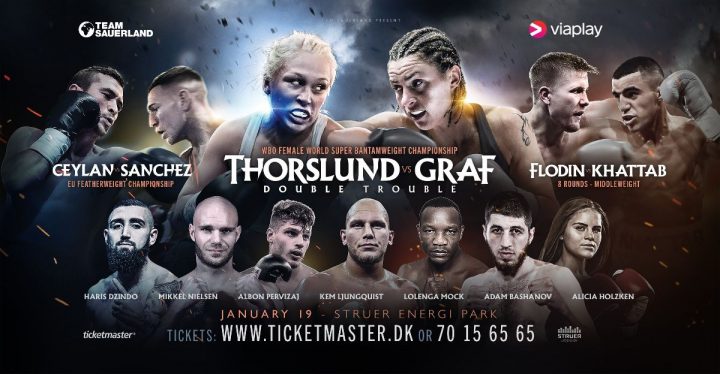 Ceylan will be looking to avenge his shock knockout loss to Sanchez at the same arena on March 10 as they contest the EU Featherweight crown on the undercard of Dina Thorslund’s WBO World title defence against Alesia Graf.

“One thing is for certain, I will give my everything in the ring, and that should be enough for me to win on Saturday. Most fighters are in trouble when I’m boxing at my best,” says the former European Champion from Aarhus.

“I’m expecting a tough fight. I know Jesus Sanchez will do everything possible to show it was not just a lucky punch last time, but if I don’t beat Sanchez, then I will lose heart and hope, and I might as well hang up my gloves.”

Despite offering this career ultimatum, Ceylan is confident of victory, even if this means going against his instincts, and knows he must beat Sanchez to get the big fight he craves, including a rematch with IBF Champion Josh Warrington.

“I will need to patient, at least that’s the tactics, but patience, to be honest, is not exactly my strong suit,” he says. “I’m an eager beaver, and it can quickly become unbearable for me when nothing is happening in a fight, and I would rather give the fans some action for their money.

“However, the most important thing is that I get revenge against Sanchez so I can move forward with my career. I believe one hundred percent that I have a future, and that I’m not finished at all. I have my eyes on some of the big boys, such as Josh Warrington, who I would like to smash, but I have to earn it, and my dreams can only become a reality, if I get a victory on Saturday.”

Handball Star: “Dina Thorslund Is Made Of Something Special”

Hylleberg is from Struer, like Thorslund, and has been following the boxer’s career closely as both women look to dominate their chosen sports.

“I saw Dina’s last fight in Struer, when she became World Champion, and it was just unbelievable to be a part of,” says Hylleberg.

“It was a great experience to see the whole set up for a fight. In some ways, it is difficult to relate to as a handball player, but ultimately it’s all about winning.

“It’s just fascinating to follow Dina. She only has herself up there in the ring. She has no teammates to lean on, and on daily basis, she must motivate herself to train hard. That requires a very special mentality.”

Ahead of her World title clash with Graf, Thorslund joined Hylleberg, her TTH teammates and their coach Pether Krautmeyer for a special training session.

“It was really fun and hard in a way we are not used to, because there was a lot of endurance training,” said Hylleberg. “It was cool to get some variation in our training, though I must admit, I had a sore body the next day.”

Thorslund says she was impressed with the players’ efforts during the training.

“Mathilde and the rest of the girls have a very good approach,” she said. “They did exactly what they told, which was nice to see. You could tell that they weren’t used to doing some of the exercises, but it wouldn’t be fun if they were. They were under pressure when the new exercises came, but in general their shape was really good. Normal people would not have managed this training!”

On Saturday, it gets serious for Thorslund (12-0, 6 KOs), when she meets Germany’s Alesia Graf (29-7, 13 KOs) in a WBO World title defence, but the local hero can rest assured, that even though the job must be done alone, there will be a whole handball team and a jam-packed arena to support her efforts.

Kem Ljungquist (6-0, 4 KOs) must face a new test as he returns to the ring on Saturday, January 19 at the Struer Energi Park on the undercard of Dina Thorslund’s WBO World Super Bantamweight title defence against Alesia Graf.

The Danish heavyweight hope will now meet undefeated Boldizsar Balazs Czagler (2-0, 2 KOs) following the withdrawal of his scheduled opponent Dominik Musil, who has been ruled out after breaking his nose in sparring.

“These things happen in boxing,” says Ljungquist. “I have no problem preparing for a new opponent. I’ll be ready. He is unbeaten now, but not after Saturday!”

The 28 year-old was last in action at the King Abdullah Sports City in Jeddah, where he recorded a second-round stoppage win over Egypt’s Mourad Omar.

In preparation for his seventh professional bout, Ljungquist has been in Berlin sparring top German heavyweight Albon Pervizaj, who also fights in Struer.

“I had some really good sparring with Albon,” he says. “We did many rounds together, and his coach Ulli Wegner told me I was big a talent. He also pointed out some things I need to work on, but it would be strange if I was perfect at this stage of my career, and it’s nice to get praise from such a big name.

“I’ve had great preparations for this fight in general, so I’m really looking forward to giving the fans in Struer a good performance on Saturday night!”

Boxing » Press News » Ceylan vs Sanchez, Thorlsund vs Graf this Saturday in Denmark