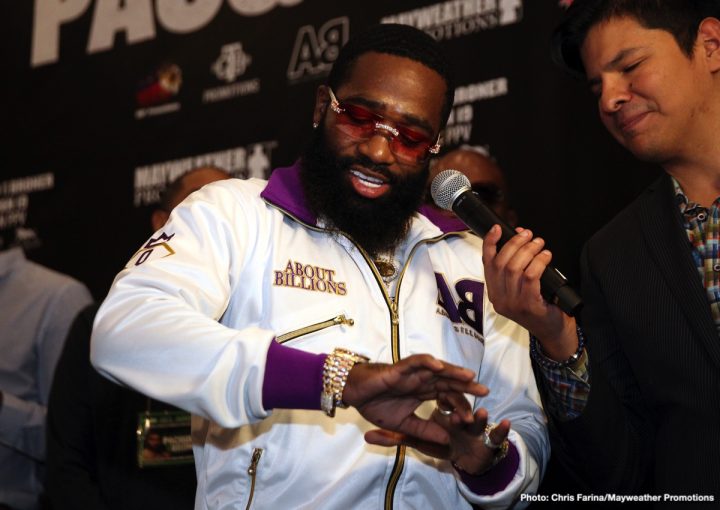 By Mike Smith: Roy Jones Jr. says Adrien Broner (33-3-1, 24 KOs) has a very good chance of beating Manny Pacquiao (60-7-2, 39 KOs) this Saturday night because he has a fighting style that is very similar to Floyd Mayweather Jr. Former four division world champion Jones points out that Mayweather beat Pacquiao with ease four years ago in 2015, so he thinks that Broner, 29, has an excellent chance of doing the same thing to the Filipino star because of how similar his fighting style is with Floyd.

“Of course he [Pacquio] does [have more of a chance of beating the younger 29-year-old Broner] because of his knowledge,” Jones said to Fighthype about Pacquiao. “It’s not how old you are. It’s how you apply it.”

Broner does fight a lot like Mayweather. He uses the shoulder roll, throws beautiful pot shots, moves his upper body the way he does, and and picks off shots in the same manner. Broner just hasn’t been able to put it all together the way Mayweather did after he moved up to welterweight.

Pacquiao will defend his WBA ‘regular’ welterweight title this Saturday night against former 4 division world champion Broner on January 19 on SHOWTIME PPV at the MGM Grand in Las Vegas, Nevada. A large crowd is expected to be at ringside on Saturday. The fight will give the boxing world a chance to see how much Pacquiao has left in the tank. It will also let them see whether he can still bring in a lot of PPV buys. In the past, Pacquiao was able to bring in massive PPV numbers against almost everyone he fought during his prime. It didn’t matter who his promoters at Top Rank put in the ring with him. Pacquiao would still do great numbers.

It was only after Pacquiao lost to Floyd Mayweather Jr. in 2015, that his pay-per-view numbers dropped off. You can argue that the stale match-making done by Top Rank didn’t help Pacquiao. After Pacquiao’s loss to Mayweather, his promoters at Top Rank matched him against Jessie Vargas, Tim Bradley [for a third fight] and Jeff Horn. Those were not fights that Pacquiao needed for him to redeem himself after his loss to Mayweather. Having Pacquiao fight one of those guys would have been acceptable, but not all three of them in a row. It was clearly a mistake on Top Rank’s part, and that might be one reason why Pacquiao’s PPV buys dropped off the side of a cliff after he lost to Mayweather. The match-making was poor.

Broner was a superb fighter at super featherweight and lightweight. But making the move up to 147, it’s not been an easy transition for him the way it was for Mayweather. The obvious things that Broner lacks that Mayweather had is fast hands and quick reflexes. Broner’s shots aren’t as blindingly fast as Mayweather, and he doesn’t get out of the way of shots in the same manner.

Pacquiao has the experience to beat Broner, because he’s been in inside the ring a lot longer against consistently better opposition. Pacquiao, 40, has had time to digest

“Broner is a good fighter too. Broner needs to prove himself with Pacquiao,” Jones said. “This is a good opportunity for him because he can prove himself.”

Broner needs to prove himself to the boxing fans, as many of them have given up on him after seeing him struggle against Jessie Vargas, Mikey Garcia, Adrian Granado, Shawn Porter, Marcos Maidana and Paulie Malignaggi. Broner has to show that he belongs at 147, because right now, he doesn’t. He looks like a blown up super featherweight without the punching power to compete at welterweight or even at light welterweight.