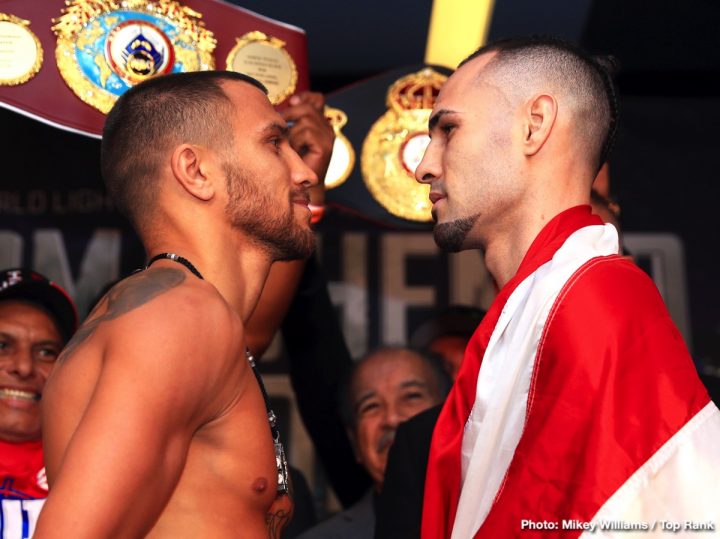 By Chris Williams: Vasiliy Lomachenko (11-1, 9 KOs) weighed in at 134.4 lbs on Friday for his title defense of his WBA lightweight title against former IBF super featherweight champion Jose Pedraza (25-1, 12 KOs) this Saturday night on ESPN on December 8 at Madison Square Garden in New York. Watch the undercard live on ESPN+ – Pedraza weighed in at 134.2 lbs.

This fight is expected to be a real mismatch. Even Lomachenko is outright hinting at the direction of the fight by saying that Pedraza reminds him of Miguel Marriaga. That’s a crazy comment, as Pedraza is a pure boxer, and fights nothing like the slugger Marriaga. Lomachenko had an easy time stopping the slow, hittable Marriaga in the 7th round last year in August. However, Marriaga was coming off of a grueling 12 round unanimous decision loss to Oscar Valdez in his previous fight in April. Coming back so soon just four months later to fight Lomachenko had to have been a difficult thing for Marriaga to do. 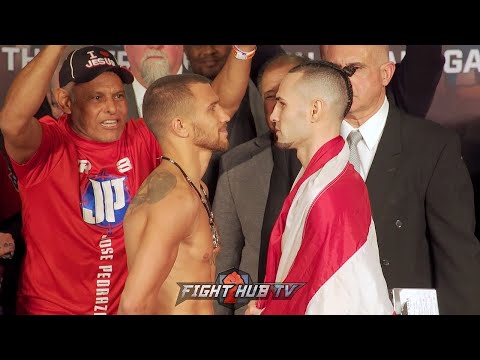 “His style is not very interesting and not comfortable for all boxers because he’s always on defense and waiting for a mistake,” Lomachenko said in complaining about Pedraza’s fighting style. “If you’ve seen my fights, it will be similar to the {Miguel} Marriaga fight. They have the same style.”

Lomachenko might be just talking from the top of his head without remembering who he’s referring to. Marriaga is the complete opposite type of fighter than Pedraza. The fact that Lomachenko seemingly can’t tell the differece between those two fighters’ styles is worrisome. It suggests that he’s not fully aware of the type of fighter he’s going to be facing on Saturday.

This is an important fight for Lomachenko, because he wants to unify the lightweight division by beating all the champions. If Lomachenko beats Pedraza to win the World Boxing Organization belt, he would only need to defeat the eventual winner of the IBF title, which was recently vacated by Mikey Garcia and then go after him to pick up the WBC title. Lomachenko would then own all four belts. Lomachenko took criticism from boxing fans for leaving the super featherweight division without unifying it by facing the likes of Alberto Machado, Miguel Berchelt, Gervonta ‘Tank’ Davis and Tevin Farmer.

“In my weight class and closer to my weight class, we don’t have a big superstar,” Lomachenko said. “Yes, we have big names at 147, but I can’t move up to 147 now because it’s too much {weight}, I think.”

Pedraza looked good in his last fight in beating Raymundo Beltran by a 12 round unanimous decision last August. Pedraza had too much boxing skills, youth and mobility for Beltran. That was the perfect opponent for Pedraza. In Pedraza’s other important wins, he defeated Stephen Smith by a 12 round unanimous decision in April 2015. Pedraza also has wins over Edner Cherry, Andrey Klimov, Tevin Farmer, Michael Farenas, Antonio Moran and Beltran. Pedraza is a very good fighter. His only loss of his career is a 7th round knockout against Gervonta ‘Tank’ Davis last year in January 2017.

It would be nice if Lomachenko would give up on the lightweight division, and move up to 140 so that he could go after some interesting names like Regis Prograis, Jose Ramirez, Ivan Baranchyk, Josh Taylor and Maurice Hooker. That would show some real courage on Lomachenko’s part if he were to move up in weight instead of just talking about it. The way that Lomachenko is seemingly so reluctant to move up to 147, it’s likely he won’t want to move up to 140 either. There’s a lot of lions at light welterweight that would make it hard for Lomachenko to exist in that weight class.

In other weights on the card, WBO super bantamweight champion Isaac Dogboe (20-0, 14 KOs) weighed in at 120.8 lbs. for his title defense against #2 WBO Emanuel Navarrete (25-1, 22 KOs). Navarrete, 23, weighed in at 122 lbs. Navarrete initially was too heavy when he stood on the scales, but he then stripped and was able to barely make the weight. 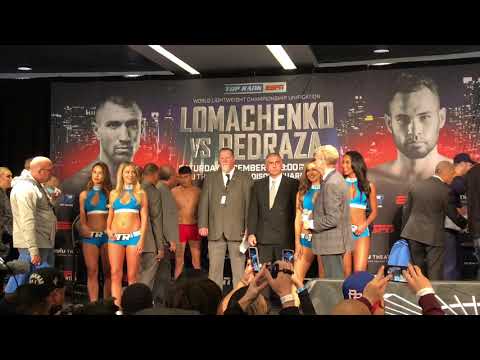 Dogboe, 24, is looking hard to beat right now with his recent wins over Jessie Magdaleno, Cesar Juarez and Hidenori Otake. Dogboe defeated Magdaleno by an 11th round knockout last April to win the WBO 122 lb title. In Dogboe’s first defense, he stopped Otake in the 1st round last August. The fight wasn’t even competitive. The boxing public wants to see a rematch between Dogboe and Magdaleno. However, that contest will likely result in another win for Dogboe, as he’s got too good of an engine for Magdaleno.

Dogboe doesn’t have the same size and power as Magdaleno, but his stamina is clearly much better. The likely reason for that is all the weight that Magdaleno needs to take off for him to make weight for the super bantamweight division. He’s a big guy for the weight class and he probably should have moved up to lightweight a long time ago. It’s understandable why Magdaleno is resisting going up in weight. At super bantamweight, he’s a lot more effective than he’d be at lightweight without his big weight advantage that he’s accustomed to having.

Navarrete has a 20 fight winning streak going for him that extends an incredible six years to 2012. The last and only time Navarrete has lost a fight during his first years as a pro in April 2012 in losing a four round decision to Daniel Argueta. Since that fight, Navarrete has shown a lot of improvement in beating everyone he’s faced over a six year period. 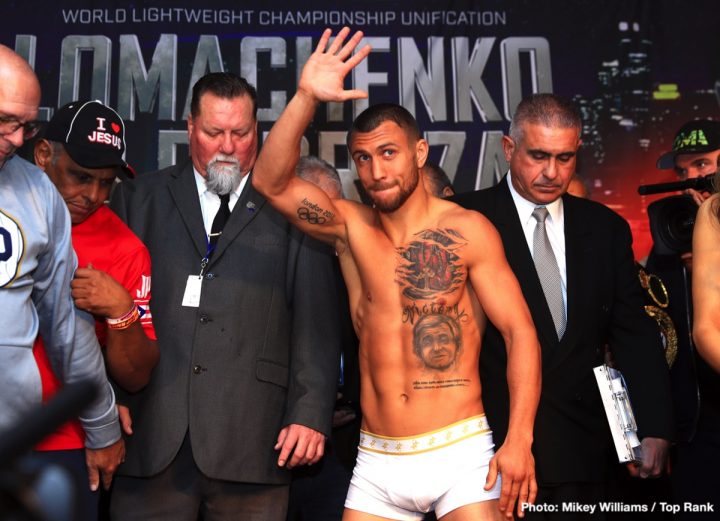 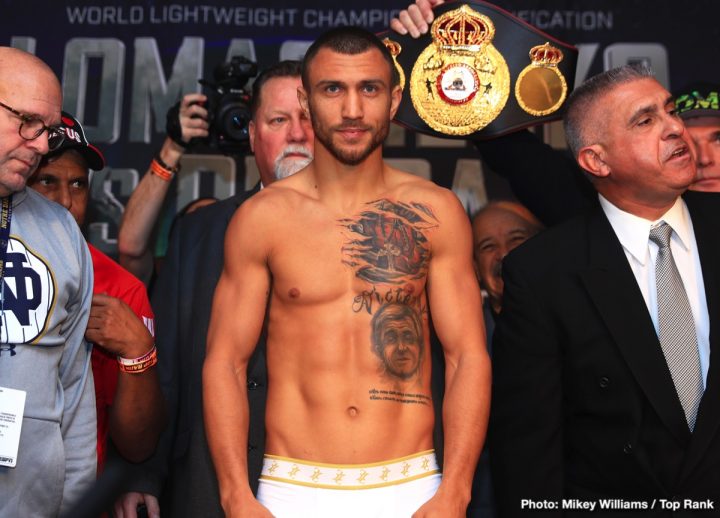 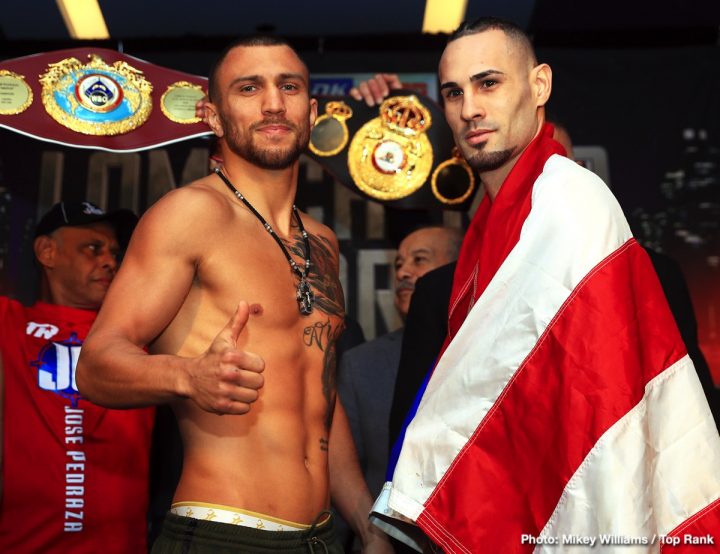 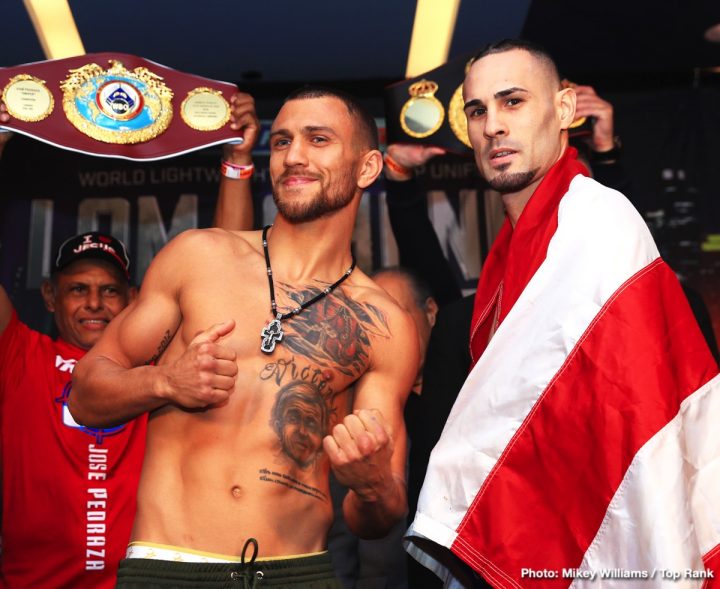 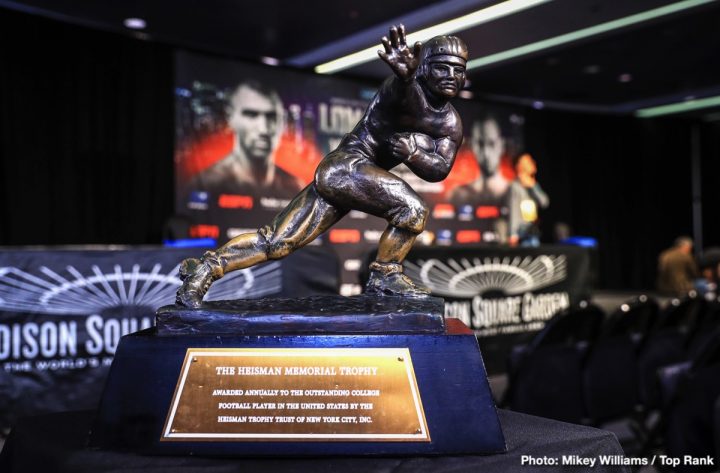 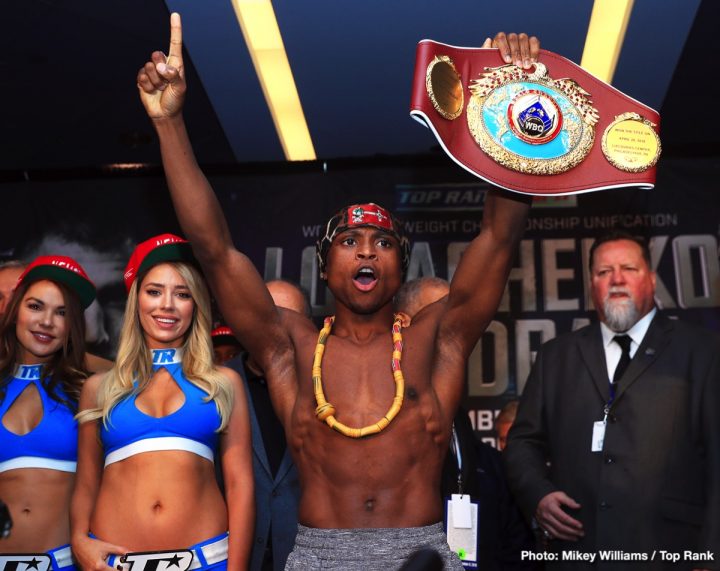 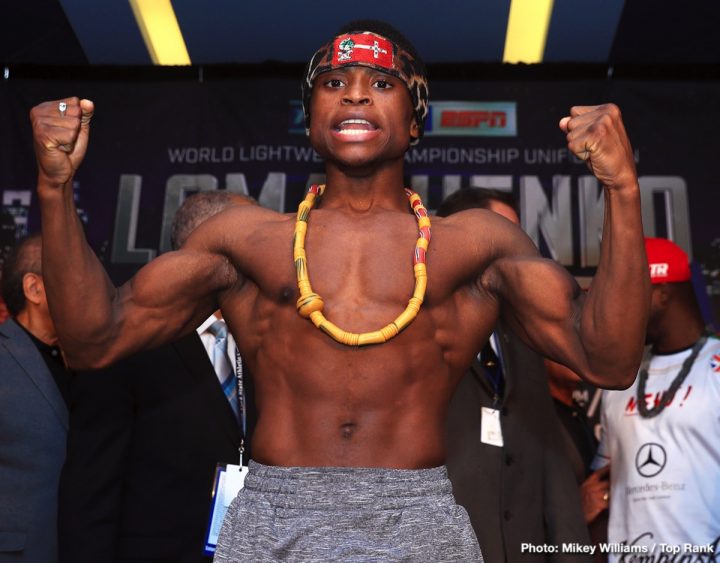 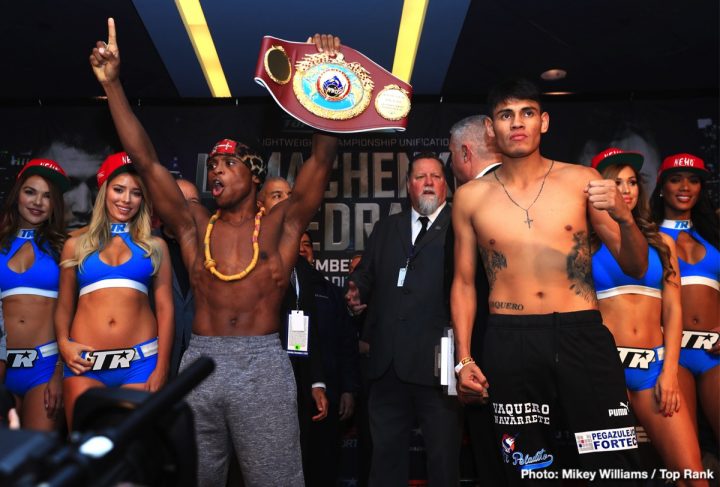 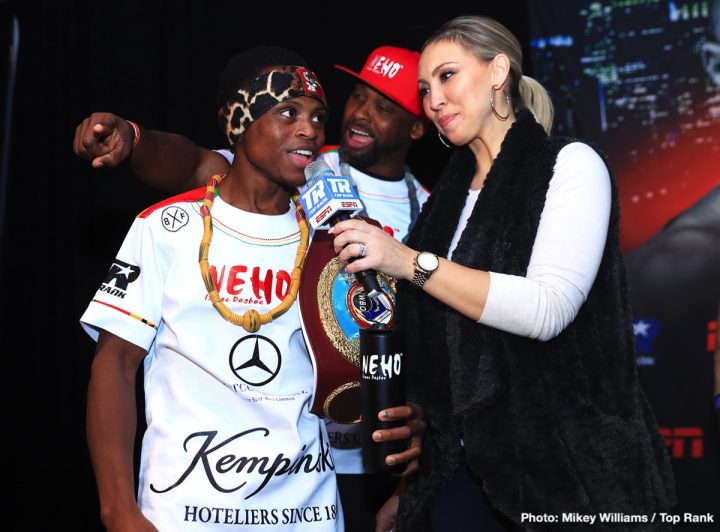 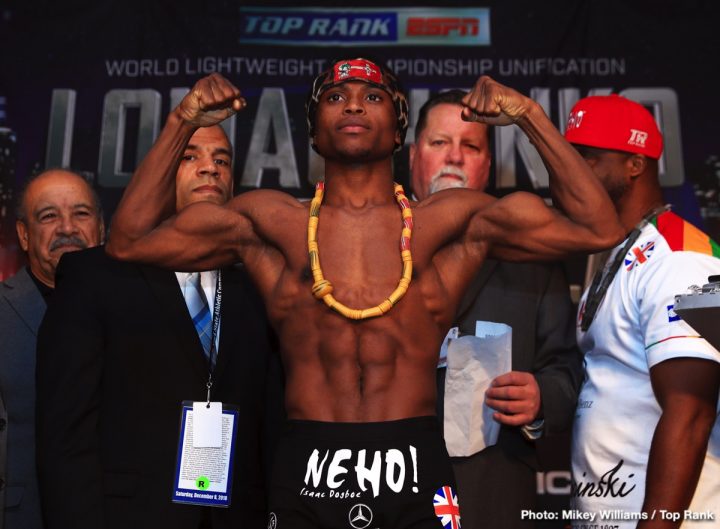 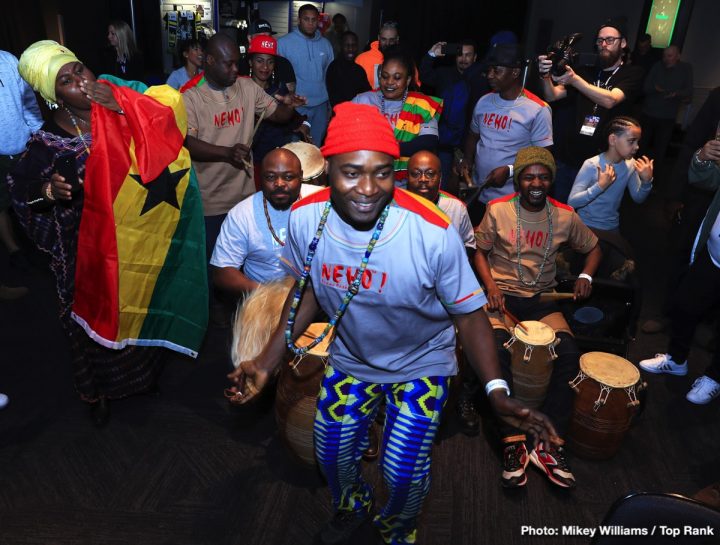 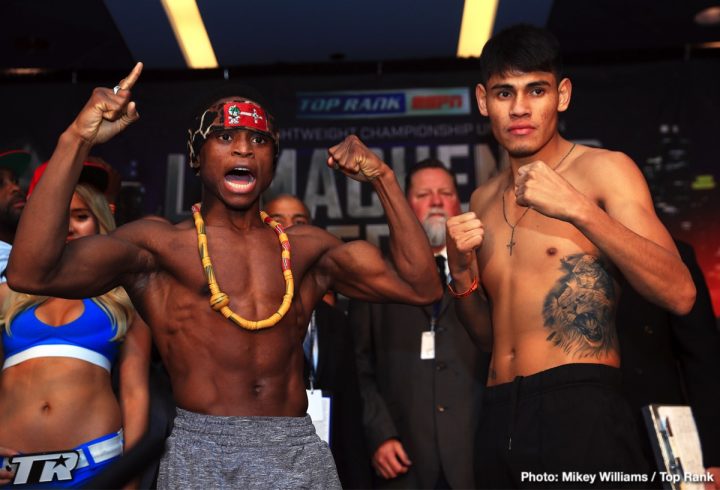 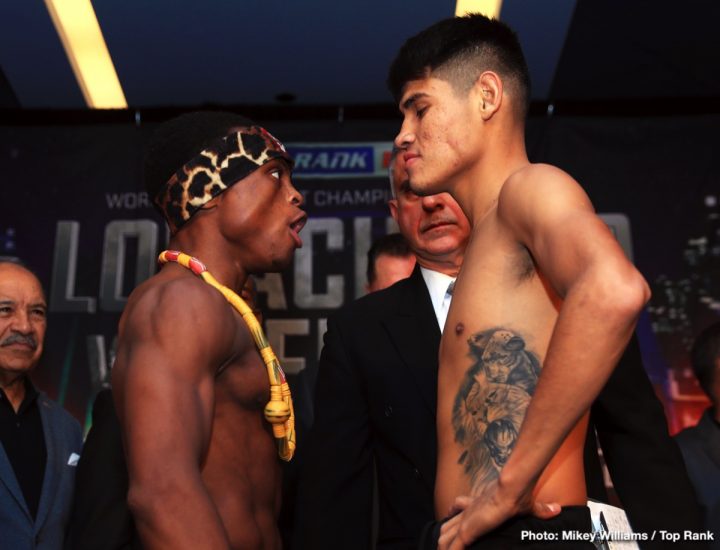