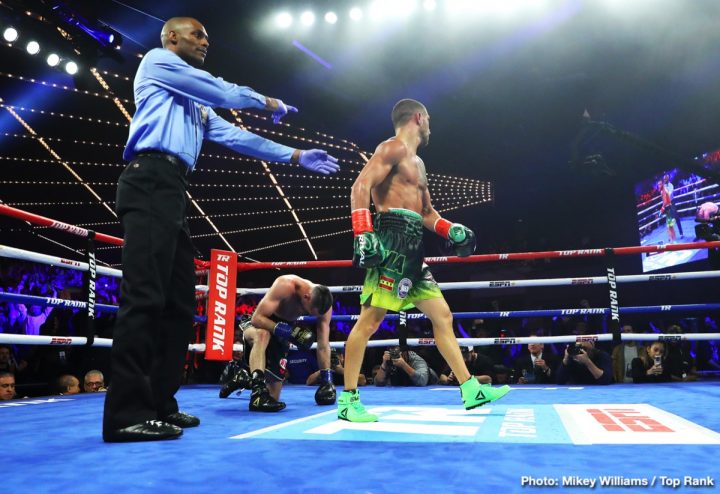 · More than 2 million viewers tuned in for Lomachenko vs. Pedraza

Saturday’s Top Rank on ESPN scored several major victories aside from Vasily Lomachenko (12-1, 9 KOs) defeating Jose Pedraza (25-2, 12 KOs), with the overall Top Rank telecast across ESPN and ESPN Deportes averaging 1,980,000 viewers, up six percent from the same window last year. On ESPN only, the telecast averaged 1,865,000 viewers, making it the second most-viewed boxing telecast across broadcast and cable in 2018, behind ESPN’s Crawford vs. Benavidez Jr. telecast in October. Overall, Top Rank on ESPN has aired the top two and three of the top five boxing telecasts of 2018.

· The Lomachenko vs. Pedraza fight from approximately 11:39 p.m. to 12:26 a.m. ET averaged 2,013,000 viewers, making it the third most-viewed fight of the year behind both fights on the Crawford card.

· Saturday’s telecast, including the co-main of Emanuel Navarrete vs Isaac Dogboe was the second most-viewed telecast of the day on cable among males 18-34, 18-49 and 25-54, and people 18-34 (behind ESPN’s Heisman Trophy Ceremony).

Next up on Top Rank on ESPN is WBO super middleweight world champion Gilberto “Zurdo” Ramirez (38-0, 25 KOs) defending his title against Jesse “Hollywood” Hart (25-1, 21 KOs) in a highly anticipated rematch Friday, December 14, at the American Bank Center in Corpus Christi, Texas. The entire event, including the undercard, will begin at 6:30 p.m. ET, will stream on ESPN+ — the new multi-sport, direct-to-consumer subscription streaming service from The Walt Disney Company’s Direct-to-Consumer & International segment in conjunction with ESPN.