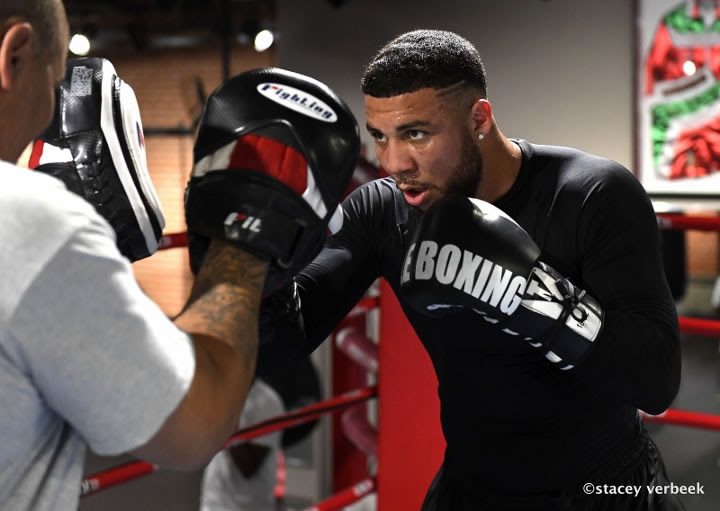 Uprising Promotions looks to close out the year in significant fashion on Saturday, as Samuel “Main Event” Clarkson (21-4, 14 KOs) takes on Ryad Merhy (26-1, 21 KOs) at the Spiroudome Arena in Charleroi, Belgium. Hardware will be on the line in the contest, as Clarkson looks to bring home the WBA International Cruiserweight Title.

“I truly feel amazing right now,” Clarkson said after today’s weigh-in. “We had an incredible camp for this fight. We did a lot of running, lifting weights and had some great sparring. Overall, I am really excited to show the world what’s up and let them know that the Bivol fight will not define me. My life has been refocused on God, and I am letting Him handle everything now. We are going to do whatever it takes on Saturday to make sure this belt comes back with us to Texas.”

Clarkson has recorded two consecutive stoppage wins since a small setback in a ShoBox main event against Dmitry Bivol in 2017, which ended a nine-fight winning streak. Relatively unknown when Clarkson stepped up to fight him, Bivol has since won the WBA Light Heavyweight Title and successfully defended it three times.

“We are really excited for this opportunity,” said Samuel Clarkson, Sr., who is the head trainer for his son. “A win on Saturday puts us right back where we want to be, and we have been striving to get onto this stage again ever since we fought Bivol. We had an outstanding camp for this fight, and now it is finally time for us to put all of that work into action.”

Clarkson, 28, is a man who has always been willing to take on any opponent, even if it means that he has to travel across the world to Belgium to do so. Throughout his career, he has also continually proven that counting him out is a bad decision. During his previous nine-bout winning streak from 2014 to 2017, he entered the ring as the “b-side” fighter and emerged victorious against the likes of former world title challenger Cedric Agnew (decision win), as well as then once-beatens Jerry Odom (TKO-3) and Lavarn Harvell (TKO-2) on ShoBox: The New Generation.

Boxing since age 13, the talented Ochoa (20-1, 7 KOs) is a Puerto Rican from Brooklyn. Despite having just seven career knockouts, the 26-year-old scored a spectacular 15-second KO over Engelberto Valenzuela and, in 2016, was nominated for Knockout of the Year for his one-punch KO 8 of Luis Joel Gonzalez.

“I can adapt to anything. I’m very unpredictable,” said Ochoa. “I can box and win easily, or I can hit you with one shot and take you out.”

Ochoa says he’s happy to have his career back on track and looking forward to the future with Cohen.

“It’s a blessing. I’m very focused and determined. I stay in the gym because I love boxing. I saw Greg Cohen’s resume and what’s he’s done in the sport and I know this is a great opportunity for me. This is the guy who’s going to make me a millionaire and world champion.”

Moreno (7-0, 6 KOs) is power puncher who comes forward behind lots of movement. Originally from Mexico City, he is now also living in Brooklyn. The 25-year-old went 54-5 as an amateur and was the 2004 Junior Olympic Champion, the 2011 Golden Gloves NY Champion and the 2012 Golden Gloves NY Runner-Up.

“I’m excited to make it happen,” said Moreno of the signing. “I’m looking forward to getting on the road toward the world championship. The plan I have is to have 10 more fights to get the experience in, because so far most of my fights have ended in the first round. So I say in a year or two we’ll be looking to step up and fight for titles.”

Both fighters are managed and trained by Kelly Rich at GymU Boxing (in Association GGE Fitness Studio) in Williamsburg, Brooklyn. Rich has had Ochoa since childhood and has been working with Moreno for the past four years.

Rich says he trusts Cohen to do the right things with his fighters.

“Greg is an exciting person and he motivates you and get the job done,” said Rich. “He’s a top promoter affiliated with all the other premier boxing companies. We are good friends and I can personally trust him. We’ve always been on the up-and-up.”

Promoter Cohen, on a hot streak of late with the “out of nowhere” success of heavyweight contender Jarrell Miller and world middleweight champion Robert Brant, says he’s happy to be adding this one-two punch of prospects from New York.

“Both these fighters have a wealth of talent,” said Cohen. “I will be looking to continue their strong development and advancement against increasing competition in the next couple years. Both fighters have the talent it takes to make it and with hard work and determination, it is very possible. I credit Kelly Rich for the work he’s done with them.”