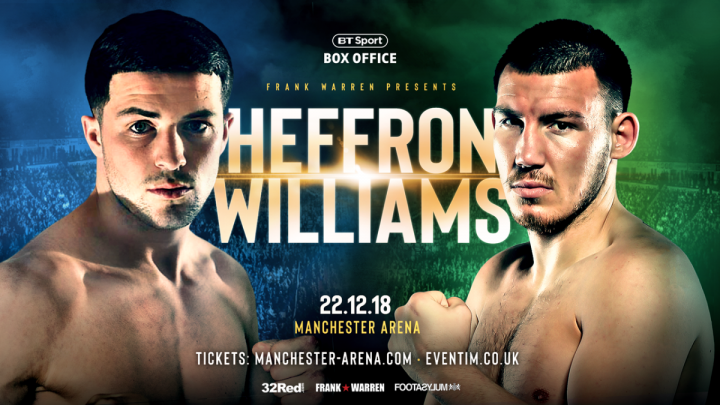 Liam Williams plans to beat Mark Heffron to the British middleweight title but is open to an immediate return to 154lbs.

The Welshman (18-2-1-KO13) faces the unbeaten Heffron on a colossal Josh Warrington vs. Carl Frampton card at Manchester Arena – live on BT Sport on Saturday night.

Having already won British, Commonwealth and European titles as well as challenged for an interim world crown at 154lbs, Williams is keeping his options open.

Williams said ahead of facing Heffron: “It depends what’s offered whether I stay at middleweight. I can still make light-middle and after I win this fight, unless I’m offered something great, I’ll be going back down.

“I think I can outbox and outfight Heffron. It depends what he comes with but I’ll have Plan A and Plan B. I can adjust. I don’t want to be disrespectful but I think it’ll be similar to the fight with his brother, who I beat.

“I fought a light-heavyweight last time out and had no problem. I’ve always been a strong boy. At one point as an amateur, I fought up at 81kg. That’s two stone heavier than what I weight at light-middle.

“The strength and the power is there. Heffron isn’t going to be stronger than me and he won’t hit harder than me. He won’t be outmuscling me.

“I’ve got respect for Mark. We’ve spoken quite a few times on social media and he seems a good guy. We both fight for our families. We just want to make everybody proud and earn good money. Good luck to him. I hope he trains hard.”

LIAM WILLIAMS IS in full agreement with the thinking that jumping up a weight to take on a knockout artist who nobody else fancied fighting is the sort of challenge that presses his buttons.

It is match-up that has got fight fans licking their lips in anticipation and the prospect of trading leather with the destructive Heffron – 17KOs from his 21 unbeaten professional fights – is something that stirs the juices of the 26-year-old from the South Wales Valleys.

“Yes! Definitely, it is exciting and as soon as the fight was offered to me, for all of ten seconds, I wondered if he was too big for me,” recalled the 18-2-1 Williams, whose only defeats came against former world champion Liam Smith in an epic double-header.

“He has come down from super middle and then I thought ‘no he isn’t’ because on fight night I am very big for the weight and in all honesty when I stood in front of him I felt I was the bigger man.

“Whether it looked that way to others, I don’t know, but looking at him I thought I was stronger.”

While Williams will insist size doesn’t matter when it comes to jumping up a division, the fact is he is happy to roll the dice and gamble anyway because he is past the point of self-preservation or looking to pad a record

“I couldn’t care less,” he pointed out. “I don’t want to lose and I really don’t think I’m going to lose, but I’m not protecting nothing. I took those Smith fights quite early on compared to what people thought I would.

“It was never a massive thing for me, protecting an unbeaten record. It looks good on paper but, when you get in there with someone who is a real fighter, it is going to show anyway. So you might as well throw yourself in and be in a couple of tough fights before pushing onto the next level.”

Williams, meanwhile, confessed that affording himself some extra poundage is an option that has crossed his mind in the past when he has been striving hard to make super welterweight.

“I had thoughts. I didn’t need to because I can make the weight, but it is a struggle and anyone who looks at me will know it is hard to make light middle. It is do-able as long as I do it the right way and in a healthy way.

“So I wasn’t really thinking about it, but this offer made sense really and why wouldn’t I take it?” he questioned, before admitting that, should he be successful, there will a temptation to stick at 160lbs.

“Yeah it will be difficult to resist but it is about what is offered to me and I feel like I want to push on now. I didn’t really want to fight for the British title, with all respect to the title and I love it, but I planned on moving forward to a European title or fringe world level opponents to get myself into the mix.

“Then this was offered to me and it is a great fight. Mark is a good fighter, take nothing away from him, so it makes perfect sense. It is going to be a quality fight.”

« Buatsi vs. Quinlan on Dillian Whyte vs. Derek Chisora 2 undercard

Tommy Fury Ready To Rock in Manchester on Warrington vs. Frampton undercard »