Kai Robin Havnaa back in action on March 2 in Arendal, Norway 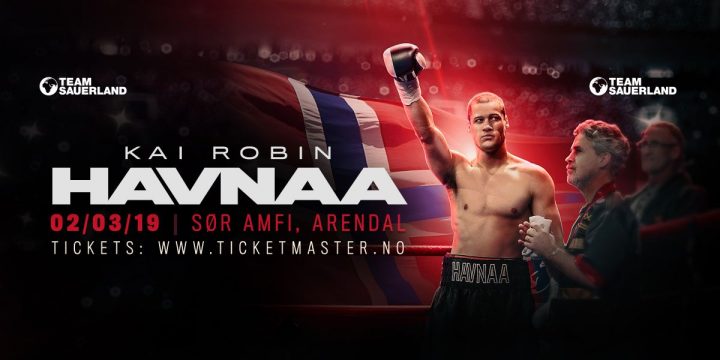 ‘King Kai’ is back at the SØR Amfi having blasted out Daniel Vencl inside two-rounds on February 3. A performance he followed with the show reel second-round stoppage of Frank Bluemle at the Baden Arena in Offenburg on April 28.

Havnaa must now face a significant step up as he looks to advance his promising career with a ten-round contest against the former WBU Cruiserweight Champion and WBO European Heavyweight title challenger.

“I will need to be in my greatest shape ever,” said Havnaa. “Rashid fought for the WBO European Heavyweight title in March, so I know he is going to be big, probably bigger than me, and I’ll have to be at my best to beat him.

“He’s a strong opponent. He’s experienced and looks solid. I’m expecting him to come with an ‘all in’ mentality, but with that said, you never know what you’re dealing until you start trading punches, so I’ll be prepared for everything.”

Rashid, from Frankfurt, Germany, is known as ‘Thunder’ due to his punching power, which has seen him claim 13 of his 16 wins inside the distance.

“I’m not worried about his power, but I will be aware of it,” says Havnaa. “When you’re a big cruiserweight, all punches are dangerous, but I trust my defence. I’ve been working on it a lot, and that’s why I’ve never been down in my fights.”

Havnaa will once again be counting on his fans to turn the SØR Amfi into a hometown fortress, as the 29 year-old admits he feels unbeatable in Arendal.

“I have the feeling nothing can stop me now, especially not at the SØR Amfi!

“The support I got from people in the arena last time gave me more energy and power than I ever thought possible,” he says. “I get motivated just thinking about it, and that’s priceless when you’re preparing for war. My win will be shared with everyone who’s there supporting me on March 2!”

Promoter Nisse Sauerland says this fight marks the ‘first big step up’ for Havnaa, and will provide an important acid test for the Norwegian talent.

“Kai has done everything asked of him so far in his career,” said Sauerland. “Since his professional debut, we’ve been gradually increasing the level of opposition, but this fight marks his first big step up. He will need to prove himself at this level if he wants to continue to progress. He has the talent and determination to go a long way, but now, he has to back it up in the ring!”

Hadi Srour (2-0, KOs) returns to the professional ring on March 2 at the SØR Amfi in Arendal to face Zoltan Szabo (25-15, 11 KOs) on the undercard of Kai Robin Havnaa’s cruiserweight showdown with Rad ‘Thunder’ Rashid.

Srour is one of Norway’s most exciting boxing prospects with over 100 amateur wins to his name, and has successfully transitioned to the professional ranks with stoppage victories over Michael Mooney and Artur Zemlianyi.

Despite his opponent’s pedigree, the 23 year-old Srour says he is confident in his ability and plans to continue his one hundred percent stoppage streak, even going so far as to predict in which round he will end the fight.

“I’m looking forward to fighting in Arendal and performing in front of a packed out crowd at the SØR Amfi on March 2,” said Srour.

“Since my last professional fight, I’ve been to three international tournaments in Turkey, Finland and Serbia. I’ve boxed nine fights against top boxers and won seven of those. I’ve also knocked out two boxers in these tournaments, which shows how my style has changed since turning professional.

“I’ll be coming into this fight in my best shape ever, so expect fireworks. I started my training camp sparring IBF Youth World Champion Enock Poulsen, and next week, I’m starting an international training camp with some of the best boxers in the world, so I couldn’t ask for better preparations.

“Szabo is a huge step up for me, but everyone loves a gamble, and I trust my skill set, so let’s go. I like to take my time in the ring so I can showcase my skills. I will play with him for five rounds, then shut him down in the sixth. Get your tickets now and buckle up because it’s going to be a wild ride!”

Anders Eggan (3-0, 1 KO) will face Frane Radnic (11-11, 10 KOs) on the undercard of Kai Robin Havnaa’s hometown cruiserweight showdown with Rad ‘Thunder’ Rashid on March 2 at the SØR Amfi in Arendal.

Eggan is a former Norwegian national and Nordic junior amateur champion, who has also competed at both World and European Amateur Championships.

Having made his professional debut on October 21, 2017, with a unanimous points win over Lewis van Poetsch in Stokke, the 23 year-old has gone on to claim victories over Dumitru Nicu Manea in La Nucia, Spain and Maksym Onyshchenko at the Kolstad Arena in his hometown of Trondheim

“I’m really excited for this fight. I feel really good, and I love to fight in front of a Norwegian crowd. I’ve heard that the people in Arendal make a lot of noise, so I want to bring an exciting fight with high entertainment value,” says Eggan ahead of his six-round clash with Croatia’s Frane Radnic.

“I respect every opponent, but all my focus is on me. I can’t do anything about my opponents, so I don’t waste my thoughts on them. I will need to bring my A-game as I know Radnic is a good boxer. I’m looking forward to sharing the ring with him, and I hope we have a great and entertaining fight.”

Radnic has recorded ten of his eleven victories inside the distance, an impressive statistic, but not something Eggan admits to being worried about.

“It is what it is,” he says. “I’m used to fighting powerful boxers so I’m not worried. It’s all part of the game. I’ll bring my best boxing, and that’ll be enough.

“I plan to do a lot of physical training for this fight, so I can come in stronger than ever. I want to give the crowd power and technique combined! I also have a lot of different sparring partners that will help me with my preparations.

“I promise an entertaining fight. I like to entertain and I love to bring excitement. I’m not scared to take risks. I want to make boxing look pretty.”

Boxing is not Eggan’s only profession, and when out of the ring, he is equally comfortable in front of a camera working as a professional model.

“I like the combination of modelling and boxing,” he says. “Boxing is my main priority, and I love a good brawl, but as said, I want to make boxing look pretty!”

Kai Robin Havnaa will headline an action-packed show on March 2 at the SØR Amfi in Arendal. Tickets are available online via www.ticketmaster.no.