Joshua calls Whyte an “idiot,” says he’s not on his level 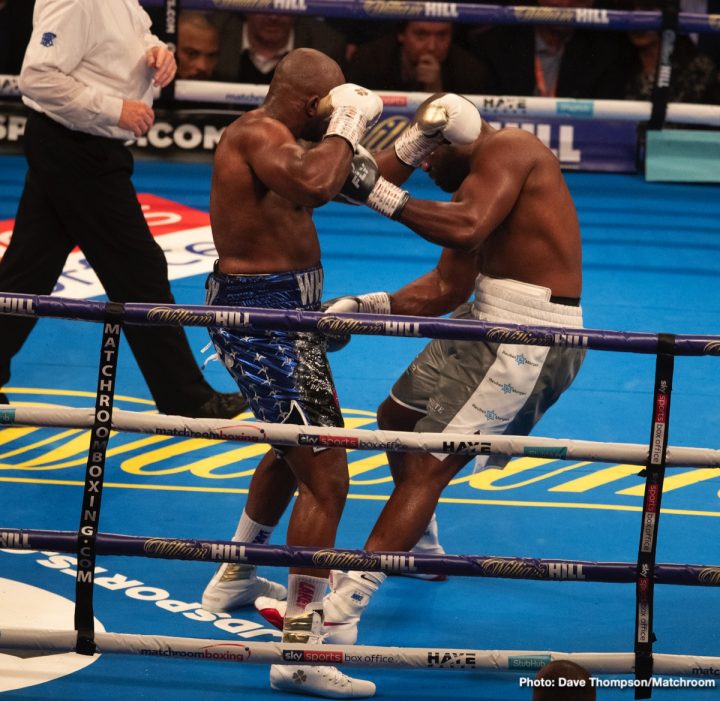 By Tim Royner: Anthony Joshua briefly showed a glimpse of anger on Saturday night after Dillian Whyte got in his face and started complaining about wanting a fight against him on April 13 after Dillian had dispatched Dereck Chisora in their rematch at the O2 Arena in London, England. Joshua said that Whyte is an “idiot” and that he’s on his level, and he’ going to get knocked out when they face each other. It seems pretty clear that Joshua will be fighting Whyte on April 13, given his and his promoter Eddie Hearn’s hard-line stance of not giving in to the purse demands from WBC heavyweight champion Deontay Wilder.

Joshua says he doesn’t want to receive criticism from the British boxing fans if he does what many of them want him to do in facing Whyte in a rematch. Joshua doesn’t want to hear the fans boo him and criticize him after he beats Whyte like he did three years ago in stopping him in the 7th round in 2015. In other words, the fans will be the one that deride if they truly want Joshua to fight Whyte again. But if they do, then they shouldn’t complain.

“You know what, Dillian is an idiot you know,” Joshua said to Whyte while being interviewed by Sky Box Office after the fight.

Joshua sounds like he wants Whyte to pipe down, and quit mouthing off, and begging for a fight that will happen in good time. They’re going to fight again, but the only question is when. Joshua wants to try and negotiate the fight with Deontay Wilder right now, since he’s got the entire world on his case. Whyte is bugging Joshua at the wrong time. It’s not Whyte that’s receiving the flak from the boxing world. It’s Joshua. It doesn’t hurt Whyte or Matchroom promoter Eddie Hearn’s popularity the longer Joshua delays the fight with Wilder. The only one that’s hurt is Joshua.

It was a mistake for Joshua to enter the ring after the Whyte vs. Chisora 2 fight on Saturday. If Joshua didn’t want to be royally hounded by Whyte, then he should have have stayed at home and watched the fight on television like a lot of boxing fans did. Without Joshua ready to commit to the Whyte fight on April 13, then he shouldn’t have been there. It’s a similar situation where Wilder was told he couldn’t enter the ring after one of Joshua’s recent fight. Joshua didn’t want Wilder inside the ring unless he had signed for the fight with him.Joshua showing up for the Whyte-Chisora 2 fight, and then entering the ring was always going to be interpreted by Whyte as AJ wanting to fight him next on April 13. Anyone would think that.

In explaining why he called Whyte an “idiot,” Joshua said, “You know why? I showed him some respect. I just told him straight ‘Dillian, I knocked you out clean when we fought, but let’s forget about that, because we’ve both developed, so let’s prove who is a better fighter now.”

There’s an argument to be made that Whyte doesn’t really believe he can beat Joshua, and that he just wants the big payday that comes with fighting him right now. The money that Whyte received three years ago for his fight with Joshua in 2015 is nowhere near the kind of loot that he can make right now if/when he fights him. We’re talking retirement money. We saw Tony Bellew and Carl Froch both retire after big paydays. The money that Whyte will get for a rematch with Joshua will make it well worth him likely getting knocked out by him, again. Whyte wants that second shot, and he’s going to keep badgering Joshua until he gets it. Joshua could trip Whyte up by vacating the belts where he’s highly ranked, and put him on ignore forever, but that would only be hurting himself, since he seems to believe the world title belts validate him for some reason. The reality is far different. The belts don’t mean anything when a fighter gets to a certain point in their careers where they’re well known to the casual and hardcore boxing fans. The belts actually hurt a fighter’s career, as they’re forced to fight a lot of less than popular fighters that the boxing fans don’t care about and have never heard of.

Whyte had a lot of problems against a fighter that is little more than a fringe contender in Dereck Chisora. A lot is being made about how well Whyte did in stopping Chisora in the 11th round, but we’re talking about a high level journeyman. There are better fighters in the heavyweight division than Chisora for Whyte to be fighting. Why he’s fighting Chisora is the big question. Whyte should be fighting the likes of Luis Ortiz, Kubrat Pulev, Joe Joyce, Adam Konwnacki, Alexander Povetkin and Tyson Fury. Whyte would likely lose to all of those fighters with the way he fought tonight.

“If Deontay Wilder ain’t serious, and he’s going to fight Tyson Fury and he doesn’t want to become undisputed, Dillian you’ll get a shot,” Joshua said.

Joshua is making the mistake of believing that Wilder shares the same fascination in collecting all the titles the heavyweight division like he’s trying to do. That’s NOT the way that Wilder appears to think. Wilder wants to fight the best in the division. Collecting titles is secondary. Deontay doesn’t seem to care about picking up trinket belts. Wilder already holds what many boxing fans consider to be the most prestigious of the world title belts with his WBC strap.

“He starts piping up, so I said ‘alright cool.’ I’m quite respectful, but if Dillian steps in the ring with me, trust me, you best believe me, none of these heavyweights are on my level,” Joshua said.

For Joshua to prove that none of the heavyweights are on the same level as him, he’s going to need to make sure they’re being offer a fair deal so that they’ll agree to fight him. The money that Hearn is offering Wilder isn’t agreeable to him and his management. If it was, then he would have signed for the fight ages ago.


« PHOTOS: Charlo vs Korobov; Harrison vs Charlo; Breazeale vs Negron