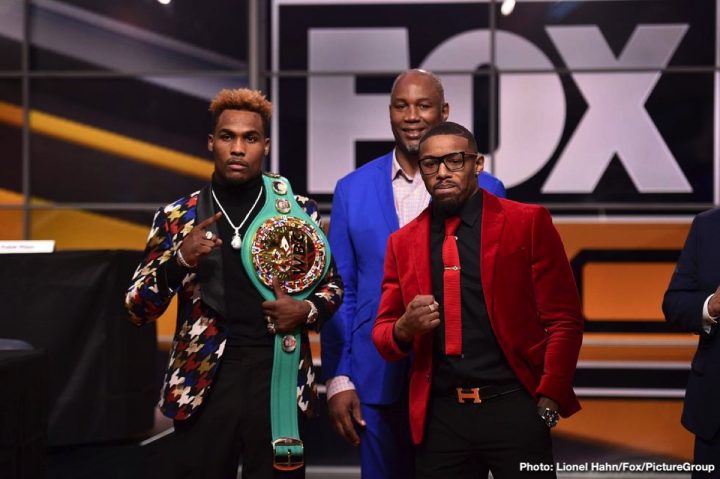 As the holiday season ramps up with Christmas just around the corner, twin champions Jermall and Jermell Charlo, plus Willie Monroe Jr. and Tony Harrison discussed their favorite holiday memories and traditions while preparing for their respective showdowns on Saturday, December 22 in Premier Boxing Champions on FOX and FOX Deportes action from Barclays Center, the home of BROOKLYN BOXING™.

The Charlo twins have intertwined holiday memories from growing up in Houston and not even Christmas could stop the legendary competitiveness of the twins.

“My biggest childhood memories from Christmas was that my brother and I would get bikes and then disassemble them to see who could put it back together better,” said Jermell. “We didn’t tighten up the bikes enough so they would fall apart and we would have to walk home. But we really wanted to see who was the better mechanic and who could put together the cooler bike.”

“My brother and I were definitely concerned about our toys on Christmas,” said Jermall. “We would have a big dinner with our whole family and it felt like everyone loved buying the twins gifts. It was always competition to see who had the better toys. I love that now I can give my kids that same feeling on Christmas morning.”

A native of Rochester, N.Y., Monroe’s family, which includes his pro boxer father who defeated Marvin Hagler, was close knit throughout Monroe’s childhood. Now he relishes the opportunity for his own family to be involved in those special times, even if he spends the weeks leading up to Christmas focused on his task December 22.

“I’m a family guy and the holidays have always been about togetherness for us,” said Monroe. “Gifts were just a small part of it. It was all about communing as a family. It was cool to have family during the holidays, and now that I’m older and have my own family, it’s a truly special affair.

“I understand that training through the holidays is for the greater good. I would rather miss a Christmas or two so that my family could have great Christmases for years and years after. I’m sacrificing to reach that goal for my family.”

Detroit’s Harrison has already spent part of his holiday season giving back, as he hosted a Holiday Toy and Grocery giveaway this past weekend that helped serve nearly 400 people in his community. After a grueling training camp, Harrison is hoping to bring home the ultimate Christmas gift for his family.

“The holidays in the Harrison household are a real family affair,” said Harrison. “It’s a time to get together, reconnect and do all the stuff we don’t normally get a chance to do. My family really does their thing in the kitchen and I can’t indulge like that, so I made sure I was out training in Colorado during Thanksgiving.

“This Christmas is going to be special. All I want is the best present of all, to beat Jermell Charlo on December 22 and bring that belt home to my two-year-old son Tony Jr., and four-month-old daughter Jaia.”

Detroit-native and super welterweight contender Tony Harrison spent this past Saturday spreading holiday cheer and giving back to his hometown as he hosted a Holiday Toy and Grocery Giveaway for the third year in a row to serve the Detroit community.

Harrison is nearing his world title challenge against Jermell Charlo that is part ofPremier Boxing Champions on FOX & FOX Deportes Saturday, December 22 from Barclays Center, the home of BROOKLYN BOXING™.

“This year’s event was a huge success,” said Harrison. “It just keeps getting bigger each and every year. It brings me joy to be able to contribute something to people that need our help so badly.”

Born and raised in the city, Harrison used to train in Emanuel Steward’s famed Kronk Gym and was even managed by the boxing legend early in his career. Harrison has worked hard to instill the positive messages that he gleaned from Steward and to make himself part of the fabric of the boxing hotbed.

“I’m a product of Detroit, both the good and the bad,” said Harrison. “I know how hard it is out here and what these people are going through. I know what kind of help they need and I think it’s important that they know someone from their backyard is here to fight for them.”

Harrison held the event at his Superbad Fitness Gym and helped distribute toys and groceries for nearly 400 people throughout the morning and afternoon.

“There was one particular woman on Saturday who got very emotional and just poured out so much praise for the giveaway,” said Harrison. “She was so grateful and that really touched me and highlighted the importance of this whole event for me. You could tell she was a prime example of the extreme need that exists in our community, and I was very glad we could help her.”

Tickets for the show, which is being promoted by Lions Only Promotions and TGB Promotions in association with DiBella Entertainment, begin at $50 and are on sale now. Tickets can be purchased at ticketmaster.com, barclayscenter.com, or by calling 800-745-3000. Tickets can also be purchased at the American Express Box Office at Barclays Center. Group discounts are available by calling 844-BKLYN-GP.