Jarrell ‘Big Baby’ Miller vs. Trevor Bryan in the works for Jan.18 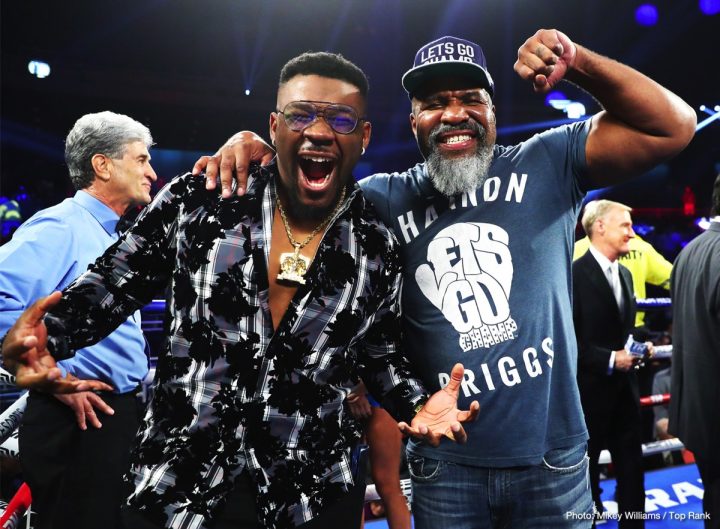 By Dan Ambrose: Interim WBA heavyweight champion Trevor Bryan (20-0, 14 KOs) and unbeaten #2 WBA Jarrell ‘Big Baby’ Miller (23-0-1, 20 KOs) are in negotiations for a fight on DAZN on January 18 at Madison Square Garden in New York, according to Dan Rafael. Miller’s co-promoter Greg Cohen, is working on the fight with Bryan’s promoter Don King. There’s no word about whether the vacant World Boxing Association ‘regular’ heavyweight title will be on the line or not for that fight.

Miller’s co-promoter Eddie Hearn of Matchroom USA-DAZN is hoping that he can fight for that belt as soon as possible. In fact, Hearn had hoped that the WBA would allow Miller’s last fight against little known fringe contender Bogdan Dinu would have the vacant WBA secondary title on the line for their bout last month on November 17, but the sanctioning opted not to do that. Hearn said that Miller will soon be winning the WBA title regardless.

“It’s the interim champion against the highest-rated contender and they’re both from New York. It’s a natural,” Cohen said to ESPN.com about the Bryan vs. Miller fight.

Bryan, 29, has an impressive 20-0 record, but he’s beaten mostly mediocre opposition during his seven-year pro career. Brayan won the interim WBA heavyweight title in stopping 39-year-old former cruiserweight world title challenger BJ Flores in the 4th round last August. Flores had been bouncing back and forth between the heavyweight and cruiserweight divisions for the last two years since 2016. Flores doesn’t belong at heavyweight at his age, and with his lack of size and punching power. Aside from Bryan’s win over Flores, his other notable win was against journeyman Derric Rossy in 2015. Rossy was a good fighter for many years, but by the time he met up with Bryan, he was well past his prime at 35. Rossy had lost 4 out of his last 6 fights by the time he met up with Bryan.

Miller, 30, can’t afford to lose this fight to Bryan, as hes being groomed by Matchroom Boxing USA boss Eddie Hearn for an eventual title shot against IBF/WBA/WBO heavyweight champion Anthony Joshua (22-0, 21 KOs). Hearn feels that a fight between Joshua and Miller can be a huge fight, both in the UK and U.S. Miller has been fighting frequently since he signed on with the British promoter Hearn, and he’s already fought three times in 2018 in beating Johann Duhaupas, Tomasz Adamek and Bogdan Dinu. One reason why Miller has been able to fight so frequently is the level of opposition he’s been facing. None of the guys that Hearn has matched Miller up against had any punching power to speak of, and in the case of Adamek and Duhaupas, they were older fighters. Adamek is 41-years-old, and Duhaupas is 37. In 2017, Miller fought 38-year-old Mariusz Wach, 41-year-old Fred Kassi, and 36-year-old Gerald Washington. They say that heavyweights mature late in their careers, and can hang around a lot longer than the smaller fighters. That might be true, but there’s no question that Miller has been fighting a lot of old guys in the last two years of his career.

Miller has got to get Bryan out of there without any mishaps for him to stay on course for a world title shot against Joshua in 2019 or 2020. Miller is still technically in the running for Joshua’s April 13 fight at Wembley Stadium, but most boxing fans feel that he has no chance of getting the with AJ at that time. Hearn wants to match Joshua against Dillian Whyte in a rematch, as it’s a fight that would interest the British boxing fans. Whyte is a popular fighter in his own right in the UK, and has become a Sky Box Office fighter. It’s hard to believe that the British public would want to pay to see Whyte fight, considering he’s not viewed as a big deal by fans outside of the UK. They note that Whyte looked terrible in winning a controversial 12 round split decision against Dereck Chisora in 2016, and that he fought well enough to deserve a loss in his poorly officiated win over Joseph Parker last March. Miller has a good chance of fighting Joshua in the second part of 2019 after Whyte gets his rematch with him.

The weight for Miller is going to be interesting to see for his fight against Bryan. After complaining of being weak last year in November 2017 in his fight against Wach, Miller’s weight has steadily been shooting up well over 300 lbs. Miller weighed a somewhat svelte 283 lbs for the Wach fight, and he complained that he was too light. Since that fight, Miller has bulked up and come into his last three fights at the following weights:

At some point, Miller is going to experience diminishing returns. He can’t keep eating what he wants and justifying it by saying he feels stronger when he’s big. It’s likely that the only reason Miller is getting away with being over 300 lbs for his fights is he’s not facing good heavyweights. Miller’s slow plodding style of fighting would make him a target for southpaw Luis ‘King Kong’ Ortiz, unbeaten 6’6″ Joe Joyce and 6’7″ Dominic Breazeale. Those guys would do well against a big guy that is there to be hit like Miller.

WBO middleweight champion Demetrius ‘Boo Boo’ Andrade (26-0, 16 KOs) is expected to be on the card as well making his first defense of his WBO title that he won on October 20 in beating replacement opponent Walter Kautondokwa by a 12 round unanimous decision. Andrade has a shoulder problem that he’s been dealing with, so it remains to be seen whether he’ll be able to fight on January 18. If so, it would be a voluntary defense against whoever his management feel comfortable putting him in with. There’s rumors that Andrade could face #4 WBO Maciej Sulecki. That would be a very tough opponent for Andrade to be fighting with him coming off of a shoulder injury. This wouldn’t be the same mismatch that we saw in Andrade’s last fight against a very raw looking fighter in Kautondokwa last October. Sulecki actually knows how to fight, and he’s got the size at 6’1″ to give Andrade a lot of problems.