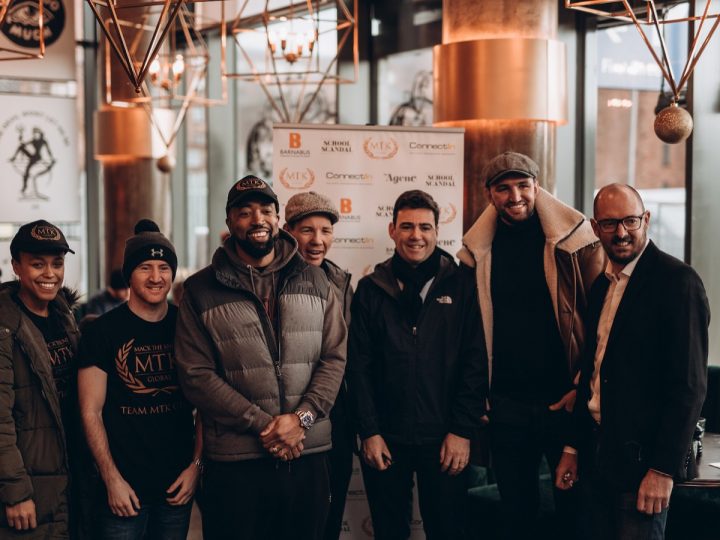 Global Boxing Management agency, MTK Global has teamed up with Manchester based restaurant and bar, School For Scandal, located on First Street to give the homeless and vulnerable of Manchester a Christmas breakfast.
Boxers including Tyson Fury’s brother, Hughie Fury and Natasha Jonas joined boxing promoter Johnney Roye and other MTK members to dish out a hot full English breakfast and warm drinks at the local restaurant.

The event put on by MTK Global and School For Scandal was orchestrated by PR firm, The AgenC and also saw other homeless advocates in attendance including Mayor of Greater Manchester, Andy Burnham and hairdresser Skullfades, who treated guests to a Christmas trim.

Owner of School For Scandal, Danny Fox said. “It’s the time of year when we overindulge and have smiles on our faces, but it’s important we take a step back and realise some people are not as fortunate as others. We wanted to open our doors to the homeless, needy and vulnerable of Manchester to give them something to smile about too and to ensure they had a something warm to eat and drink. MTK Global were the perfect partner for this and we are grateful for all of the boxers and team volunteers from the company today who helped make it a success”.

Sandra Vaughan CEO of MTK Global said. “A lot of people assume sports stars are very shallow, however this is far from the case, especially in the boxing world. A lot of our boxers at MTK come from humble roots and beginnings and understand struggle. Therefore none of them blinked an eye when asked if they’d be involved in this as they all felt very passionately about ensuring the homeless and vulnerable of Manchester were safe and looked after”.

Olympic heroes Paddy Barnes and Tasha Jonas were among an MTK Global team that joined Manchester restaurant School for Scandal in surprising a group of homeless people with a free meal.

Barnes and Jonas served at tables along with world heavyweight title challenger Hughie Fury and renowned trainers Johnney Roye and Nigel Travis as the Mayor of Manchester dropped in to lend his stamp of approval to proceedings.

During a short break from serving at tables, Barnes said: “I think it’s great. Homelessness is a serious thing all around the world and it’s great to see MTK Global boxers helping out along with School for Scandal – especially at this time of the year.

“It was good to see the mayor popping his head in too. I’ve just been giving out some breakfasts, talking to them and watching them get their haircut. I’m here to help.

“I’d say Johnney and Nigel are the best waiters. They’re very enthusiastic. I’m pretty sure they’re after jobs! Tasha Jonas has dropped two plates but I haven’t dropped any plates because I’m a legend.

“My wife used to be in the restaurant industry and says it’s a very stressful job. Boxing is a stressful job too at times but I’ll stick to getting punched in the face for a living!”

Jonas added: “I’ve been involved in some projects in Liverpool so I thought it would be great to get involved. I’m not sure I’ve seen Hughie with a plate though – we were doing all the graft!

“I’ve been talking to them. We’re all humans and it’s good to listen to their stories. We’ve been looking on the internet to where they can get some temporary accommodation.

“I’m a people person and I like to be surrounded by people from all different backgrounds. I like to listen to people’s experiences.”

Roye said: “School for Scandal have been fantastic. We’ve been chipping in whenever we can signing autographs and taking pictures. We’re just giving a little something back.

“Some of the homeless people are in that position through no fault of their own and with a little helping hand, we can change their situations.

“We’ve all done well today. Nobody stole any sausages, I promise! Today was absolutely fantastic.”

Fury said: “We’ve giving something back to the community – especially for people who are outside at this time of year because it’s freezing.

“It was nice to see people light up. Just to make that effort to come down only took five minutes. It was great to see the smiles on people’s faces.”

Travis said: “We’re here to try and give something back to those who are less fortunate. This is a time for giving. It’s a positive thing to be here to support this.

“I think it’s important to bring attention to the fact that there are people on the streets. The fact that Paddy Barnes is here is a big thing. He’s fighting in a couple of days’ time so for him to be around people eating full English breakfasts must be tough!”