Canelo vs Rocky – Fielding: “No one is giving me a chance against Alvarez” 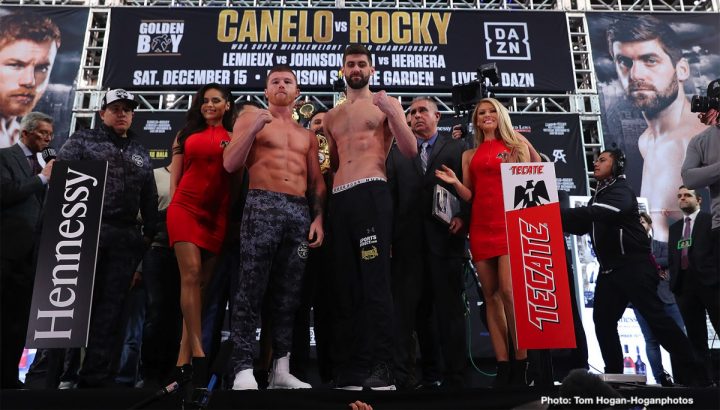 By Tim Royner: Rocky Fielding is not a happy camper about being overlooked by the boxing world for his title defense tonight against middleweight Saul Canelo Alvarez at Madison Square Garden in New York. The fans see Fielding (27-1, 15 KOs) as a slow, hittable fighter, with a fragile mandible, and with a fighting style that is made to order for the 28-year-old Canelo Alvarez (50-1-2, 34 KOs). Obviously, Canelo’s clever promoters Oscar De La Hoya and Bernard Hopkins have scouted out the 31-year-old Fielding, and deemed him as harmless to their gravy train fighter. Fielding is being brought as an easy mark for Canelo to pad his record with by winning a third division world title. Canelo also wants to win a world title at 175 potential, but that division will be a lot harder for him to crack, as there are no easy marks at this moment holding titles.

Golden Boy Promotions cannot afford to have Canelo lose this fight, as he’s generating so much money for them. Had Golden Boy selected one of the good super middleweights like Callum Smith, Jose Uzcategui, David Benavidez or Gilberto ‘Zurdo’ Ramirez, they would have something to worry about.

Fielding will be defending his World Boxing Association secondary super middleweight title against Canelo on DAZN at Madison Square Garden in New York. The only advantage that Fielding has in this fight, besides his size, is he’s getting Canelo with him coming off of a hard fight against former middleweight champion Gennady ‘GGG’ Golovkin on September 15. Canelo still has two cuts that haven’t fully healed from that fight, which took place only 3 months ago.

“We are talking about a guy who has only lost to Floyd Mayweather and who will become a three-weight world champion if he wins,” former super middleweight champion Carl Froch said to skysports.com about Canelo. “It’s a mission impossible and to be honest, if Rocky can take him the distance, that would be a massive achievement on its own.

Canelo can be beaten. We saw that not only in his loss to Floyd Mayweather Jr. in 2013, but also in his 2 fights against Gennady Golovkin, Austin Trout and Erislandy Lara. Those are all fights that Canelo could have lost with the right judging. The fact that all of those fights were close enough for Canelo to be considered the loser by a lot of boxing fans shows that he’s not unbeatable. It just takes good fighters with a clever approach to beating him. Golovkin got the better of Canelo with constant pressure, a hard jab, and occasional big shots. Lara out-boxed Canelo, and held him to just 31 head shots landed in the entire 12 round fight in 2012. Trout outworked Canelo, and kept him backed up against the ropes for the entire second half of their fight . The way that the judges tend to favor the highly popular Canelo means that Fielding is likely going to knock him out tonight for him to get the win. It won’t be enough to just appear to beat Canelo. Fielding will need to KO him. He can’t count on the judges to give him the decision. If GGG couldn’t get a decision over Canelo in two fights, a less than popular fighter like Fielding surely won’t be given a decision against him either. Fielding can’t assume that if Canelo wins a controversial decision over him that he’ll give him a rematch, because that’s not how the Mexican star works. He never gave Lara and Trout a rematch despite beating them by controversial decisions. Now that Canelo has a controversial 12 round majority decision victory over Golovkin, he’s showing very little desire of giving him a third fight despite the boxing world wanting to see the two face each other again.

It’s definitely mission impossible for Fielding, but there is a slight chance he could upset the apple-cart in this fight against Alvarez. Fielding will need to fight smart, use his jab and long reach in the first eight rounds of the fight. That’s when the 5’8″ Canelo is at his best. Due to his stocky physique, Canelo tends to fade after the 8th round, and he can get hit when he’s facing quality opposition like Golovkin. Fielding could take advantage of Canelo bulking up in this fight, and coming off a grueling contest against Triple G. Canelo’s stamina problems will likely resurface tonight if Fielding can take him deep into the bout, and push a fast pace. If Canelo has bulked up a little for the fight, it’s likely going to hurt his stamina tonight if Fielding can last long enough in the bout to get the Mexican star to where he starts to fade late.

Canelo will likely win tonight, but there’s a good chance that he won’t shine like he did in his last fight against Golovkin.