Eubank Jr. to fight in February in “Massive fight,” possibly against DeGale 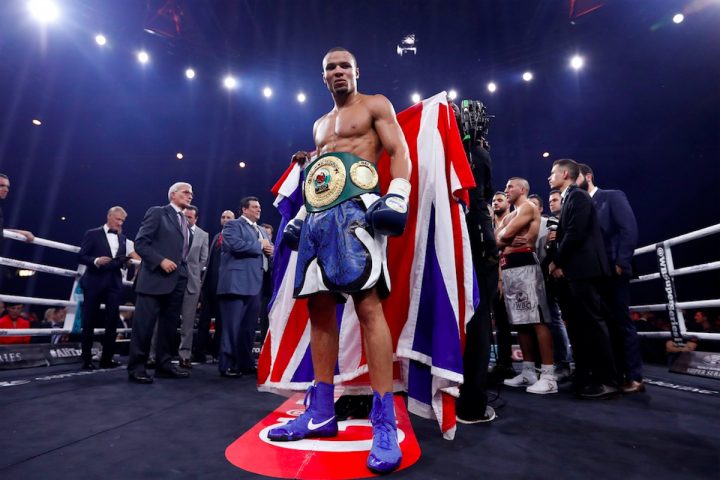 By Tim Royner: Chris Eubank Jr. says he’ll be returning to the ring in February in a huge fight. Former IBF super middleweight champion James DeGale is rumored to be Eubank Jr’s opponent. Eubank Jr. (27-2, 21 KOs) is trying to regain the momentum that he lost with his career in his one-sided 12 round unanimous decision defeat at the hands of former WBA Super World super middleweight champion George Groves earlier this year in the World Boxing Super Series tournament last February. Eubank Jr. was completely dominated by Groves in that fight.

The 29-year-old Eubank Jr. told Fighthype that he’ll be taking part in a “massive fight” in February. Eubank Jr. isn’t saying who the opponent will be, but the only guy that’s been talked about potentially fighting him is DeGale (25-2-1, 15 KOs), who has looked completely shot as a fighter recently. It’s likely that Eubank Jr. vs. DeGale would be sold on pay-per-view in the UK to reluctant but willing boxing fans, many of which won’t mind paying to see these two face each other. It would be better off for DeGale and Eubank Jr. to get a few solid wins under their belts before they face each other, as it’s too soon for them to be fighting after they were both soundly beaten.

There’s always a chance that Eubank Jr. could get lucky and land a fight against Saul Canelo Alvarez in his next fight. However, Canelo isn’t fighting in February. His next fight will take place in May, so that rules out a fight between Eubank Jr. and Canelo.

It might tarnish Eubank Jr. to be involved in a fight against a fading fighter like DeGale, as there’s nothing to gain for him taking the fight. The boxing public largely views DeGale as on the downside of his career, and it would look bad for Eubank Jr. to be trying to fight him right now.

DeGale has arguably lost three out of his last four fights since 2017. He was given a controversial 12 round draw against Badou Jack in a fight that he appeared to lose in 2017. After that, DeGale was beaten by bottom #15 IBF fringe contender Caleb Truax by a 12 round majority decision last year in December 2017. DeGale came back from that fight, and defeated Truax a questionable 12 round unanimous decision. DeGale appeared to lose again, but the judges gave him a decision. Boxing News 24 had Truax winning a comfortable 12 round unanimous decision by a 118-110 score. DeGale was not competitive at all against Truax, and spent most of the fight clinching.

Eubank Jr. has a lot of options available to him for interesting fights at super middleweight if he wants to fight good opposition, but there are only a small handful of fighters that would interest the boxing public in the UK. Eubank Jr. vs. DeGale would be big, because both guys are so well known. It’s a fight that sells. Eubank Jr. could face Callum Smith, Rocky Fielding or George Groves, and those would fit the description of being “massive fights.”