David Lemieux off Canelo-Fielding card due to dehydration 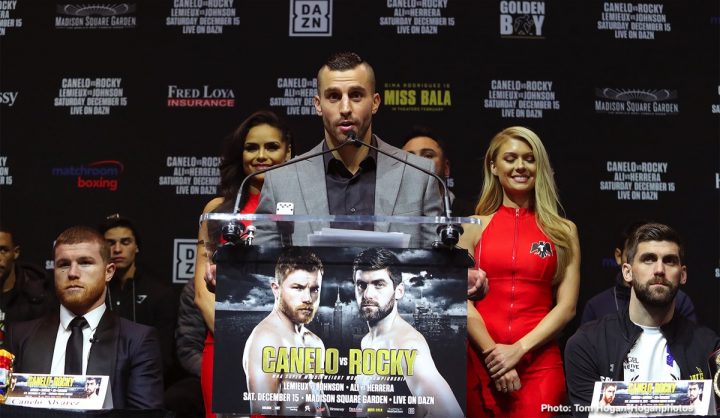 By Allan Fox: David Lemieux has pulled out of his fight against Tureano Johnson for Saturday’s Saul Canelo Alvarez vs. Rocky Fielding card, according to the latest boxing news. Former IBF middleweight champion Lemieux (40-4, 34 KOs) reportedly had weight problems that led to him being dehydrated, and needing to be taken to the hospital, according to Dan Rafael. As such, the 29-year-old Lemieux is off the card. Lemieux had looked thin during the final press conference this week. The effort to make the 160 lb weight limit obviously was too hard for Lemieux.

This is a continuation of the problems Lemieux has been having involving his weight for the last two years since 2016. Lemieux had a fight with James De La Rosa fall apart after he failed to make weight for that contest. Lemieux would continue to battle weight problems in his fights against Billy Joe Saunders and Karim Achour. Lemieux surprisingly made weight for his last fight against Gary ‘Spike’ O’Sullivan on September 15 on the undercard of Saul Canelo Alvarez vs. Gennady Golovkin II.

This is disappointing news for Golden Boy, Canelo Alvarez and most of all for boxing fans. Lemieux vs. Johnson was arguably the best fight on Saturday’s card by a long shot. There’s nothing wrong with Canelo vs. Fielding, other than it being a mismatch. Fielding is a limited fighter at super middleweight, and wouldn’t be a world champion if he had to fought someone talented for his WBA secondary 168 lb title. Fielding won his strap off Tyron Zeuge, a guy that wasn’t well thought of by a lot of boxing fans. Lemieux-Johnson would have been a real interesting fight. Unlike the main event between Canelo and Fielding, Lemieux vs. Johnson was a 50-50 fight. It was a great match-up with a lot on line for both guys. The winner of the fight was viewed as having a good shot at facing Canelo on May 4.

The ramifications of Lemieux pulling out of the Canelo-Fielding fight due to weight problems will make it more difficult for Golden Boy Promotions to justify matching Canelo against the Canadian fighter on May 4 in the Mexican star’s next fight on Cinco de Mayo at the T-Mobile Arena in Las Vegas, Nevada. Bernard Hopkins of Golden Boy Promotions leaked the information this week that Lemieux is one of the two options that they have for Canelo’s May 4th fight. The other guy that Golden Boy is interested in matching Canelo against is IBF middleweight champion Daniel Jacobs, who has squeaked by his last two opponents Sergiy Derevyanchenko and Maciej Sulecki in winning a pair of 12 round split decisions.

Jacobs would be a more difficult opponent for Canelo due to his size, reach, speed, power and conditioning compared to Lemieux. If Golden Boy choose to still use Lemieux for Canelo on May 4, then they might need to raise the weight from 160 to 168 in order to accommodate the Canadian fighter. It would be too risky for Golden Boy to schedule Canelo vs. Lemieux at middleweight. The World Boxing Council would have to give Canelo their blessing for another super middleweight fight rather than him defending his WBC middleweight title against one of the contenders. That would look bad on the WBC’s part to allow Canelo another fight at super middleweight without defending his WBC 160 lb title. The WBC might as well strip Canelo if he chooses to continue to fight at super middleweight and not face his mandatory challenger Jermall Charlo.

Lemieux has been resisting moving up in weight to super middleweight, but it looks like he’s going to need to make that move whether he wants to or not. He’s having too many problems trying to make the 160 lb weight limit, and he can no longer be counted on to make weight each time out. When it gets to the point where Lemieux is being hospitalized for dehydration due to his problems trying to make weight at 160, then that’s a clear sign that he needs to move up to 168. At this point, even 168 might be a problem for Lemieux. He’s a huge guy that should have made the move up to super middleweight a long time ago. The thing is, Lemieux could end up at light heavyweight before long. Eight extra pounds is nothing when you’ve got the size that Lemieux has. Lemieux’s promoters at Golden Boy can’t continue to schedule him for fights at middleweight if he can’t make weight for the division. That would be an insane move on their part.

The major downside of Lemieux moving up to super middleweight is the fact that he’s going to be too small to fight in that division. To be sure, weigh-wise, Lemieux will be big enough to fight at super middleweight, but in terms of his height, he’s going to be way too short to be fighting in that division. The top guys at super middleweight are all 6’2″ and above. Believe it or not, the 6’1″ Fielding is the shortest of the current super middleweights, and he’s viewed as the weakest link among the champions. WBA Super World champion Callum Smith is 6’3″, WBO belt holder Gilberto Ramirez is 6’2 1/2″ and IBF champion Jose Uzcategui is 6’2″. If tiny 5’9″ Lemieux tries fighting those guys, he’s going to get worked over from the outside by those fighters, and likely easily beaten in the same way he was by Billy Joe Saunders and Gennady Golovkin. It would be the same problems Canelo would have if he tried to campaign in the super middleweight division against the quality fighters instead of weaker fighters like Fielding.

It’s going to look absolutely ridiculous on Golden Boy’s part if they pick Lemieux as Canelo’s May 4 opponent instead of Jacobs or Jermall Charlo. Golden Boy needs to select someone that can be counted on to make the 160 lb weight limit so that Canelo can defend his WBA/WBC middleweight titles. If Canelo is going to fight consecutive fights at super middleweight while effectively freezing his WBC middleweight title, then he needs to vacate the belt so that other fighters can fight for it.

The Canelo-Fielding card also won’t have light welterweight prospect Vergil Ortiz Jr., as he pulled out of the card due to the New York State Athletic Commission not licensing him because of Lasik eye surgery.