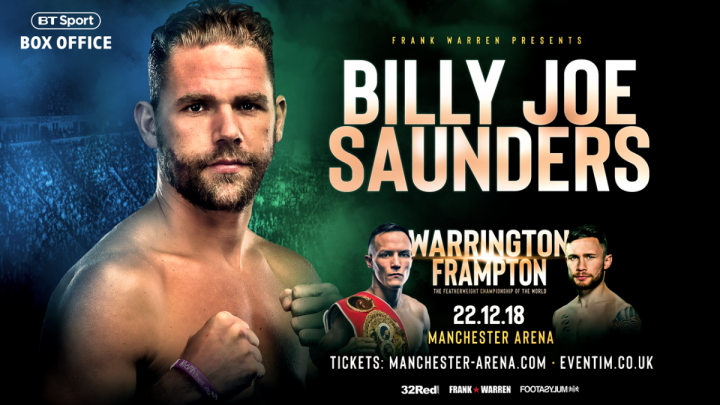 By Tim Royner: Former WBO middleweight champion Billy Joe Saunders will be back in action on the undercard of Josh Warrington vs. Carl Frampton on December 22 to face 33-year-old Hungarian journeyman Zoltan Sera at the Manchester Arena in Manchester, England. Warrington-Frampton will be streamed on ESPN+. This is a stay busy fight for the 29-year-old Saunders (26-0, 12 KOs), who hasn’t fought in a year since his 12 round unanimous decision win over former IBF 160 lb champion David Lemieux last year on December 16 in Canada.

Adding Saunders to the Warrington-Frampton card against a journeyman level fighter in Sera won’t bring much value to the card. Some boxing fans will obviously be delighted at hearing the news of Saunders fighting on the Warrington vs. Frampton card, but they won’t be thrilled to hear that he’s facing a no name fighter. Saunders is 29-years-old. He should be fighting better opposition each time out.

Saunders recently tested positive for a banned substance, and he then subsequently ended up vacating his WBO middleweight title after the Massachusetts State Athletic Commission failed to license him for his previously scheduled title defense against Demetrius Andrade on October 20 at TD Garden in Boston, Mass. Andrade faced replacement opponent Walter Kautondokwa, and defeated him with ease by a 12 round decision. Saunders isn’t currently suspended in the UK.

Saunders is hoping to recapture his World Boxing Organization middleweight title in 2019. There’s a very good chance that he could get a title shot against Andrade. Matchroom Boxing USA promoter Eddie Hearn has sounded agreeable recently in the idea of Andrade defending his WBO title against Saunders, as that’s a fight that would go over well in the UK. It won’t mean a lot for the American boxing fans, but some people will like watching it. The U.S boxing fans want to see Andrade fight the likes of Gennady Golovkin Saul Canelo Alvarez, Jermall Charlo and Daniel Jacobs. They want to see Andrade face exciting fighters that will come to fight, and not run around the ring for 12 rounds.

Sera has lost 6 out of his last 13 fights since 2017. Of those defeats, Sera’s most notable opponents of those bunch are D’Mitrius Ballard and Ahmed Elbiali. Sera has been fighting at light heavyweight recently. Moving back down to middleweight to face Saunders could potentially be a problem for Sera. But then again, he’s not expected to give Saunders any kind of competition on December 22.

Saunders had two fights against former four title world title challenger Martin Murray wind up being canceled due to injuries that he suffered. The boxing public weren’t too excited about seeing Saunders given a world title shot against Murray given that the Liverpool fighter had done very little to earn another title shot after failing on four previous tries against other world champions. It was an unfortunate thing for Saunders to have his fight against Murray canceled, as he was coming off of a career-best victory over Lemieux last December. It would have been good for Saunders to keep the momentum going with his career by beating Murray in an impressive fashion.

Saunders had been plagued with injuries and canceled fights since he first captured the WBO 160 lb title in 2015. He wanted to fight Gennady Golovkin in a unification fight, but the two were never able to put a fight together. That would have been a nice payday for Saunders to fight GGG. It’s still too late for Saunders and GGG to fight each other, but it’s not an ideal time right now. Golovkin (38-1-1, 34 KOs) lost his last fight to Saul Canelo Alvarez last September, and Saunders is no longer the WBO champion after vacating his belt. If GGG and Saunders can recapture their belts, then a fight between them would be an interesting match-up.

Guillermo Rigondeaux to fight in January »