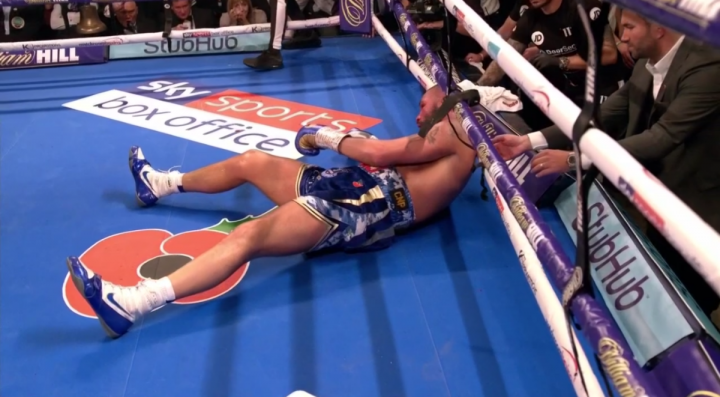 Matchroom Sport promoter Eddie Hearn will likely try and lure Bellew out of retirement for any mouthwatering fight that comes around. Andre Ward would be a match that might tempt Bellew to return to the ring for the right amount of money. Bellew wouldn’t have to worry about Ward’s punching power like he did with the southpaw Usyk, who isn’t known for being a puncher, but he was able to hurt Bellew with a left hand in the 8th. Moments later, Usyk hit Bellew with another big left hand that dropped him flat. Bellew was done for the night after getting dropped, and the fight was stopped on the spot.

Bellew says “this is definitely the end” for him as a professional fighter. This is no surprise though, as Bellew, 35, had been talking about this being his last fight for months. The fact that Bellew lost the fight by a knockout makes it an easier decision than if he had lost by a close decision.

Bellew can be proud that he gave Usyk, 31, a lot of problems before folding in the 8th round on Saturday night on Sky Box Office at the Manchester Arena in Manchester, England.

“He’s an exceptional fighter who deserves all the awards in the world. I lost to one of the pound-for-pound best,” Bellew said after his loss to Usyk.

Bellew, 35, gave it his best shot to try and get the ‘W’, but in the end, he was figured out by the younger, more talented 31-year-old Usyk and stopped in the 8th round. If this had been a 7 round fight, Bellew would have won. Two of the judges had Bellow up at the time of the stoppage in the 8th. Unfortunately for Bellew, he wasn’t fighting a seven round fight tonight, and he ended up losing to the better conditioned Usyk.

“I’m a world class fighter. But that was the difference between world class and elite level,” Bellew said. “I have no excuses. He is an amazing fighter. He is the greatest man I have ever shared a ring with. I wish [him] greatness. He’s so hard to pin down. Exceptional,” Bellew said.

The problem is, Bellew wasn’t trying to pin Usyk down. That’s why Bellew lost. Bellew was always sitting back, waiting for Usyk to throw a punch so that he could land a big counter. Bellew failed to use his feet to pursue Usyk around the ring. Had Bellew used his wheels to get to Usyk, there’s no telling what the result would have been. All we know is Bellew sat back and let Usyk to dictate the pace of the fight.

“Anyone that faces him is in a lot of trouble. Only the very best, and the very biggest, will find a way to beat him,” Bellew said.

Bellew’s last comment about only the “very biggest” being capable of beating Usyk is a big hint that he thinks heavyweight champion Anthony Joshua will beat Usyk when the time comes for them to face each other in a year or two.

NEWS:   Hearn to make announcement on Monday for his three May shows