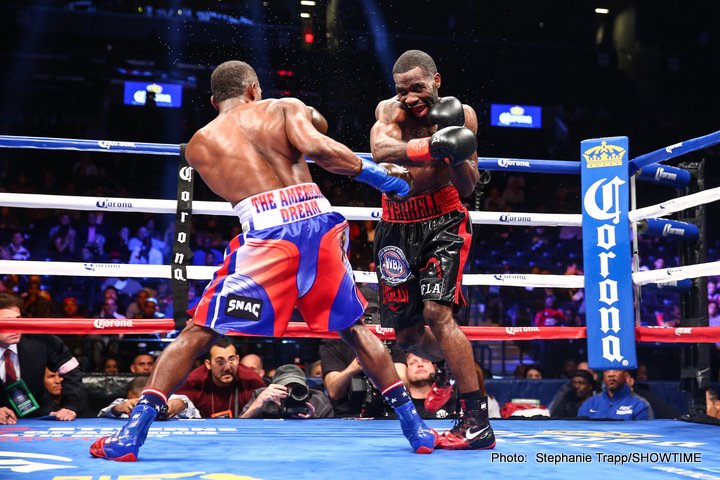 U.S. Olympian and super welterweight contender Terrell Gausha clashes with battle-tough veteran Joey Hernandez in a 10-round bout and former two-division world champion and Cuban star Rances Barthelemy competes in a 10-round super lightweight fight, while heavyweight sensation Efe Ajagba, who is shaking up the division as a fearsome puncher, enters the ring in a six-round attraction all as part of an action-packed undercard on Saturday, December 22 from Barclays Center, the home of BROOKLYN BOXING™ and presented by Premier Boxing Champions.

The stacked undercard leads into a blockbuster PBC on FOX show that features the Charlo Twins defending their world titles, and a heavyweight showdown between Dominic Breazeale and Carlos Negron in primetime. Jermall Charlo, who won a coin toss with his brother to determine their fight order, will headline the show in a 12-round WBC interim middleweight championship bout against Willie Monroe, Jr., while Jermell Charlo will defend his WBC super welterweight world title against Tony Harrison.

Tickets for the show, which is being promoted by Lions Only Promotions and TGB Promotions in association with DiBella Entertainment, begin at $50 and are on sale now. Tickets can be purchased at ticketmaster.com, barclayscenter.com, or by calling 800-745-3000. Tickets can also be purchased at the American Express Box Office at Barclays Center. Group discounts are available by calling 844-BKLYN-GP.

The 31-year-old Gausha (20-1, 9 KOs) lost for the first time of his career when he dropped a unanimous decision to Erislandy Lara in a super welterweight title match in 2017 at Barclays Center. A member of the U.S. boxing team at the 2012 London Games, Cleveland’s Gausha is looking to rebound against Hernandez.

Hernandez (27-4-1, 17 KOs) has strung together three straight knockout victories since losing to Austin Trout in 2015 on FS1. A 34-year-old southpaw from Miami, Hernandez is coming off a TKO victory over Jose Antonio Rodriguez on August 8.

A prolific amateur in his native Cuba, Barthelemy (26-1, 13 KOs) returns to the ring after the first defeat of his career, in a super lightweight world title fight against Kiryl Relikh in March. The 32-year-old became a world champion in 2014 when he defeated Argenis Mendez to capture a 130-pound title, and became a two-division champion when he bested Denis Shafikov for a vacant lightweight belt.

Ajagba (7-0, 6 KOs) grabbed attention this summer when his opponent walked out of the ring after touching gloves and the bell sounded to start the opening round live on FS1. He is the lone opponent to leave the ring unscathed against the 24-year-old Ajagba, who was a member of the Nigerian boxing team in the 2016 Rio Olympics and will step into the ring for the fifth time this year and for the second time at Barclays Center as a pro.